Animal welfare is a difficult topic, but also an important responsibility 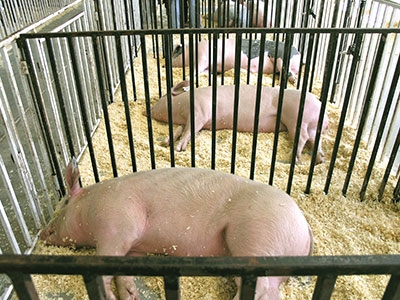 It may seem that success is impossible where animal rightists are concerned, but it is crucial to strive for continuous improvement in animal welfare.

Ethics are about what’s right and what’s wrong, and can be based on tradition, religion, laws or popular beliefs.

Simply put, animal welfare is about ethics, says Tim Blackwell, lead veterinarian in Swine Disease Prevention for the Ontario Ministry of Agriculture and Food. “It’s about the responsibility we have for animals in our care.”
But, what should farmers say when that responsibility is questioned?

The Beginnings of Animal Welfare
Animal welfare concerns have been around a long time. In 1867 the American Society for the Prevention of Cruelty to Animals (ASPCA) Act was passed into law, and in 1868, the ASPCA took its first case under the act to court, arguing that the shipping of sea turtles for meat from the southern U.S. to New York City was inhumane. The live turtles were flipped over with their flippers wired together so they could not right themselves for seven to 10 days on a boat.

However, the judge refused to hear the case – he wasn’t about to turn seamen and turtle hunters into criminals. The New York press stood behind the judge, calling animal rights supporters fanatics who were completely out of touch with societal norms.

Blackwell says the public “went nuts” in response because they had no idea this was going on. Large numbers of New Yorkers began to donate time and money to the ASPCA and the organization went from a one-man operation to the large and very influential body that it is today.

“Some think we can ignore what the public thinks is right and wrong,” continues Blackwell. “But livestock agriculture has lost every case with the Humane Society of the United States (HSUS) to date, and if we ever win a case, it will be the sea turtle scenario all over again. We will come off looking bad in the eyes of our customers.”

What to Say?
So when questions of animal welfare arise, what should farmers do?

One response that doesn’t work is that we cannot feed the world without the highly restrictive housing of livestock – Blackwell asserts that this is not true and not believable.

Neither is the concept that animals don’t have rights because animals cannot comprehend rights or argue on their own behalf. “It is a truly compassionate society that establishes rights for the weak, the powerless and the most vulnerable,” continues Blackwell. “Animal rights are entitlements that society chooses to bestow on animals, those being the legal right to food, water, shelter and medical care for all domestic animals in Canada.”

There is an unfair belief that all animal rights activists are extremists, but Blackwell says the majority of customers are middle-of-the-road, animal rights moderates. “A lot of customers just believe in avoiding unnecessary suffering,” he adds “To misjudge or mislabel them is to risk losing their trust.”

Sometimes it may feel as if animal welfare groups will never be satisfied so there is no point in working with these people.

But Blackwell says that is wrong. “We must commit [for example] to continuous improvement in all areas of swine production. Improvement is always a continuous process.“

For a perfect example we have only to look at factory reforms over time.

In 1802, the U.K. declared that factories needed to have proper ventilation and owners cried that the changes would put them out of business. In 1819, they argued that a 12-hour day for nine- to 16-year-old children would leave them broke.

Change is slow, but a very important step in the evolution of business.

Blackwell draws a parallel from back then to what farmers are saying today, that making changes could be bad for business. “It looks ridiculous but that’s where we are right now.”

What about supporting animal welfare that is based on solid science? Blackwell believes we should not use it to deny what we should do. Once we determine how animals should be treated, scientists can help us determine how, or even if, we can achieve our goals.

Using the example of castrating piglets and pain control, Blackwell says science can tell us what pain control is and what works, but not if we should provide it to the animals.

If undercover videos surface that call into question certain animal welfare incidents, Blackwell says to respond by saying that extreme cases are not by any means the norm. “Immediately and without reservation condemn inappropriate behaviour whenever and wherever it occurs,” he advises. “Kicking a sow in the head is wrong – just say we never condone such behaviour.”

What about the argument that since productivity is increasing, welfare must be as well? Blackwell argues that they are not the same, and that citing standard industry practices is not a sound defence either. While many practices may be legal, legal is not necessarily moral. “Fifteen states are making some housing situations illegal,” says Blackwell. “[But] winning in a court of law can be a loss in the court of public opinion.”

It is easy to dismiss animal welfare questions by saying that urban residents think pigs should be treated like pets. In their defence, Blackwell points out that urban Canadians, like all Canadians, believe in the humane treatment of all emotionally responsive creatures because our sense of justice and compassion extends to the most vulnerable members of our society and to avoid unnecessary suffering.

How then do livestock farmers to explain their practices to the general public? Blackwell says the public believes livestock farmers are ideally qualified to ensure animal welfare is protected, but you must be careful, he warns, as you could lose that trust. And once that trust is lost, it can be very difficult to get back.

The Best Policy
“Our religions and culture hold stock people in high esteem,” adds Blackwell. “The public expects livestock producers to be the real experts on animal welfare.”

He suggests that farmers openly engage in discussions on animal welfare issues and acknowledge areas of concern. The main principle behind the discussion is: reduce unnecessary discomfort wherever possible.

As Blackwell advises, just be honest. It is the best policy, after all.