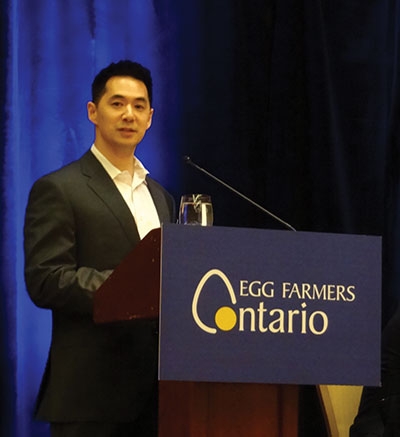 While a small sample set was used, George Yeung says early trials show that Rellidep has benefits over other antidepressant drugs currently on the market. UPA and Lilian Schaer

Eggs, it can be said, have had their fair share of the media spotlight. There was a time when it seemed they were to be blamed, solely, for high cholesterol and, (if we really want to exaggerate), for the heart attacks of many an unsuspecting consumer. Now, as with many dietary staples, it’s generally accepted that when consumed in moderation, eggs can be part of a healthy diet.

Most readers will be thinking, “well, we knew that all along, it’s common sense”. And, like many, other examples of bad media, the only thing to do was to ride out the unwanted publicity storm.

What do you do when the reverse is true, though – when ground-breaking research shows that eggs may be the answer to one of the most crippling conditions a person can suffer? Well, if you’re Egg Farmers of Ontario (EFO), you support further work on the subject and view it as a research and development investment.

Thus, on March 26, EFO announced at their annual meeting in Mississauga that they will provide $1 million to United Paragon Associates (UPA), an Ontario-based privately-held pharmaceutical developer, to fund clinical trials for a new antidepressant drug that could help millions of people, worldwide, who suffer from Major Depressive Disorder (MDD).

Cleverly named Rellidep™* (after former hockey great, Ron Ellis, long-time champion in the fight against MDD, and UPA’s Vice-President of Public Relations) it would be an understatement to say that there are high-hopes for Phase 2 of clinical trials.

If any of this sounds familiar, it shouldn’t. EFO has never before supported such work. In fact, when it comes to commodity groups, Ontario’s egg board is probably the only group in Canada currently funding the development of a human health drug. And whether you eat eggs or not, depression is very likely a condition that has affected you or someone very close to you.

According to the Canadian Mental Health Association’s Website, “depression is a term used to describe a long period when a person is sad to the point of feeling worthless, hopeless and helpless. It can be caused by stress, a loss, or a major disappointment, but sometimes, it seems to happen for no particular reason at all – the result of a chemical imbalance in a person’s body.” Statistics Canada’s 2002 Mental Health and Well-being Survey showed that 5.3 per cent of the Canadian population aged 15 years and over had reported symptoms that met the criteria for MDD in the previous 12 months, including 4.8 per cent for major depression and 1 per cent for bipolar disorder.

When EFO was approached by UPA, they were told that the company had found that fertilized eggs could play a key role in alleviating depression. Given the millions of Canadians battling the disorder and the simple “good news story” that could come of it, it was a no-brainer for Ontario’s egg farmers to get behind the work.

“I got introduced to it last fall,” said EFO chair Scott Graham. “Our general manager, Harry Pelissero, had been introduced probably a year previous to that. We’ve signed a letter of intent for a million dollars that we hope is going to be a stimulus to help [UPA] raise another $7.5 million [to undertake] a second clinical trial.”

Graham is hopeful the results will be as favourable as they were in the first trial. Those findings indicated that Rellidep may be more successful in alleviating depression than other drugs currently on the market, while at the same time resulting in fewer and less disruptive side effects.

“Despite recent advances in treatment, there continues to be great unmet need specific to three key areas in the fight against major depressive disorder,” George Yeung, UPA’s president of Research and Development told the audience in Mississauga. “Early phase trials with Rellidep have demonstrated tremendous promise, as it may offer improvements over currently available drug treatments in three areas. Potentially better efficacy, shorter time-to-clinical-benefit and significantly fewer side-effects were observed.  We are hoping to see similar results in the next phases of our research.”

At a certain stage of development, Yeung explained, a specific molecule is taken from embryonic stem cells in fertilized eggs through a proprietary and patented process. It then forms the foundation of the antidepressant, Rellidep. While he agrees with Graham that early results were encouraging, he emphasized that the sample set was small.

With a mandate to explore potential uses of eggs and expand the market, this investment seemed like a great fit for EFO, although its $1 million won’t kick in until UPA raises the remaining $7.5 million to go ahead with Phase 2 of the clinical trials. EFO, according to Graham, was also keen to keep the research in Canada (specifically Ontario) by supporting UPA. Besides that, he cited the innovative nature of the research, the fact that it is not food-related and its potential economic impact as draws for EFO to infuse money into the project. Speaking to a small group of reporters after the announcement was made, Graham’s emotions were evident when he talked about the humanitarian implications of the new drug, should it reach the market.

There is, however, much work to be done before the drug gets to that point. Yeung explained that even if the money needed for Phase 2 is procured, it could be years before the drug is at the point where it can be prescribed. And likely, Rellidep would be out-licensed to a larger multinational pharmaceutical company after Phase 2, so there are still a lot of unknowns, he added. It could take longer than six years for Rellidep even to be approved for human use.

For now, the needed $7.5 million to start up the next trial phase is the most crucial factor for UPA to tackle in getting the drug to market. For Ron Ellis, though, that figure dwindles in comparison to the statistics around economic loss related to depression. In reference to published studies, he said, “the economic cost of lost productivity in Ontario due to depression, as measured by short-term and long-term disability days, is estimated to have been $8.8 billion in Ontario in 2000. Costs due to depression are estimated to have been over $2 billion in Ontario in 1998.”

Thus, for Ontario’s 440 egg producers, there is a collective holding of breath to see how this potential great news story ends. Stay tuned.

* Rellidep is a trademarked product.