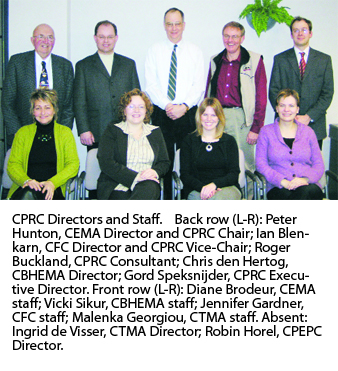 The study, sponsored by the Canadian Agri-Food Research Council and the Canada Branch of the World’s Poultry Science Association, examined Canadian poultry research needs and capacity.  The study identified a need for a national body to coordinate poultry research, education and technology transfer.

Each member pays a fixed annual sum to the Council for administration.  For reasons of cost saving and simplicity, the Poultry Industry Council (PIC) administers CPRC’s affairs on a contractual basis.

The first activity of the CPRC was to convene a symposium to identify research priority program areas, and this was held in Ottawa in December, 2002.  CPRC has made involvement of all stakeholders a first priority.

Thus, delegates from all of its members, all branches of industry, and from research institutions, universities, provincial and federal governments have been involved in all of its public affairs.

Following that first symposium, it was clear that the first priority was to intensify research in the field of avian gut microbiology.  The reasoning behind this was the possibility that a variety of antimicrobials might be withdrawn from use as feed additives in the near future.

A thorough understanding of how these additives worked, how the microbial flora of the chicken gut functioned with and without them, and what strategies might be used in their absence, was clearly needed. CPRC held a workshop for all scientists interested in this field in June, 2003 at the University of Guelph.

About 20 scientists from universities, government and industry attended.  All were working in the general area of avian gut microbiology, but many did not know each other.  One of the outcomes of the workshop was the formation of AVIMICRONET, a loose association of scientists working in the field.

The other was a call for proposals from CPRC to conduct new two-year research programs in the field of avian gut microbiology.  From the submissions, four proposals were accepted and funded by CPRC, totaling $353,000.  This funding was provided by all CPRC member organizations.  The projects are:

Identification of gut bacteria affected by dietary antibiotics and their roles in the gut immunity of broiler chickens.
Primary Researcher: Joshua Gong, Agriculture and Agri-Food Canada.
Molecular Epidemiology of Necrotic Enteritis.
Primary Researcher: Patrick Boerlin, Ontario Veterinary College,  University of Guelph.
Carbohydrase Enzyme Supplements as Growth Promoters and Modulators of the Intestinal Microflora of the Chicken: The Prebiotic and Probiotic Effect of Enzyme Hydrolysis Products.
Primary Researcher: Bogdan Slominski, University of Manitoba.
Understanding how Campylobacter jejuni Colonizes Poultry.
Primary Researcher:  Brenda Allan, VIDO, Saskatoon.
These research programs began in 2004 and are scheduled for completion in 2006 or 2007.  As a direct consequence of their funding by CPRC, additional research dollars were attracted through matching programs from various government agencies, and the total amount involved is now over $800,000.
The second priority area addressed by CPRC is that of environment.  While the area of avian gut microbiology is easily defined and relatively narrow, environmental concerns are extremely broad.
The Council held a workshop at the University of Alberta, Edmonton, in Spring 2004.  A subsequent call for proposals followed, and six were recommended for funding by CPRC Directors.  By this time, the Council had established a partnership with the Natural Sciences and Engineering Research Council (NSERC) and the proposals were submitted to its NSERC/AAFC program, which matches industry dollars 2:1.  Of the six submitted, the following four projects have been approved for funding.
Development of a Dynamic Model of Calcium and Phosphorus Flow in Layers.
Primary Researcher: James France, University of Guelph.
Activity-specific Workplace Exposure of Poultry Barn Workers.
Primary Researcher: Sentil Senthilselvan, University of Alberta .
Distribution Uniformity and Emission Reduction Potential of a Precision Applicator for Surface and Sub-surface Land Application of Poultry Manure.
Primary Researcher: Claude Lague, University of Saskatchewan.
Reducing Pollution from Veterinary Pharmaceuticals in Agricultural Runoff from Poultry Manure.
Primary Researcher: Shiv Prasher, McGill University.

Meanwhile, the Council held its second priority-setting workshop in Ottawa, jointly with Agriculture and Agri-Food Canada (AAFC) in May, 2005.  In general, the priority program areas identified were similar to those from the 2002 symposium, and are as follows:
• Food Safety
• Animal Welfare
• Poultry Health and Disease
• Antibiotic Replacement
• Environmental Concerns
• Product Development/ Value Added Products

Subsequently, the Council issued a call for proposals in the areas of food safety and poultry health, and 11 proposals were received in December, 2005.  They are currently being reviewed by the Council’s Scientific Advisory Committee, and decisions as to funding will be made by the CPRC Directors during 2006.

Another conclusion from the 2005 workshop was that AAFC, on behalf of the federal government, should become a major contributor to poultry research.

Prior to the closure of the Food and Animal Research Centre in Ottawa in the late 1990’s, AAFC had a strong presence, with as many as 17 scientists devoted full-time to poultry research.  Since then, this has diminished to the point where there is one full-time position in Agassiz, B.C., and a vacancy for a scientist in Nova Scotia.

A few scientists at the Food Research Laboratory in Guelph, and elsewhere across the AAFC laboratory system, devote significant effort to poultry as part of their work, but this effort is not in proportion to the contribution of poultry to agricultural income in Canada.

CPRC continues to press for additional AAFC resources to be devoted to specific research in key areas of poultry science.

Finally, the 2005 workshop recommended that CPRC should coordinate Canadian poultry research and future poultry industry networking and extension events.  The two major events in 2002 and 2005, and the smaller workshops on avian gut microbiology and the environment attest to CPRC’s capability to mount this type of activity.  More will follow.  For the complete report of the 2005 workshop, visit the CPRC website [www.cp-rc.ca].

In its relatively short existence, the Council has mobilized over $2 million for poultry research in Canada, through direct funding and matching grants.  The CPRC Board of Directors believes this is “a good start.”