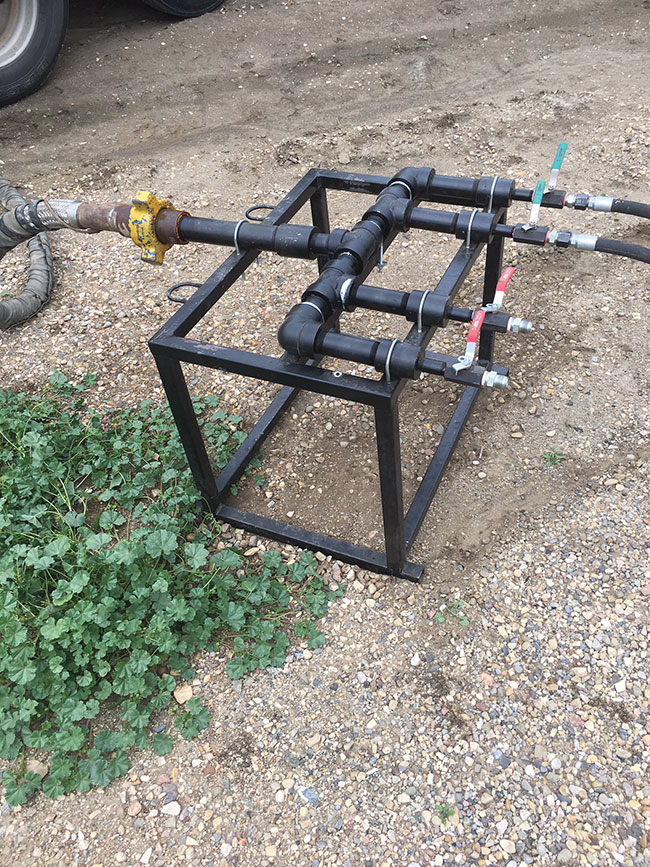 A manifold for delivering CO2 to a barn.

Poultry industries are in the middle of a maelstrom of change that has revolutionized poultry management, housing, transport and slaughter. The driving force behind many of these transformations is animal welfare.

Laying hens are the only poultry commodity that lack an obvious strategy for birds at the end of production. There are few options for laying hen slaughter, and with new transportation regulations, some areas may no longer have slaughter as a viable option. There are also occasions where broilers or turkeys are unable to be slaughtered, yet need to be taken out of the barns for humane or management reasons. This results in large numbers of birds that producers must remove safely and humanely.

There are several strategies for mass depopulation. All of them are based on the use of carbon dioxide (CO2) to euthanize birds, either in their barn or in containers.

CO2 is a nearly ideal gas to use for the purpose of mass destruction. That’s because it is relatively easy and inexpensive to produce, is non-flammable, non-corrosive and leaves no residue when it disperses (although swarms of mosquitos are often attracted to high concentrations of CO2, which could be considered an annoying residue, albeit short term).

Exposing birds to increasing levels of CO2 results in biochemical changes in the blood, sedation of the birds and eventually death.

The biochemical changes effectively make CO2 act as a sedative drug. At moderate levels (around 40 per cent CO2), death occurs after approximately three minutes. Unconsciousness occurs well before this.

When concentrations of CO2 are gradually increased, the birds feel little aversion. There is evidence that chickens will feel breathless, yet the aversion was insufficient to keep the birds from entering a CO2 enriched environment to get to companions when the concentrations were raised up to 60 per cent.1 CO2 has been approved as a humane method of euthanasia by the American Veterinary Medical Association.

It is important to note that exposure to CO2 does not affect the birds the same way as suffocation, and it also doesn’t need to be in high enough concentrations to cause the birds to become deficient of oxygen. Gasses like nitrogen and argon need to be raised to 98 to 99 per cent to be effective because they work by displacing oxygen. This high concentration is nearly impossible to achieve in the field.

The three methods of exposing groups of birds differ in the number of birds done in one exposure, the amount of gas needed and the speed of destruction.

Adding gas to the entire barn (whole barn gassing) requires the most gas. However, it has the benefits of not requiring crews to catch and move live birds, and administering CO2 to all the birds in the flock at once.

This results in a significant improvement in animal welfare, and a reduction in labour costs, as loading bird carcasses is much quicker and easier than catching live birds to remove from the barn.

Placing birds in a modified atmosphere killing (MAK) cart uses far less gas, but requires the birds to be caught and transported to the cart.

What’s more, the number of birds done in one exposure is much less (usually around 50 birds at a time).

Using larger containers such as sea containers meet somewhere in the middle – moderate gas use and can handle more birds per exposure. That said, they still require birds to be caught and transported. What follows is a closer look at each method.

An example of a modified atmosphere killing cart mounted on a tractor bucket.

A sea container with tanks of gas and monitoring equipment.

Whole barn gassing
Whole barn gassing has the distinct advantage of not requiring the birds to be caught. But it has the highest potential for humane injury. Safety must be the first priority of any gassing event, and protocols must be in place to guarantee that no person is exposed to gas. In people exposed to high CO2 concentrations, unconsciousness occurs almost instantaneously and respiratory movement ceases in one minute.2

It is important to make sure that appropriate concentrations can be reached and maintained to ensure that each event is humane and effective. To do this, the barn must be prepared by sealing the fans and doorways so that CO2 cannot escape the barn at any level lower than the highest point at which the birds might be (top cages in a cage barn, or top tier in and aviary).

Then, a large amount of gas must be pumped into the barn in a relatively short period of time. This is done by way of a specially designed manifold that resists freezing.

Once the appropriate amount of time has elapsed and there are no signs of any movement in the barn, fan covers are removed and the CO2 is vented until levels are low enough to ensure that anyone entering the barn will be safe. The birds can then be removed for disposal, compost or other uses.

MAK cart gassing
MAK carts or sea containers are useful for smaller numbers of birds or in certain cases where whole barn gassing is inappropriate.

In MAK carts, the CO2 concentration is maintained between 40 and 60 per cent, which has been shown to be minimally aversive and reliably causes sedation and unconsciousness in hens.

Birds are placed in the cart until the floor is covered in birds. Standard operating procedures have been developed to calculate the number of birds that are appropriate for a container.

Once the birds have been exposed to the gas for long enough time to ensure they are unconscious, another level of birds can be placed on top of the original birds.

This can be repeated until the cart is nearly full of birds. The CO2 concentration is then increased and held to ensure death has occurred. At this time, birds can be unloaded to be disposed of.

Sea container gassing
Sea containers can be used in conjunction with carts to humanely destroy moderate numbers of birds. The process is very similar to whole barn gassing when you consider the sea container to be a small barn that the birds are moved into.

Lower amounts of gas are used and can be delivered without using a manifold.

Concentrations of gas are closely monitored and maintained for an appropriate length of time until birds are killed, at which time the CO2 is vented and the birds can be unloaded and disposed of.

The co-operation between farmers, welfare experts, and poultry boards has resulted in the development of protocols that give farmers options for end of lay depopulation that is humane, approved and safe.

This is another example of how the poultry industry is identifying and solving potential animal welfare issues.

Dr. Mike Petrik is director of technical services at McKinley Hatchery Inc. He received an MSc in animal welfare from the university of Guelph in 2014.