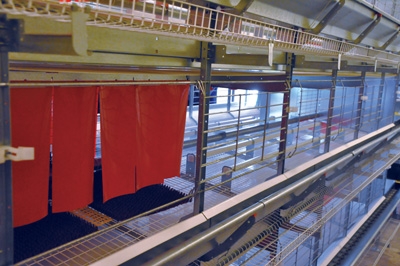 EFC is working to improve its understanding of enriched systems through supporting research and reviewing the code of practice. A national dialogue is needed so producers will be aware of what is happening in the U.S.

Egg Farmers of Canada’s chief operating officer, Neil Newlands, gave a briefing on the potential impact on Canadian egg producers that could result from last year’s agreement between the United Egg Producers (UEP) and the Humane Society of the United States (HSUS) at the Nova Scotia Egg Producers annual meeting.

Newlands observed that the HSUS has already achieved amendments to poultry housing regulations in six U.S. states, and it has targeted more states for ballot initiatives on poultry cages.

The UEP, recognizing the inevitable, met several times in 2011 with the HSUS, finally agreeing to jointly petition the U.S. government to pass poultry housing regulations as part of this year’s U.S. Farm Bill.

U.S. egg producers will have up to 15 years to convert to enriched colony cages under the new Egg Products Inspections Act, which will require minimum cage sizes, 124 square inches for white birds, and 144 square inches for brown birds, said Newlands.

He also stated there will be a labelling requirement for eggs, specifying the production environment: enriched cages, cage-free and free range, as well as new regulations on euthanasia, molting and beak-trimming.

The HSUS has agreed, in exchange, that it will not fund raise or support any further state legislation or
ballot measures against the egg industry, Newlands said.

He remarked that the UEP members support the new egg inspection law “as something they can survive,” observing that 80 per cent of new U.S. poultry housing is now colony cages.

The UEP/HSUS agreement offers a sustainable future for all American egg producers, remarked Newlands; but there is no assumption it will become the standard in Canada, “but sooner or later, what happens in the U.S. affects Canada.”

He wondered if multinational food companies would support different national standards across North America, envisioning a new campaign focusing on Canadian egg farmers. Therefore, the EFC is, “working to improve our understanding of enriched (cage) systems through supporting research and reviewing the code of practice. We need a national dialogue so producers will be aware of what is happening in the U.S.”

Newlands encourages egg producers to discuss the benefits and drawbacks of enriched housing, as well as understanding the risks and options of installing conventional as opposed to enriched, or alternative, housing.

Last year, the EFC set an interim cage density standard, a minimum of 116.25 inches per bird including nest boxes. In the future, Newlands said, minimum sized cages will have to contain perches and nest boxes.

New housing must also have the EFC’s enriched housing certification, as well as meet the animal care program requirement, he said.

Some of the UEP/HSUS agreement requirements “were pretty severe”, he said. Not all U.S. egg producers were happy with this; but they saw no alternative.”

EFC chairman Peter Clarke, when asked about two-tier pricing for early adapters of enriched housing, responded that, although some provinces were already doing it, it is not yet national.

Glen Jennings, Nova Scotia’s EFC director, added the EFC is supporting the Research Chair on Poultry Welfare at the University of Guelph, Dr. Tina Widowski, who will do research on alternative housing and other hen welfare issues.

Jennings also observed the EFC has established an Animal Care and Welfare Advisory Panel of scientists and producers to present recommendations on welfare issues.