By switching to infrared heaters, you could save up to 50 per cent on your fuel costs 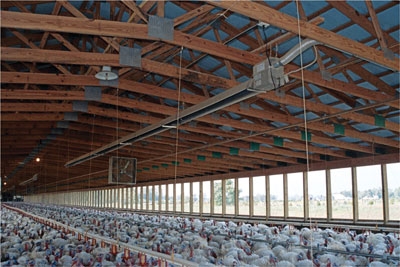 This month is an ideal time to talk about managing the heating of chicken and turkey barns, although we really should have been thinking about our heating systems before the coldest time of the year was almost at hand. Many of you may already have updated your heating systems to the latest technologies, but there are others who are still using older ceramic heaters or forced-air furnaces. This article will explain some newer concepts in order to clarify and explain the ways new heaters can improve production and reduce costs.

We need our heating system to be able to maintain a steady temperature of 90-95 C on the coldest days of the year at the floor level without a lot of variation in buildings where bird brooding will be done. Obviously, we have more flexibility in turkey finisher barns or breeder and egg layer buildings that will only ever have large or adult birds in them, but many of the same concepts will carry over as well.

Radiant Heating Concept
Whatever you do, be sure to get some infrared heaters, and preferably, infrared tube heaters. Instead of trying to heat the air and blow it around the building, radiant heaters work by, directly exposing a metal surface to a flame to reach temperatures of up to 1100 F.  This results in infrared radiation emission, which can pass through air and only releases heat when absorbed by objects or the floor. A reflector is also installed on the top-side of the tube to send all the infrared radiation toward the floor and away from the ceiling. The effect is exactly the same as if the sun were shining into a vehicle, heating up the interior as the energy is absorbed and released as heat and eventually causing the entire vehicle to rise in temperature.

This is a great way to warm a barn because when forced air or other non-radiant methods of heating are used, a large amount of air has to be heated before the floor of the building begins to be heated. Because hot air rises, the hottest air will always be at the ceiling, and, in turn, the coolest air will always fall to the floor.  The end result is that the entire barn needs to be heated before the birds feel any of this heat. Not only that, but the exhaust fans will always be pulling the warmer air out, further exasperating the problem.

How do infrared tube heaters fix this?

Because the heat originates from the floor, with the hottest air at or just above the bird level, set temperatures can be slightly lower as. Additionally, the cool incoming air rolls across the ceiling and descends into the hot air, infusing it with oxygen without causing a measurable temperature drop. Utilizing a tube heater will also generate a uniform floor heat signature, even along the length of the heater. In chicken barns, a straight tube heater is usually adequate with only a slight variation in floor temperatures from end to end of about 10-15 F over 40 feet. In a turkey brooding barn, a U-tube should be used because the temperature variation from end to end of the heater can be further reduced to as little as 1-3 F.

In general, a 30-foot U-tube application is about the longest that should be installed, as the flame length is not long or intense enough to reach the end of a longer tube. But, there are some newer heater styles, such as bidirectional centre-fired units and heaters that use two layer tubes to reduce heat transfer in what would usually be the hottest portion of the tube, and metal baffles to increase heat exposure on the end of the tube that would usually be the coolest.

A steady temperature at bird level isn’t the only benefit, as litter conditions are also improved when using infrared tubes.

Because the litter is the first thing being heated by the floor, the moisture evaporates and subsequently improves the quality of the litter, which makes for better birds.

Another benefit of using infrared tubes over stoves or forced-air heaters is that the oxygen from inside the building is not consumed to produce the flame. Fresh-air intakes are installed, pulling air from the outside of the building or from the attic. The intakes differ from other heaters, which require inside air to be combusted. Thus with the infrared tubes, less ventilation is required to keep oxygen levels high.

Cost savings
Here is where the differences really show: fuel savings. According to the website of Easy Radiant Works, a Canadian infrared heater company: “When conventional forced warm air heaters are replaced with infra-red heaters it is commonplace to achieve fuel savings of 30 per cent – 50 per cent. The New York State Inter-Departmental Fuel and Energy Committee have claimed fuel savings as high as 50 per cent since switching to Radiant Tube Heating. Fuel savings of greater than 50 per cent are not uncommon.”

That’s a pretty convincing argument to make the change, even without the other benefits: Preheating of the barn can be accomplished in a few hours instead of one to two days; bottom-up heating and settings can be reduced by a degree or two. Just sit down and calculate how much you spent over the last couple of years on gas. How quickly could you pay for new heaters and then start profiting from these savings?

Most companies say that payback can be attained in as little as two to three years on an infrared heater, an item that can typically last up to 20 years. Not bad.

Shawn Conley is with Weeden Environments in sales and technical service, internationally and in Canada. He manages projects with many U.S. poultry companies and works frequently with researchers in the industry. Management in pharmaceuticals, a degree in cell and molecular biology and some NCAA and professional basketball preceded his six years working in the poultry equipment and feed-additive industry. Being a former Ontario farm kid, his motivation is to help producers build a strong Canadian poultry industry. He can be reached by e-mail at shawnc@weedenenvironments.com or shawn.d.conley@gmail.com.