Sunnyside Down: Farm Income from Eggs in the U.S.

Farm Income from Eggs in the U.S.

U.S. egg producers have endured low profitability for the last year and a half and could face even tougher times as grain prices rise.

While Canada’s egg sector is seen, and sometimes criticized, as a bastion of stability for producers the U.S. egg industry is anything but. This is particularly true in recent years.

Don Bell, professor emerita at the University of California, Davis and author of the California Poultry Letter wrote recently: “The period of 2001 to 2006 represents one of the most variable in terms of prices and profitability that U.S. egg producers have ever experienced. 2004 had one of the highest annual returns on record, while 2005 was one of the poorest.” 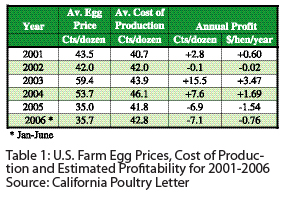 He writes that estimates of profitability for the U.S. as a whole ranged from minus 38 cents/bird/month in June of 2005 to plus 92 cents/bird/month in March of 2004. In the 66 weeks from March 2004 to June 2005 egg production was profitable for 36 weeks and unprofitable for 30 weeks, he writes. During that time frame overall profitability averaged about $0.63 per hen per year or 2.9 cents per dozen.

Meanwhile in the 24-month period beginning in July of 2004 through June of 2006, there were 17 negative income months with an accumulated loss of an estimated $2.70 per hen or more than 12 cents per dozen.

Bell adds that it is increasingly difficult to estimate U.S. farmgate prices.

“In previous years, nest-run eggs were commonly sold to processor/dealers and payment was made to the producer. Farm prices, therefore reflected all eggs produced (sold) at prices relative to the market quote by size and grade. As the industry became more and more integrated (common ownership of production, processing and marketing), payment for the eggs was based upon market quotes at a different level and “farm prices” became more difficult to estimate. Today, the quotation that most firms use includes processing, packaging, transportation, marketing, and ‘discounts’.”

In addition to the variability from year to year farmgate prices vary from state to state to reflect the cost of transporting feed to the farm or the eggs to market as well as other factors.

The following figure produced by Bell and published in the poultry letter graphs prices recorded by the USDA from June 2001 through June 2006. The red line is an estimate of the average national cost of production. It can be seen that profits were a scarce commodity in the period. Profitability was strong beginning in the middle of 2003 and through the first half of 2004, but for most of the five years hovered just above or below the break even level and in recent months have been mostly negative.

The result of the combination of volatile (and frequently low) eggs prices and stable production costs is reflected in estimated profits of U.S. egg producers. After a peak in 2004 came the deep valley of 2005 that is continuing into 2006.

Canadian egg prices at the farmgate are much more stable than in the U.S. as is the profitability of Canadian egg farms.

The following table shows the cost of production and producer prices for a dozen large eggs in Quebec (which has both prices and costs close to a crude median for Canada) from week 1 of 2001 to week 35 of 2006. Much more detailed information is available on the CEMA web site at www.canadaegg.ca.

The table also shows that the price of table eggs rose in Canada (as they had in the U.S.) in 2003 and 2004, but fell back in 2005. In the most recent period for which data is available profitability has been restored while production in the U.S. remains unprofitable.

Also worth noting are the significant differences in U.S. farmgate prices and Canadian producer prices and
the published cost of production figures.