The Nova Scotia wild blueberry industry is growing at a rapid pace, due in part to the berry’s high concentration of antioxidants and other bioactive molecules that are known to help prevent conditions such as heart disease and cancer. 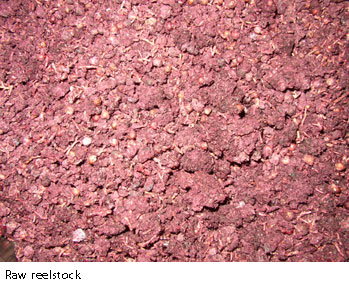 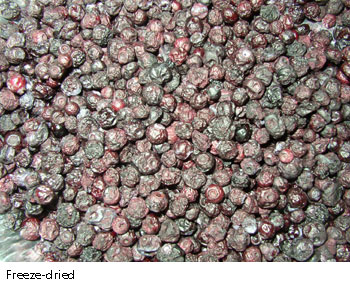 The Nova
Scotia wild blueberry industry is growing at a rapid pace, due in part
to the berry’s high concentration of antioxidants and other bioactive
molecules that are known to help prevent conditions such as heart
disease and cancer.

Broiler chickens are susceptible to heart
disease in the form of sudden death syndrome and ascites and may
benefit from the inclusion of antioxidants in their diet. Myofibrillar
degradation, which is associated with poor breast meat quality, may
also be reduced with the addition of dietary antioxidants. An animal’s
antioxidant defence system includes both enzymatic and non-enzymatic
parts. The non-enzymatic system includes substances often found in
fruits and vegetables, such as ascorbic acid, carotene, flavonoids and
uric acid etc.

Byproducts from the juice manufacturing
industry are known to retain a high level of bioactive compounds and
may be a natural and economical source of non-enzymatic antioxidant
compounds. There currently is no information available on the
suitability of blueberry byproducts for broiler chicken diets. It is
known that feeds high in fibre or non-starch polysaccharides can slow
the growth of broiler chickens, while feed ingredients that are highly
pigmented can alter the appearance of dermal tissues of chickens before
and after processing.

The objective of this project was to
evaluate the effect of feeding blueberry processing waste on broiler
growth and meat quality.

Three
trials were conducted at the Nova Scotia Agricultural College (NSAC) to
determine the digestibility of blueberry byproducts in broiler diets
and their effect on growth and meat quality. For the digestibility
trial, 60 day-old male chicks were housed among 10 battery cages and
fed either a standard starter diet or a starter diet supplemented with
30% freeze-dried blueberry processing waste product (‘reel stock’).

Celite,
an inert digestibility marker, was added to each diet. Excreta samples
were collected at 21 days to determine apparent metabolizable energy
(ME) of the blueberry reel stock. Breast muscle samples were collected
after cervical dislocation at day 21 to determine post-mortem pH
decline.

Two growth trials were conducted, with 912 male broiler
chicks distributed among 24 floor pens and fed one of three isocaloric
dietary treatments containing 0, 1.5 or 3% freeze-dried blueberry
product. Birds were given ad libitum access to feed and water and were
reared under a continuous lighting program. Skin colour of live birds
was measured on the dorsal side of the foot at 14 and 20 days. Breast
muscle samples were collected after commercial processing at day 35 to
determine post-mortem pH decline.

The
freeze-dried blueberry processing waste product did not provide
significant energy to the broilers (digestibility coefficient 0%;
apparent ME 0%) and was therefore evaluated as an antioxidant compound
instead of a nutritional supplement. Broiler growth performance was not
consistent between the two floor pen trials (Table 1).

Birds susceptible to protein damage are typically
identified by pH readings below 5.80 at 15 minutes post-mortem; breast
muscle samples in all three trials were above pH 6.0 regardless of
dietary treatment. Dietary treatment did not have a strong effect on
broiler skin colour, although the shank skin of birds fed the 3%
blueberry product tended to be less red. 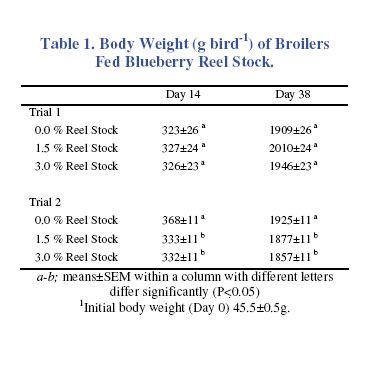 Freeze-dried
blueberry processing waste (blueberry reel stock) does not provide
significant energy to broilers. Feeding blueberry reel stock at 1.5 or
3% may cause a reduction in broiler growth. However, there may be
potential for this product in diets of poultry with lower growth rates
such as laying hens or broiler breeders.

Blueberry reel stock
may affect broiler skin colour; whether this colour change is
undesirable to consumers has not been established. The value of
blueberry reel stock as an antioxidant compound remains unclear.

Despite
rearing the broilers under a continuous lighting program there were
very low levels of mortality in all treatments and the effect of
blueberry reel stock on cardiac health could not be determined.

Similarly,
potential improvements to meat quality could not be measured as there
were no poor quality samples in control or blueberry fed birds. Other
types of blueberry processing waste products, for example those
containing higher levels of antioxidants and lower levels of
indigestible waste, may be of benefit to broiler cardiac health and
meat quality and warrant investigation.

For more information on this project or any other project, please contact apri@nsac.ca or phone 902-893-6657.

Funding for this project was provided by the Nova Scotia Department of Agriculture and Fisheries and Agri Futures Nova Scotia.