British Columbia is taking a stand on cross-border shopping 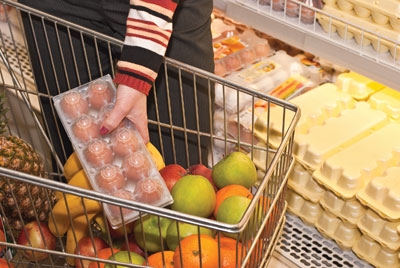 The BC Egg Marketing Board believes that the industry has lost over three million dollars in retail egg sales due to cross-border shopping in the first 10 months of 2012.

“We’re the only province which has seen a year-to-date decline in consumption and we attribute that to cross-border shopping,” says BCEMB general manager Al Sakalauskas.

That is because almost all the decline has come in conventional white eggs, which cost more than a dollar less in Seattle than they do in Vancouver. “It’s about a two per cent erosion of regular table egg sales to the end of September,” he adds.

The decline does not appear to have had an impact on organic or other specialty egg sales, perhaps due to the fact that those consumers are used to paying a little extra or because they already see the value of supporting local farmers.

The BCEMB wants the rest of the Metro Vancouver consumers to appreciate that as well and with this in mind is launching a course in “eggonomics.”

To launch the effort and bring the point across in dramatic fashion, the BCEMB, with the help of its advertising agency, DDB, created a media event in downtown Vancouver in mid-September. BCEMB and DDB staff built a life-size fire truck with 20,000 B.C. egg cartons at downtown Vancouver’s busiest street corner to demonstrate the amount and value of lost sales.

“The event did what we wanted it to – it got some attention, a lot of social media and very favourable responses from small business and consumers,” Sakalauskas says, noting a YouTube video of the event has had close to 700,000 hits.

They backed up the video with a new website, www.eggonomics.ca, which describes how bringing in U.S. eggs, a few dozen at a time, takes money out of the pockets of Canadian farmers, graders and retailers, thereby negatively impacting the entire local economy.

Since egg production is governed by quota, the decline has not had a direct effect on B.C. egg producers. Despite that, the BCEMB is footing the entire bill for the campaign.

“We can’t just sit back and ignore the erosion when every other province is experiencing an increase in sales,” Sakalauskas says.

Although cross-border shopping occurs across the country, it is most pronounced in Vancouver and the Fraser Valley, which has about three million people living within an hour of the U.S. border. Incidences of this have shot up after local border crossings were vastly improved and the Canadian Border Services Agency doubled the value of products consumers are allowed to bring back to Canada.

The shopping is not restricted to eggs. Consumers usually cross the border for bigger-ticket items, as well as such staples as eggs, milk and cheese.

Because of that, the BCEMB is now working with the BC Dairy Association and the Retail Council of Canada to develop an aggressive campaign to combat the issue. To help finance the effort, they are hoping to access $100,000 in matching funding from a $2-million dollar fund the provincial government recently gave agriculture to promote buying local.