Poultry Barn Research: When to clear the air 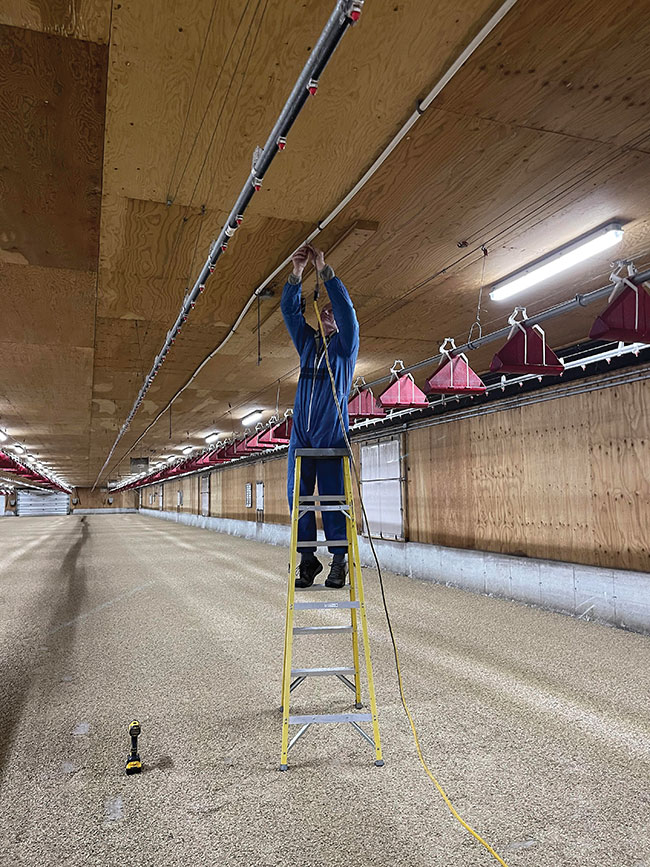 For egg and poultry meat farmers, achieving optimal air quality inside the barn may mean a trade-off with profitability. That’s because the easiest solution to managing the two major threats to clean air in a poultry barn – ammonia and particulate matter – are best controlled with ventilation, a costly solution in Canadian winters.

Ammonia management techniques
“Ammonia is a tough one to manage because it’s formed when poultry excreta with high concentrations of nitrogen reacts with with microbes under moist conditions,” says Van Heyst. “In barns where the birds are present for longer periods of time – especially broiler breeders and layers – it’s important to keep ammonia at an acceptable level.”

Canadian animal care requirements related to poultry require ammonia levels below 25 parts per million (ppm). In a recent project, as part of his CPRC cluster work, Van Heyst used his advanced monitoring equipment to test ammonia readings in a broiler breeder barn that had incorporated a seemingly novel solution: an alley scraper under the roosting area.

“Broiler breeder facilities typically don’t have a way to remove excreta more frequently, and the thought was that with this solution there would be less volume and less ammonia overall, but that wasn’t necessarily the case,” says Van Heyst.

During his team’s measurement campaign, Van Heyst says the agitation of the chains caused the surface to break up and emit ammonia, requiring quick action from the producer to get it under control. In the coming months, his team will conduct a similar measurement campaign in a broiler breeder barn that does not use an alley scraper, to see how ammonia levels compare.

In an upcoming project, he will measure particulate matter to compare two types of bedding in identical broiler barns, using birds from the same hatchery placed on the same day. One barn will use a traditional bedding type such as chopped or pelleted straw, and the other barn will use peat moss – a material that is gaining popularity among chicken farmers for its ease of use and low cost.

“Particulate matter isn’t always easy to see, and the most harmful type is not visible to the naked eye,” says Van Heyst.

As part of this project, his team will partner with the Animal Health Lab, which will perform lung biopsies on birds from both environments. Specifically, they will look for the presence of fibres in lungs from both straw and peat moss bedding types.

How to manage costs
“As a general rule, if you can see a lot of dust in the air, you have higher levels of all kinds of particulate matter – including the harmful kind,” says Van Heyst.

He says handheld analyzers that measure ammonia levels may be worth the investment, especially if a producer has multiple sites to walk through. If ammonia is high, most people will feel a stinging in their eyes, but it’s possible to build up a tolerance over time. Van Heyst notes handheld instruments don’t always provide accurate readings, but they will provide a reliable indication of whether ammonia levels are acceptable or too high.

“Once you know you have an air quality problem, you really need to increase ventilation and flush it out the barn,” says Van Heyst. “But heating the replacement air with propane or natural gas, if you’re lucky enough to be on a natural gas line, is costly.”

Climate change considerations
Looking ahead, Van Heyst expects emerging challenges from climate change will lead to better barn design. Currently he is working with a graduate student to model airflow in barns and identify stagnation zones. With that information, he says it’s possible to design better poultry barns for ventilation and heating in winter.

“I think in the coming years we’ll move toward making barns a better energy system, with the ability to pre-heat or pre-cool, so we’re better prepared for climate change, climate adaption and weather perturbations,” says Van Heyst. “There’s always another project on the way, as we test new strategies to make eggs and poultry meat as sustainable as possible.”

This research was funded by the Canadian Poultry Research Council as part of the Poultry Science Cluster, which is supported by Agriculture and Agri-Food Canada (AAFC) as part of the Canadian Agricultural Partnership (CAP) program. Additional support was received from Egg Farmers of Canada, Canadian Hatching Egg Producers, Ontario Ministry of Agriculture, Food, and Rural Affairs, and the School of Engineering, University of Guelph.