Turkey Barns: A look inside 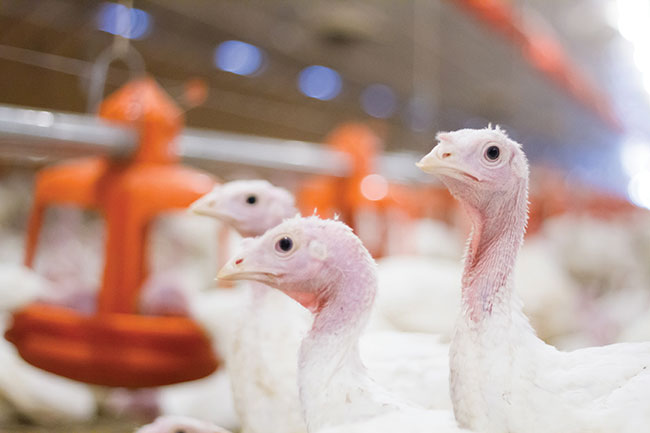 University of Guelph researchers partnering with Hybrid Turkeys on a genomics project launched the study to learn more about the industry and its challenges to help guide their work. PHOTO CREDIT: Big Dutchman.

Surprisingly, there is little scientific knowledge about how farmers house and manage turkey flocks in Canada. A better understanding of on-farm production practices can help producers maintain and even improve bird health and welfare.

Now, thanks to a groundbreaking, multi-year genomics project designed to boost the productivity of Canada’s turkey flocks, researchers have gathered some of that important data.

Hybrid Turkeys partnered with the University of Guelph to adapt technology already used in laying hens and pigs by its parent company Hendrix Genetics to bring genomics-based breeding to turkeys.

Dr. Christine Baes, a professor in the University of Guelph Department of Animal Biosciences and Canada Research Chair in Livestock Genomics, was the academic lead on the five-year project, with Dr. Ben Wood, formerly a geneticist with Hybrid Turkeys and now an associate professor in the School of Veterinary Science at the University of Queensland in Australia, serving as the industry lead.

There were three main areas of research: Production; meat quality; and health and welfare.

Researchers Dr. Nienke van Staaveren and Ph.D. student Emily Leishman are part of the team working on the health and welfare component of the project and wanted to learn more about the industry and its challenges to help guide their work.

“We didn’t know what the big issues were and where we should go with the research for the health and welfare pillar of the umbrella project,” Leishman explains.

“The turkey sector is not as well known as other poultry; a lot of research comes from boilers that is adapted to turkeys,” van Staaveren adds. “If you want to make changes or improvements, you first have to learn what you are starting with.”

Farmers also had a chance to offer their perspectives on bird health and welfare, what they feel is important and what they consider to be leading issues in the industry.

Turkey Farmers of Canada distributed the two-part survey to its approximately 500 members across Canada, and farmers had six months to reply between April and December 2019. In addition to a detailed questionnaire, producers were also asked to complete some basic health scoring of a current flock of birds for conditions like footpad dermatitis and injuries on the head and back due to pecking behaviour.

About 20 percent of survey recipients responded, according to Leishman, with good representation from all turkey-producing provinces across the country.

Key findings
According to the study, most farmers are male, 45 years of age or older and have been in the turkey industry for more than 10 years.

Canadian flocks live indoors, the majority on farms with one to three barns with flock sizes ranging from 3,000 to 11,000 birds. Practices related to feed and water management and environmental control were relatively consistent between turkey farms.

Despite that, it’s hard to paint a picture of a “typical” Canadian turkey farm due to differences such as climate or classes of birds produced.

For example, although barns are ventilated, how they are ventilated varies. Approximately 35 percent of respondents have open-sided barns with curtains; the rest have enclosed barns that rely on automated or power-controlled ventilation.

“We asked a lot of questions about litter management and we see a consistent trend that wet litter seems to be an issue that producers are cognizant of,” Leishman says. “They know that wet litter can affect birds negatively and that environmental control can affect productivity.”

The researchers observed more variatian regarding flock health management and biosecurity practices, with producers reporting using a range of different methods. Vermin control, changing or washing boots and inspecting flocks from youngest to oldest were among the most common biosecurity protocols.

Farmers that responded to the survey are part of different certification programs. A significant number participates in raised without antibiotics or responsible antibiotic use programs, Leishman notes. Regardless of the certification program, virtually all farmers indicated having a good working relationship with their veterinarian.

See the sidebar for more key facts and figures from the survey. 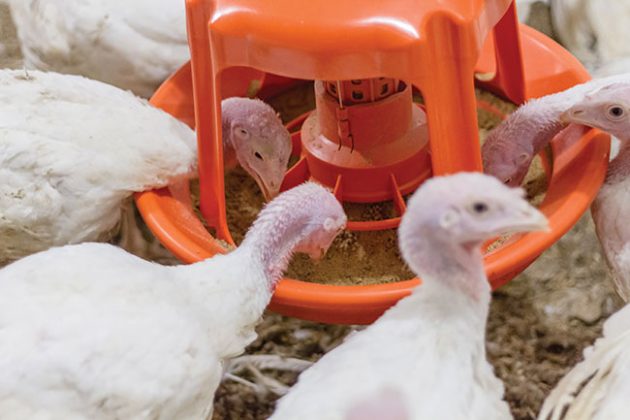 What went unanswered
Another interesting finding was the types of questions farmers didn’t or couldn’t answer. For example, two of those topics were the relative humidity level in the barn or how many birds are deliberately culled versus those that die of specific causes or conditions.

“Some farmers don’t record those stats separately, so if you have a problem with birds dying, it can be hard to tease apart specific risk factors,” Leishman says, adding that’s why good record-keeping is a vital part of overall farm productivity and profitability.

“It’s hard to consider improvements when you don’t know where the problem lies. Good record-keeping can be an excellent benchmarking tool to help with this.”

Next steps
The research team is now working to create linkages between housing and management practices to the prevalence of certain conditions, like footpad dermatitis or pecking injuries. They hope that work will lead to beneficial outcomes and impacts for Canada’s turkey industry.

“Feedback, such as the results of this study, enables breeders to evaluate current challenges in the industry to determine if a change should be made in a breeding program to adapt to new environments, or if management or environmental adjustments can offer a greater impact,” says Owen Willems, R&D rirector at Hybrid Turkeys.

“The results highlight the importance of customer feedback to fuel the genetic engine of a primary breeder. In doing so, this helps to ensure the available pool of genetics meets the needs of the market today and into the future,” he adds.

Hybrid Turkeys has already started using genomic information to accelerate its breeding process. According to Willems, it improves the accuracy of genetic information obtained through the DNA of its birds by linking together DNA and phenotypic performance.

Turkey housing and management in Canada at a glance
The following are key facts and figures from the research team’s report, Housing and Management of Turkey Flocks in Canada.