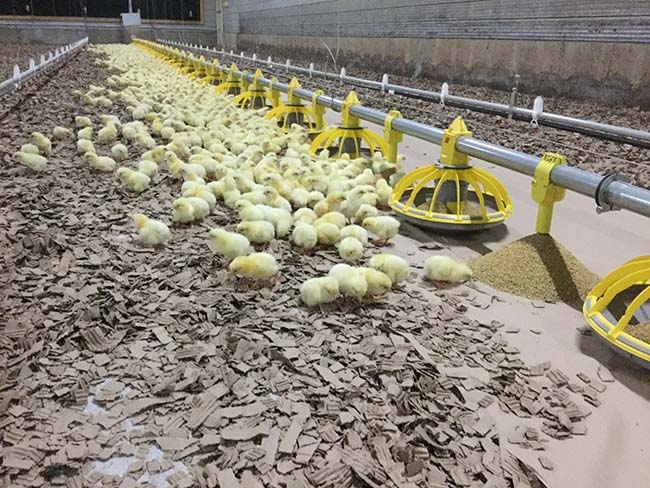 Bedding is being examined as an increasingly important factor in poultry health, and can affect a producer’s bottom line through how much labour is involved in spreading it and how well it cleans up.

Jillian Jasper, self-proclaimed “head of the herd” at ABC (Animal Bedding Company) in Woodstock Ont., is a firm believer that producers should be taking a much closer look at their bedding choices. “We are told over and over by producers of poultry and every other livestock species that outside of a vet making bedding suggestions in times of health crises, [that they] are never approached to talk bedding,” she notes. “We believe that our products outperform straw, shavings, drywall, peat moss, sand and everything else on the market in terms of animal health and positive environmental inputs. When cull rates with our poultry clients consistently come back with zeroes for respiratory and zeroes for pad/leg health issues, it confirms our complete belief in what we offer.”

ABC provides bedding for poultry, cattle, horses, sheep, pigs and exotic animals. It was founded in 2013. Ray Batchelor, a retired Chrysler engineer, got all of the equipment and manufacturing processes up and running. Jeffrey Moore, a chartered professional accountant, runs the overall organization. Jasper takes the lead with sales, marketing and education, using skills gained earlier in her career in animal health pharmaceuticals. She says that during her years of representing other products, she was always searching for her own proprietary product to bring to market. About 15 years ago while showing her horses in Ohio, she came across bedding that appeared to be made from chopped-up cereal boxes. It never left her mind. “After years of research into adhesives, dyes, components of cardboard, other materials, packaging, and so on, I developed a cardboard product that seems simple,” she says, “but it is brought to its greatest potential through addressing the growing consciousness in the ag sector of better animal husbandry and environmental stewardship.”

HOOF-PRINT is one of the company’s five products. It manufactured by chopping up virgin corrugated cardboard, extracting the dust and compressing the product into 35-pound bales. It is free of salmonella, toxins, labels, tapes or inks, with what Jasper calls “an overwhelming absorption capacity.” After use, it turns into black, composted material in six to nine weeks.

TRACK-PRINT is a mineral bedding which is widely used in all species. It balances pH, absorbs moisture, is non-caustic, acts as a natural insecticide and reduces ammonia. It works similarly to diatomaceous earth, killing insects by scraping at their shells when they crawl through it but Jasper says it is better because it does not lose stability when exposed to moisture.  She says it is very effective for darkling beetle control in poultry barns.

Bedding for each species required its own dedicated focus. “Eighty per cent of our market is poultry,” Jasper notes. “Initially, it was twenty per cent, but this changed rapidly as we educated and gained exposure in the poultry segment. Our products are very conducive to the biosecurity and general sensitivity of the poultry segment.” ABC distributes across Canada, and will currently ship to the U.S. if Canadian customers have operations there. “Holland is a big potential market for us,” Jasper adds. “We have both a dairy and poultry contingent in Holland…they are very innovative. They love our stuff. And all of those Holland connections come through our existing users.”

Trials
Both HOOF-PRINT and TRACK-PRINT are being trialed at many operations in southern Ontario.

Hybrid Turkeys recently trialed HOOF-PRINT as part of its continuous overall company focus on innovation and improvement, especially in this case, the potentially improved environmental conditions due to the ‘dust free’ nature of this bedding. The trial lasted 15 weeks (from 5 weeks to 20 weeks of age) and the following were evaluated: curability, absorption, ammonia levels, dust levels and overall acceptability/comfort of the birds. Overall, Hybrid Turkeys is pleased with the results of the trial but feels further testing is required at different ages and at different stages of production (e.g. rearing phase and lay/production phase). The company also wishes to find out more about the biosecurity processes for the manufacturing of this type of bedding.

University of Guelph doctoral candidate (pathobiology) Ryan Snyder is currently studying the effect of bedding and other factors on coccidiosis survival at several area farms. He will have results in years to come.

Peter Greydanus who raises broiler breeders for Maple Leaf at Greyda Plains Poultry in Petrolia has used TRACK-PRINT since last October. “It’s controlling the flies and it’s a bit cheaper and less dusty than diatomaceous earth,” he says. “I like it. I think Jillian’s on the right track with it, it’s non-chemical. You have to re-apply after manure builds up and I’m curious to see how it works on darkling beetles.”

Greydanus has used HOOF-PRINT bedding in one pullet cycle so far. “I used it combined with straw and it was a rough cycle for coccidiosis because it was too dry,” he says. “Whether it was the product or my management, you’d have to add moisture I think. There’s a lot less dust with it than straw or shavings. I think it would be the same cost as shavings and fewer bags to handle.”

In October however, Greydanus was very happy with the performance of HOOF-PRINT in a breeder barn cycle. He plans to definitely use it in the breeder barn going forward instead of straw, at least for winter flocks because it dries “very nicely.”