A portrait of alternative egg production in Canada

Research study provides a Canadian snapshot of husbandry and management practices in enriched and cage-free housing. 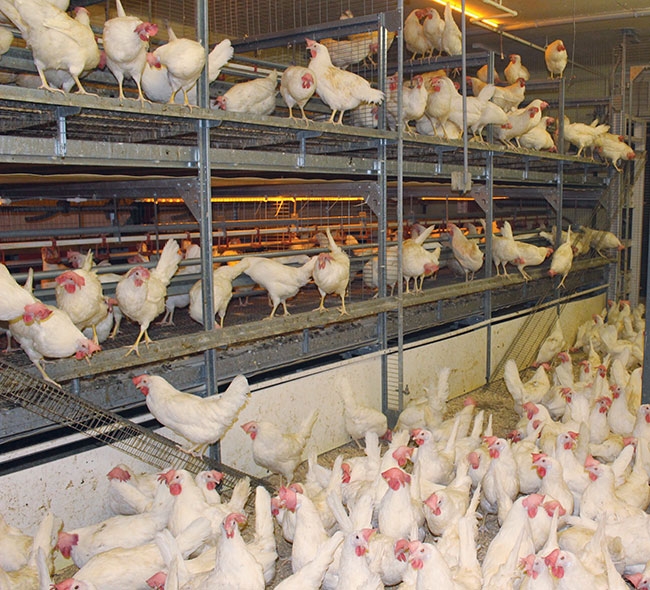 Egg farmers described their housing, management and flock characteristics for a University of Guelph study.

The laying hen industry in Canada is at the beginning of a 20-year transition. Following the lead of worldwide efforts to improve laying hen welfare, in February 2016 the Egg Farmers of Canada (EFC) announced that a move away from conventional egg production to alternative production methods would begin.

With this transition still in its early phases, a new study recently completed by researchers at the University of Guelph has provided a snapshot of current laying hen husbandry practices in Canada.

In October 2017, 122 Canadian commercial laying hen farmers with furnished or cage-free systems were invited through their provincial egg boards to participate in a questionnaire. In this voluntary study farmers were asked to describe their housing, management and flock characteristics. Sixty-four questionnaires were returned, providing data on 65 flocks, representing 26 furnished cage, 17 single-tier and 22 multi-tier systems with representatives from all major egg production provinces.

At the time of this study, approximately 11 per cent of Canadian layer farms had furnished cages and 17 per cent supplied non-cage housing systems on their farms, sometimes in conjunction with conventional systems. The data, therefore, represents approximately 22 per cent of the furnished and non-cage farms in Canada at that time, housing approximately 935,000 laying hens.

Egg farmers described their housing, management and flock characteristics for a University of Guelph study.

Housing and enrichment
Most furnished cage farms had 10,000 to 15,000 hens, housed in two-tier (36 per cent), three-tier (50 per cent) or more than three tiers (14 per cent), while farms with non-cage systems were typically larger with more than 25,000 hens. Seven of the farms were organic certified with multi-tier housing; two farms were furnished or single-tier operations with less than 1,000 hens.

As a reflection of the fast changes happening in the egg production sector, 10 farmers had only been working with their system for less than a year, while 26 systems were one to four years old, 17 were between five and ten years old and six were more than 10 years old.

Outdoor access was provided for one single-tier flock and seven multi-tier flocks, with the majority of farmers providing artificial or natural shelters in the outdoor area. Birds were given access to the outdoors at an average age of 28 weeks, ranging from 24-to-30 weeks of age. Farmers reported a wide variation on the amount of outdoor range actually used and the percentage of the birds using the range.

Perches were provided in the majority of flocks. In most cases (82 per cent), farmers reported that all birds were able to perch at the same time, although actual perch space allowance was not recorded in this study.

Providing some sort of enrichment seemed to be part of standard farming practice in non-cage systems, with exposure at an average age of 25 weeks. Hanging objects such as bottles, ropes or string were used in eight percent of non-cage systems, as well as bales of hay or straw (18 per cent) or mineral blocks and pecking stones (16 per cent).

Litter and lighting
All multi-tier systems provided a litter substrate such as wood shavings (43 per cent) or sawdust (21 per cent). In 25 per cent of barns, manure was considered a litter substrate and in two-thirds of the flocks, litter was not replaced or raked to break up the surface.

Not all facilities complied with the requirements for space allowance and scratch areas as set out in the 2017 National Farm Animal Care Council Code of Practice for the Care and Handling of Pullets and Laying Hens, having been installed prior to the new code coming into effect. Similarly, over 20 per cent of non-cage systems provided a fully slatted barn and no litter, a practice no longer allowed under the code of practice.

A dusk to dawn period was typically created on 83 per cent of farms by the gradual dimming of lights in different areas in multi-tier systems or by automatic dimming in furnished and single-tier systems. Birds received 15 hours of light per day, on average.

The flock
Commonly used breeds were represented through the 65 flocks in this study. In furnished cages, the majority of birds were white-feathered while brown-feathered birds were more common in non-cage systems.

Consumers generally perceive that brown-shelled eggs have a higher nutritional value and are more ‘natural’, says primary researcher Dr. Nienke van Staaveren, which may explain their prevalence in non-cage systems.

Flocks were 45 weeks old, on average, but ages ranged from 19 to 69 weeks. Birds were generally placed to lay between 14 and 20 weeks of age. In single- or multi-tiered systems they were usually home-reared; for furnished cages, the birds typically came from conventional cage pullet systems. Rearing systems simulated eventual housing conditions for 52 flocks in terms of housing, perches, feed and environment.

Flock health
Most farmers (55 per cent) inspected their flocks one to two times per day, checking bird health (100 per cent), behaviour (83 per cent), equipment (97 per cent) and litter quality (65 per cent).

At an average of 2.1 per cent, cumulative mortality appeared highest in multi-tier systems, while single-tier and furnished cages compared at 1.6 and 1.1 per cent, respectively.

Farmers reported that the most frequent cause of mortality was birds getting trapped in housing equipment (19 per cent), followed by disease (17 per cent), leg injuries (15 per cent) and cannibalism (14 per cent).

While disease issues were not commonly reported, less than one-third of farmers (29 per cent) had a flock health program in place with their veterinarian.

This voluntary study sample data represents a wide range of farm sizes and locations across Canada. “This information can be used to better understand practices in these housing systems to increase farmer awareness of expected changes during the transition phase of the Canadian egg production sector,” van Staaveren says.


Canadian Feather-pecking Management Plan
According to lead researcher Dr. Alexandra Harlander, this description of non-conventional housing systems in Canada is part of a larger project funded by the Egg Farmers of Canada to develop a Canadian Feather-pecking Management Plan (CFMP) based on Canadian-tailored risk factors to prevent, reduce or stop feather pecking and poor plumage condition in hen flocks.

Through further analysis, Harlander and her research team will be identifying risk factors for feather pecking in Canadian laying hen flocks where hens were housed in enriched and non-cage housing systems. “With the feedback and information from the farmers combined with results from on-farm feather damage assessments for which we developed an illustrated guide, we will be able to develop the CFMP. This will help them choose between several courses of action to prevent, reduce or delay poor feather cover in laying hens.”