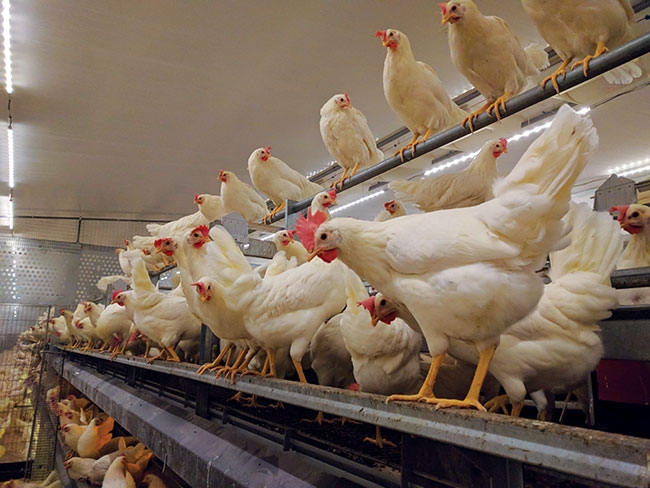 While the vast majority of Canadian egg producers still use conventional housing, some have had enriched colony or free-run housing systems in place for several years. These farmers have, therefore, had the time to get to know these systems and learn how to best manage flocks within them.

Canadian Poultry checked in with three such producers, one free-run, one enriched colony and one that uses both, to hear their lessons learned and best management tips.

To maximize the performance of hens in terms of the housing itself, Houle says the most important thing in aviaries is to keep manure levels low on the floor. “You don’t want them laying eggs on the floor, and the hens will do that if the manure gets too thick,” he observes. “You want to keep manure at two inches at most. In the new barn, I have an automatic manure removal system and in the older barn I remove manure about once a week using a shovel and wheel barrow.”

Houle raises and trains his own pullets to navigate aviary housing so that they are well prepared at 19 weeks of age to do well in the layer barn. “It’s important for success to have well-trained pullets,” he says. “With my pullets, at five weeks we start opening their cages and it takes two to five weeks to get them used to the aviary pullet training system; to get used to going up into the system and sleeping on the perches, eating and drinking and so on. Then once they are in the layer barn, they will perch in there at night and lay their eggs up there in the morning before they come down to the floor.”

In terms of feeding, Houle notes that consumption is higher in an aviary system because the birds expend more energy in moving around more. “We had to reduce the salt content in the feed,” he adds, “as you have a dryer manure if the salt content is lower. We had the feed tested every year and adjusted it down a bit each time. Some companies also add feed additives to feed to keep the manure dryer.”

Houle uses a dimmer to slowly decrease the light level over about 90 minutes every evening, giving the birds adequate time to go up inside and perch.

Light is increased in the morning over about 30 minutes. However, he cautions that watching every new flock to make sure the timing is right is a must.

He also monitors daytime light levels with every new flock to make sure they are low enough to prevent pecking. “You have to watch your flock and adjust, and you have to be more attentive to your flock in general with an aviary,” Houle says. “If you watch the birds every day, you will notice any small problems with pecking or other problems, and deal with them before they become large problems.”

Houle’s barns have a large air exchanger that keeps the humidity levels low and no other source of heat is required. He says that while the dust levels are higher than in a conventional cage barn, the temperature and ventilation control is similar and works well.

With regard to bird health, Houle says management practices in aviaries are similar to those used in conventional cage systems. But the producer adds that the birds in an aviary system are definitely healthier. “They grow more feathers,” he says, “and look great.”

Enriched colony lessons learned
Tonya Haverkamp operates her family’s layer farm near Listowel, Ont., where enriched cage housing was installed in one barn in 2017. The family has 41,000 hens in enriched and the remainder in conventional cages. They also raise pullets on the farm.

Haverkamp notes that cleaning and maintenance in the enriched system is similar to conventional cages, as is ventilation and water systems. In terms of light, the sunrise and sunset dimming patterns are also similar.

“However, our daytime lighting in the enriched barn is lower than conventional, about 60 per cent of maximum versus about 80 per cent,” she says. “We noticed there were pecking issues at the start of the flock and lowering the lights eliminated it.”

While she was a bit nervous that the hens would lay eggs in the nesting boxes, Haverkamp says they took to it right away. “Overall, about 95 per cent of eggs are laid in the nesting boxes,” she notes. “We had to adjust the belt advancement so that the eggs don’t pile up too much. We advance it at 6:30 am, 10:00 am and 3:30 pm.”

Feed consumption is a bit higher in enriched over conventional because the hens are more active, she observes, and the farm’s feed company upped the calcium for pullets going into the enriched system to ensure their bones would be stronger.

Haverkamp says their next flock will get cocci vaccinations because the hens in the first flock ingested manure from their scratch pads and got ill. She cleans the manure belts twice a week.

“Enriched cage production is pretty foolproof really,” Haverkamp concludes. “If you’ve raised in conventional cages, this will be no problem.”