A look how some larger companies have fared in phasing out conventional systems. 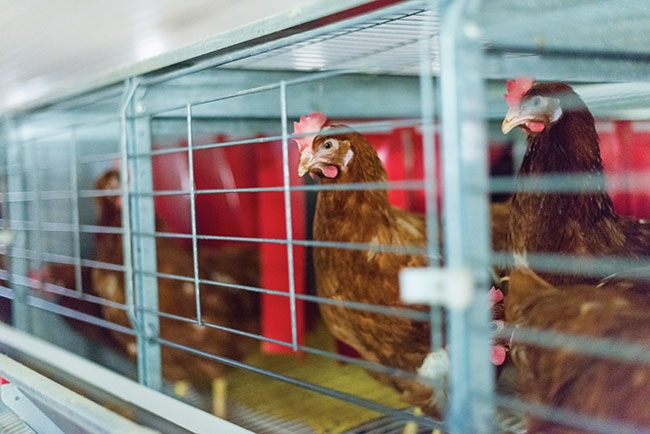 Alternative housing options for poultry abound and there are likely more to come as the search for the best housing solutions continues and the Canadian industry inches ever-closer to drawing the curtain on conventional cages.

Burnbrae Farms has been working with free-run housing since its first single-tier free-run barns came into production in 1998. Today, two of those barns have been converted to aviary-style free-run housing – and in 2012, the company built the first enriched housing barn in Ontario.

In a free-run barn, hens can roam freely inside and lay their eggs in nesting boxes, whereas an enriched barn still houses birds in smaller groups, but provides nest boxes, scratch pads and perches.

“The trend is that as conventional cages need replacing, the switch is being made to enriched and free-run, but housing is still evolving,” says Craig Hunter, adding that Burnbrae has already been upgrading its first enriched housing facilities as the early ones did not meet the standards ultimately set out in the revised Code of Practice for the Care and Handling of Pullets and Laying Hens.

New Life Mills also has a long history with alternative housing system, starting cage-free production about 15 years ago, moving into aviary production about four years ago and most recently adding enriched housing.

“The public seems to be demanding change and consumer choice is important,” says New Life’s Bill Revington. “If there is demand, we want to be part of meeting that demand.”

The alternative housing options certainly meet that consumer expectation of more freedom for birds. But the new systems come with their own sets of challenges, some of which conventional housing was originally designed to eliminate.

“The reason we got birds off the ground in the 1960s was so they didn’t recycle their manure – and we ended up with healthier birds, cleaner eggs and much better bird performance,” Hunter says.

In free-run and aviary barns in particular, it is harder to check on birds as they are free to roam inside the building. This also presents more challenges when it comes to catching, and Burnbrae estimates its labour needs are two to three times higher in those barns.

Those facilities are also dustier and with the birds being able to access their own manure, there is a higher risk of E.coli, necrotic enteritis and coccidiosis.

Both Revington and Hunter credit the industry for working hard to address emerging issues, though, from bringing new vaccines to market for E.coli and coccidiosis to breeding birds that are better able to adapt to the new housing environments, such as the more complicated social hierarchy that comes from living in a large group.

Small social groups in conventional housing led to less feather-pecking and less aggressive behaviour, but in larger groups, competition and the pecking order structure is more complex, which means producers have had to re-learn how to manage birds in the new style barns.

They’ve also learned that birds going into aviary-style housing perform much better if they are reared in an aviary-style pullet house as well, as they learn to climb ladders and fly to perches on different levels at an early age. More exercise as a young bird leads to stronger bones to help them adapt better to the multi-tier environment, Hunter says.

Lighting management is also different than with a conventional cage system. According to Revington, New Life learned to stage their lighting so different sections of the aviary would come on at different times for different lengths of time to cue the birds’ behaviours.

Overall, though, birds in enriched environments are generally performing quite similarly to conventionally housed flocks, but there is a slightly greater chance of disease and mortality in the free-run and aviary systems, and egg production is not quite as high.

“Each offers its advantages and comes with its costs. If the consumer is prepared to recognize the additional cost, there’s no reason why we can’t continue with these systems,” Revington says. “It will be interesting to see where the retail preferences go in the long term.”