Restaurant chain partnering with Beyond Meat on plant-based option. 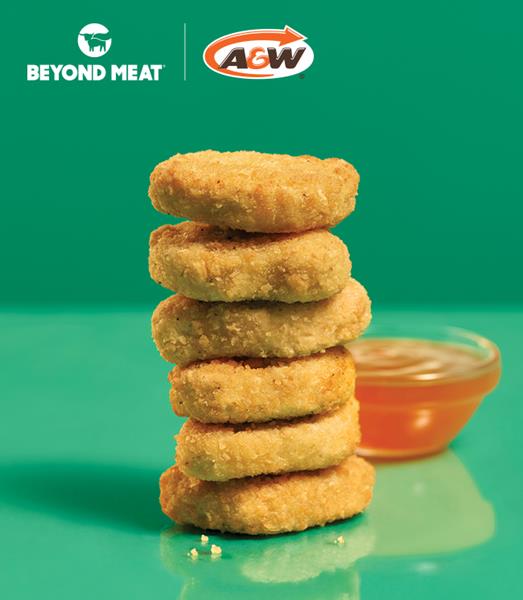 A&W Canada's Beyond Meat Nuggets are made from plant-based ingredients with no GMOs, antibiotics, hormones, or cholesterol.

Beyond Meat, a plant-based protein company, recently announced it is partnering with A&W Canada to introduce Beyond Meat Nuggets.

The launch taps into the growing consumer demand for chicken from quick-service restaurants as well as an increased demand for plant-based proteins.

The nuggets are intended to look and taste like chicken but are made from plant-based ingredients with no GMOs, antibiotics, hormones or cholesterol.

Beyond Meat and A&W Canada first partnered in 2018 to introduce the Beyond Meat Burger to Canadian consumers.

“Beyond Meat Nuggets couldn’t come at a more perfect time,” says Deanna Jurgens, chief growth officer with Beyond Meat. “We’ve doubled down on plant-based chicken this summer, just as consumer demand for chicken is skyrocketing. Following the success of our partnership on the Beyond Burger, we’re proud to be working with A&W Canada to debut Beyond Meat Nuggets in Canada.”

“Many Canadians are looking for plant-based options, but they don’t want to compromise on taste,” adds Tom Newitt, VP of marketing at A&W Canada. “We have been on a search for the best, most delicious plant-based nugget and are excited for our guests to try our new Beyond Meat Nuggets. We think nugget lovers will be very impressed!”

Starting August 9, consumers can find Beyond Meat Nuggets in all A&W Canada locations nationwide for a limited time, while supplies last.

The Nuggets will be available as a six- or 10-piece order, as well as an option for the A&W Kids’ Pack.