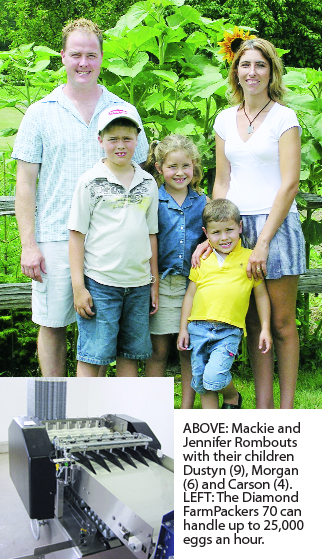 Since installing a new cage system, Mackie Rombouts says he finds it  “much nicer to work in his barn.”

Operating Cortrudy Farms Ltd., near Watford, Ontario, Rombouts recently upgraded his layer barn this past summer, and has since noticed a marked improvement with the air quality inside the barn.

Rombouts is a second-generation farmer, returning to the farm full-time in 1996 with his wife Jennifer after working off-farm as a mechanic.  They worked for his father until 2000, at which time they took ownership.

“I needed to upgrade the cages, they were just too old,” says Rombouts.  “It was also getting really hard to keep the heat and air quality up in the barn.”

Easier breathing and a less pungent aroma was one of several reasons Rombouts chose to install a new cage system by Chore-Time, known as the Modular Manure Belt Cage System.  He is the first in Ontario to install the system, which offers drier manure and easier manure handling.  Several of the systems have been installed on operations in Manitoba, British Columbia and Alberta.

One such design component is the feeders, says Williamson.  Rombouts had Chore-Time’s UltraFlo feeders installed, which feature a uniform feed distribution system and efficiently distribute feed using an auger at 80 feet/minute.  The auger helps prevent the birds from raking and wasting feed, and it can be programmed to stir the feed at intervals to stimulate the birds’ appetites and prevent them from eating only from the top, says Williamson.  This remixing of the feed also helps prevent wastage.

Rombouts needed to install only one motor to drive the new feeders, as he was able to use two existing motors from his previous system, says Williamson.  Another big advantage for Rombouts is that the new feeders work easily with his existing on-farm feed mill, holder and screen.

Four rows of cages three tiers high were installed, giving Rombouts the capacity to increase his current holding of 27,000 birds to 38,000, should he decide to expand in future.  The rows are 80 inches apart, allowing easy access for wheeling bird carts through and easy access to cages, says Williamson.

Rombouts is placing seven birds in each cage, providing 76 square inches of space per bird.  The cages feature Chore-Time’s red door latch that offers one-handed operation from the aisle, as well as a positive lock system, so that if birds place pressure on the latch from the inside, the lock tightens, says Williamson.

The cages do not have side or back partitions, making them more open and able to make better use of cross-ventilation from the fans, he says. This feature also makes for easier cleaning, since there are no barriers and drying is quick.  (See box for more cage information).

For egg sorting and packing, Rombouts had a Diamond FarmPacker 70 from Diamond Systems installed.  This packer can handle up to 25,000 eggs an hour, minimizing time required for this chore.

Each row of cages has its own set of plastic egg-handling baskets and belt, which is not set on a timer, lending itself best to automatic egg collection, says Williamson.  “The packers don’t have to wait, making this system very efficient,” he says.

Each tier has an individual counter so that production can be determined on each level, providing a simple yet accurate method for counting, he says.  The baskets and belts run on separate motors, giving producers the option of speeding up or slowing down, says Williamson.  “Having two separate motors allows the operator to move a lot of eggs at one time.”

Each belt has a slack belt switch that automatically maintains proper egg belt tension and prevents system failure.  The cages on the lower tier have a step-rail bumper guard for easy access to top tiers and moving carts and other equipment without risk of hitting the lower cages, says Williamson.

The most unique feature of the Modular Manure Belt System is the manure handling.  Each tier of cages has its own manure belt underneath, which is operated by its own motor, and can be operated independently of the others.  The manure belts are self-cleaning, utilizing plastic belt scrapers that prevent cutting or damage.

Uneaten feed can also be cleaned out to the manure belts, says Williamson.  The drive rollers are rubber-coated and are coupled with steel pressure rollers, which allows operation of the belts up to 520 feet without fear of problems, he says.

Rombouts has been using the system since late July and is happy with the results.  “It is working out as good or better than I had hoped,” he says.