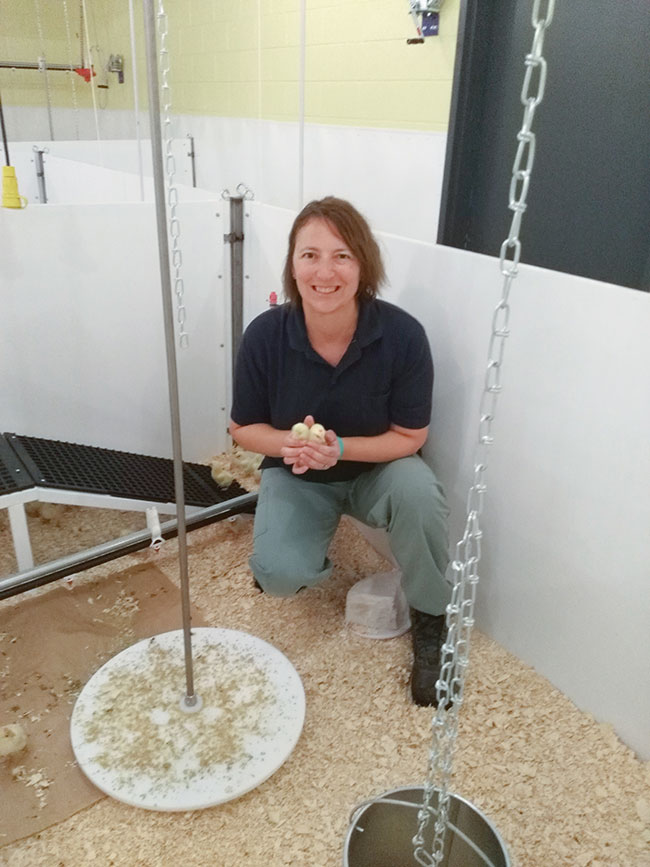 The University of Guelph’s Stephanie Torrey (pictured here) and Tina Widowski studied the behaviour and health of more than 7,500 chickens in a project comparing slow-growth to fast-growth broilers. PHOTO CREDIT: Stephanie Torrey

Results from a wide-ranging University of Guelph study into slow-growing broiler chickens may help poultry breeders and producers breed for better welfare.

The world’s largest, most comprehensive study of broiler chicken welfare offers fascinating insights into the relationships between bird welfare and the realities of modern productivity.

Over the last several decades, improvements in genetics and nutrition have led to modern broiler chicken strains that grow larger than in the past, and at a much faster pace with higher breast yields – the most in-demand part of the bird.

The trade-off, many welfare advocates have argued, is poorer health and overall decreased welfare for the birds.

There’s a growing body scientific evidence to back it up, including this study led by animal biosciences professor Tina Widowski that included a team of poultry welfare, nutrition, physiology and meat science experts at University of Guelph.

The growth factor
“Overall, we found that many indicators of welfare are directly related to the rate of growth,” says Widowski, who is also the Egg Farmers of Canada Chair in Poultry Welfare.

Faster-growing birds, for example, were found to be less mobile with lower activity levels. They also had more breast muscle damage such as woody breast or white striping, poorer foot health and potentially inadequate organ development as well.

Members of the research team used wearable devices – think Fitbit-style – on the birds to track and compare activity levels and mobility, and an obstacle test to look at leg strength in the different strains of birds. They also evaluated meat quality and tracked the presence of foot lesions.

The Global Animal Partnership (G.A.P), an animal welfare-friendly labelling program that certifies farms and ranches who adhere to certain production protocols, initiated the project and provided a substantial portion of the funding.

A criterion for G.A.P labelling includes the use of enrichment items in broiler housing, so this was a component of the poultry housing during the trial and researchers monitored birds’ interaction with those items.

“Because we wanted to raise the study birds to meet the requirements for G.A.P, we also used a vegetarian, antibiotic-free diet,” notes Stephanie Torrey, the lead scientist on the study. “We were comparing the welfare of the different strains, so all were housed in the same type of environment.”

Each identical pen housed 44 birds at a density of 30 kilograms per square metre.

The combination of high breast yield and rapid growth resulted in the poorest welfare outcomes among the birds, she notes. The researchers recorded a range of growth rates among the different strains, with some only taking an extra three to four days to reach the same weight as conventional strains whereas others took up to a couple of weeks.

“The birds that took longer needed more feed and water, but there’s not much difference in the management of those birds compared to more rapidly growing conventional strains,” Torrey adds. 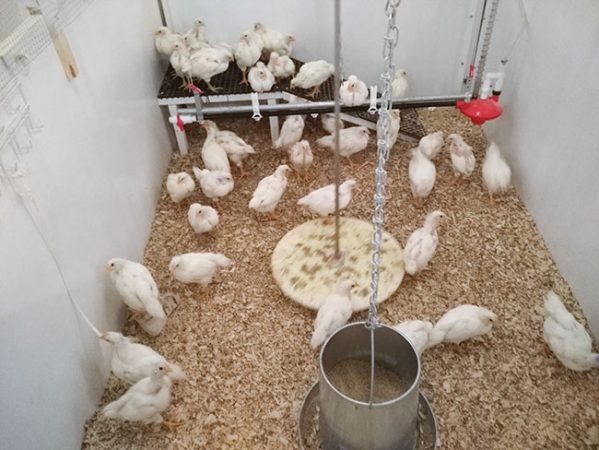 Each identical pen housed 44 birds at a density of 30 kilograms per square metre.

Economic factors
Fewer birds to market per year combined with higher input costs represents a barrier that could be keeping many producers from moving to slower, more welfare-friendly production. Both Widowski and Torrey stress, however, that this project did not focus on any economic aspects of slow-growth production, whether producer costs to make the switch in production systems or longer-term economic viability.

According to Widowski, a decrease in the occurrence of the breast muscle conditions that cause meat quality issues at processing, like white striping or woody breast, could result in fewer losses to producers. However, whether that reduction compensates for higher production costs has not been determined.

“Those diseases are one of the consequences of high breast yield and accelerated growth rate, but we did not do an economic assessment on the impacts on producer profitability,” Widowski says.

This study also did not look at the potential willingness of the marketplace to compensate producers for their increased costs by paying more for chicken raised in this way or Canadian market demand for slow-growth birds. Some estimates suggest slow-growth chicken represents about five per cent of the market in the United Kingdom, and it’s more widely prevalent in Europe too than here in North America.

Good news stories
For Torrey, a surprising yet positive finding from the research was a lack of difference in mortality rates across the different strains. Overall, the mortality rates among all birds in the study was very low, averaging only 2.5 per cent across eight different flocks.

Another good news story stemming from the study lies in what the researchers actually didn’t find. And those are health and welfare issues like leg bone deformities, sudden death and poor bone strength that were prevalent among conventional broiler strains 15 to 20 years ago.

“We didn’t see any of that, which shows that selection for welfare traits has been successful at alleviating those problems,” Widowski says. “So, issues we see now could possibly also be mitigated by putting traits into selection programs that will reduce current welfare problems.”

Moving forward
Research results were recently made public by G.A.P and the research team is now preparing a series of research papers for publication. In the meantime, the outcomes have been shared with the breeding companies who participated in the project. “They can potentially make changes or look further into welfare traits in their particular lines,” Torrey says.