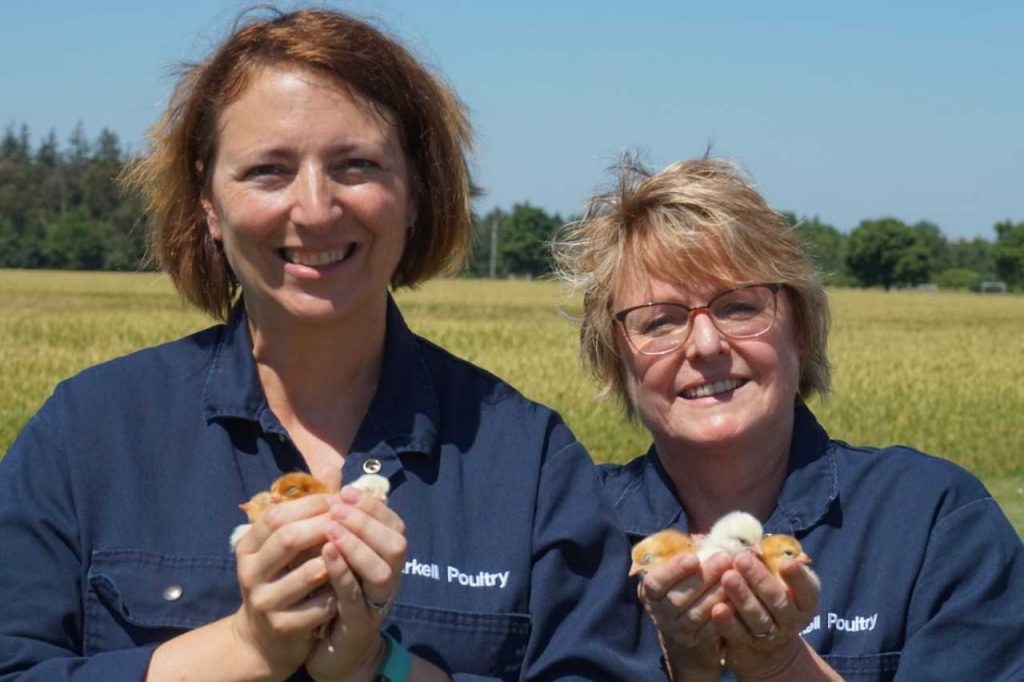 U of G senior research associate Stephanie Torrey and Prof. Tina Widowski holding chicks that are part of a research project aimed at improving broiler chickens’ health and welfare. University of Guelph

In a $1-million, first-of-its-kind study at the University of Guelph, upwards of 10,000 chickens – all wearing fitbit-like devices to track their activity levels – are being monitored in research to improve health and welfare of hundreds of millions of birds raised in North American poultry operations.

The study, headed by animal welfare expert and U of G professor Tina Widowski, is expected to provide key information for ensuring that broiler chickens – the world’s most popular meat – are raised not just quickly and efficiently but ethically as well.

“Animal welfare has become a big part of the notion of sustainability – how to improve welfare and create a healthy environment, and how to make it economically feasible,” Widowski says.

About 23 billion broiler chickens are produced worldwide; Canada produced more than 700 million of the birds in 2017.

Most North American broiler chickens are conventional, fast-growing birds that reach a market weight of 2.1 kilograms in about 35 days.

Developed over the past half-century through a combination of selective breeding and genetics, better nutrition and improved husbandry practices, those growth speedsters also pack on proportionately more breast meat and less bone.

But fast-growing modern broilers are susceptible to immune system and musculoskeletal problems, said Widowski, an animal biosciences professor and holder of the Egg Farmers of Canada Chair in Poultry Welfare and the Col. K.L. Campbell University Chair in Animal Welfare.

Often, their legs are not strong enough to support their meaty bodies, making it difficult for the birds to walk. These sedentary chickens spend much of their time sitting and lying on litter in their free-run houses, which can lead to foot and skin problems, she said.

“Animal welfare concerns for these fast-growing chickens have led to the development of new, slower-growing genotypes,” Widowski says.

Slow-growing chickens take at least a week longer to reach market weight than conventional birds and are reported to have improved welfare and better meat, she added.

Broiler chicken health and welfare is a focus of the Global Animal Partnership (GAP), an organization based in Austin, Texas. Over the past year, dozens of multinational restaurants, grocers and food service companies have pledged to source only broilers raised under GAP standards.

However, conventional chicken producers argue that raising birds more slowly will add expense, particularly in extra feed, which accounts for about 70 per cent of producer costs. “It’s a very contentious issue,” Widowski says.

What’s missing in the debate, she said, is research to back up those welfare standards and to determine optimum breeds and management methods. Looking for that information, GAP came to U of G for help.

Referring to the University’s strengths in poultry science and welfare, she adds, “Here at Guelph, we have the capacity to do that.”

U of G researchers are now assessing 20 strains of conventional and slow-growing breeds. They’re tending about 1,000 birds at a time, hatched from eggs supplied by the world’s largest breeding companies.

Three grad students and a post-doc researcher are tracking the birds with various instruments, including the “chicken fitbits.”

By monitoring behaviour, physiology, health, production and meat quality, the team hopes to nail down welfare indicators for all strains.

“This study will provide information people can use to make decisions,” says Stephanie Torrey, a senior research associate in the Department of Animal Biosciences.

U of G received a total of about $1 million for the study from GAP, U of G’s Food from Thought project and the Ontario Ministry of Agriculture, Food and Rural Affairs.