For more than two decades Tony Greaves was what used to be called an
ink-stained wretch as editor of Canadian Poultryman. In that capacity,
and later as a contributing editor he served the poultry industry and
agricultural journalism with distinction. 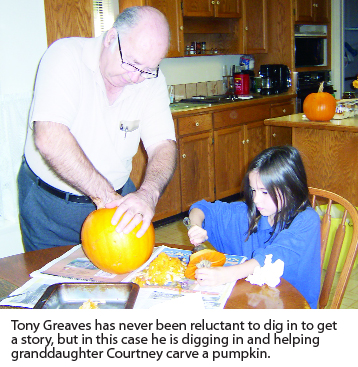 For more than two decades Tony Greaves was what used to be called an ink-stained wretch as editor of Canadian Poultryman. In that capacity, and later as a contributing editor he served the poultry industry and agricultural journalism with distinction.

He worked hard and provided both insight and humour that set a standard and leaves those who worked with him and now following him struggling in the wake.

For more than 20 years Tony and Claudia Greaves were this magazine.

Their contributions to the industry are too numerous to list – for that one would have to survey every page of every magazine published since 1983 and talk to the tens of thousands of people who were affected by something Tony wrote and published and that Claudia ensured made it through to print.

The Canadian Egg Marketing Agency (CEMA) captured the fullness of his contributions writing:

“It would be very difficult, perhaps impossible, to measure the contribution that Tony has made to Canada’s poultry and egg industries and to agriculture journalism in Canada. He turned Canada Poultryman (as it was known then) into a much-needed vehicle to disseminate news about and for the poultry and egg industries. In his magazine, he gave us a mirror upon which to reflect about ourselves, our strengths and our weaknesses. He traveled across Canada to poultry and egg industry meetings, interviewing farmers and processors and writing about what was important to them. His exuberance and energy others can only hope to emulate.”

Tony was seemingly everywhere and knew everyone. He attended and covered annual meetings for the magazine. He to talked and wrote about producers. He passed along the latest research developments and improvements in technology.
He was also a staunch and consistent supporter of supply management.
The CTMA offered their sincere and heartfelt congratulations Tony’s retirement and said:

Amidst all of the changes in our industry over the past several years, you have been among the few constants; consistent in your thorough reporting and always thought-provoking in your comments and columns.
We, of course, will miss you, after many years of faithful contributions in the Canadian Poultryman/ Canadian Poultry Magazine and your ready backing of supply management in the poultry and egg sectors. Your clear support has often been peppered with well informed reminders about the merits of the system and about the early contributions of so many who have made national orderly marketing a reality… a message well received.
Thank you for your involvement in our industry and your commitment over such an extended period.

For all his accomplishments and his contributions in 1996 Tony was awarded the Ontario Poultry Council’s Award of Merit.  He was then awarded the Canadian Hatchery Federation’s Max Wiener Award in August of that same year.
In an editorial in October he wrote about the awards.
“Two major awards in one year! Air Canada subsequently warned me that they’ll start charging for extra baggage if my head swells any further.”
He continued on to say that when he looked out at the sea of faces at each of the ceremonies he saw rooms filled with people working hard for the good of the industry.
“The difference between them and me is that there are few poultry magazine editors and I just happen to be more visible, running around at meetings and attracting attention by firing off my flash.”
However he went on to thank the industry for bestowing the honours saying “It means a great deal to me – and to my wife.”
He also added that there is a group of people “who get little or no public appreciation – our spouses and our staff.” “Without our spouses and our staff, we’d be in poor shape indeed.”
They seldom get deserved appreciation and Tony made a prominent point of ensuring they received full credit by putting the following in bold face type.
“Dear Claudia, Dorothy, Irene and all those other people, both staff members and board directors who, over the years, have made my jobs so much easier: Thank you so much for your support, loyalty and effort. Without you I couldn’t have done it and it certainly wouldn’t have been as much fun!”
The self-deprecating wit, the humility and the acknowledgement of the essential contributions of others was typical of Tony.
While Tony may play down his contributions others don’t. For example, the Chicken Farmers of Canada said:

Tony, thank you for your lasting and personal contributions that you’ve made to ensure that Canada’s poultry industry is firmly entrenched in the Canadian agricultural landscape. Over the years, your perspective has been irreplaceable; whether it was around the board table, as publisher of the Poultry Magazine or as Canada’s avian ambassador. You have been a long-time friend to our industry and to the players within it.
Your wisdom, dedication and spirit have inspired others to succeed. Thank you for contributing your time and knowledge as well as for being involved in the industry these past few years (almost 50 can you believe it?). It wouldn’t have been the same without you.
Best wishes on your retirement! It’s hard to imagine you being “retired”, but we bet you will celebrate your accomplishments and newfound freedom by being productive, creative, and inspiring in this new phase of your life.

In 2004 Tony was honoured again being named among the top fifty people for their contributions to the Canadian poultry industry over the past 50 years in Canada’s Who’s Who of the Canadian Poultry Industry.
Deciding that Tony deserved to be among the 50 was easy. Deciding that we should include one of our own was much tougher. Unknown to Tony, the discussion ranged back and forth for several weeks between “he’s earned it and deserves it” and “but he’s one of us.” Eventually contacts with people across the poultry industry settled the matter. They were universal in saying that Tony was a member of the top 50 and to leave him off would be a disservice to the industry.

Tony has spent his life working in, and writing about, a subject he loves – poultry. Anyone wanting evidence of that need only read his “Parting Shot,” the anchor editorial in Canadian Poultry Magazine.
He tirelessly attended industry meetings and events for Canadian Poultry collecting information and then weaving it “à la Tony” into articles and editorials that were accurate, educational and, above all, interesting. His written word became topics of discussion at the kitchen tables of rural Canada and in agricultural boardrooms across the country.
With his retirement from the magazine, Tony’s mentorship and knowledge of the poultry industry will be greatly missed by colleagues and his readers. He may be a small person in stature (sorry Tony) but he certainly has left some mighty big shoes to fill!
– Marilyn White, Manager, Research, Education & Communications, Poultry Industry Council  and past editor, Canadian Poultry Magazine

As for Tony’s background he has written about it himself over the years, but always as an anecdote to drive home bigger points.
Briefly: Tony grew up near Leeds, England the son of two teachers. He became interested in agriculture while working part time and summers on a nearby farm.

In 1957 he emigrated to Canada with the intention of heading for Vancouver, but got diverted and worked one winter on a farm north of Edmonton where he learned, among other things, the finer points of using an outhouse in the middle of a Prairie winter.
“I found that the best strategy was to lift the lid and sit down quickly before the chimney effect caused the draft to start blowing too hard through the hole.”

In 1958, he worked as summer relief at the Alberta Random Sample Test Station. He then became a chick salesperson with Prairie Hatcheries in Regina. He later purchased the company from Harold McLellan.

He worked as a hatcheryman through the 1960s and 1970s before becoming manager of the Saskatchewan Chicken Board. In the fall of 1983 he became editor of Canadian Poultryman.

More recently he has been a contributing editor of the magazine and was supposed to be partially retired. But you would never know it based on the volume and quality of the columns and articles.

What we do know is that in addition to his journalistic endeavors Tony and Claudia have taken up ballroom dancing, that Tony is a skilled painter specializing in watercolours and has a garden that is the envy of Marilyn White, a master gardener.

In his first editorial for the magazine way back in 1983, Tony said that he was following two distinguished editors and hoped to do justice to that legacy and to serve the Canadian poultry industry as well as they had.

Tony both met and exceeded that goal.

Alan Blakeney, a former premier of Saskatchewan once said (and it has also been said by others) that the reason we stand so tall and see so far is that we’re standing on the shoulders of giants.

Related
FROM THE EDITOR: July 2006
All Things Considered: July 2006
Tooting it up again
From the editor: November 2016
Editors’ Picks
Digital Edition