Chickens in the greenhouse

The “poultryponics” project kicks off this spring in the Northwest Territories. 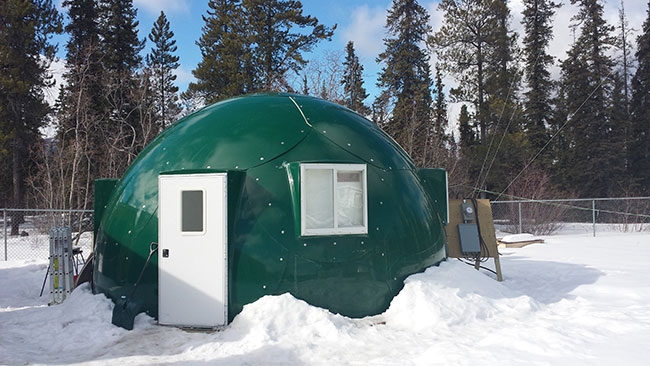 As many of us have heard on the news recently, food security in Northern Canada is a serious problem. Most people in the Far North are completely reliant on food produced in the south. Food is generally very expensive, but fresh fruit and vegetables in particular cost three to four times what they would elsewhere. Numerous new greenhouse initiatives are underway to address the problem – most of them employing high-tech green energy solutions and extremely high levels of insulation.

But Scott wasn’t satisfied. He’s among many who believe the heat, light and other synergies of a greenhouse should be used to support production of protein as well. In 2015, he was speaking to Kevin Wallington (head of marketing and sales at Polar Egg in Hay River, NWT; more on this later) about the possibility of combining vegetable and egg production. They brainstormed and approached the Canadian Northern Economic Development Agency (CanNor), the Aurora Research Institute and the N.W.T. Ministry of Industry, Tourism and Investment to help complete their joint demonstration project. The rest is history in the making.

The hens, about 200 of them, will be housed in a hexagonal base structure. The AgriDome situated above will have new hydroponics towers that will support the growth of 2,500 to 3,000 plants. Initially they will grow tomatoes, peppers, basil, kale and swiss chard, but later on, various herbs, vine plants such as cucumber and zucchini, and heavy fruiting plants like cantaloupe will also be grown.

In terms of synergies, some waste plant material will be fed to the hens (reducing the amount of feed required from the south), and chicken manure, in turn, will be treated in a bioreactor to produce fertilizer for the plants. Scott says the bioreactor (designed by Dr. Nick Savidov at Lethbridge College in Alberta) is basically a large tank in the centre of the structure that continually stirs the manure. Oxygen is bubbled through the mixture, causing an aerobic digestion process. “This reaction will produce a nutrient solution which will be fed back to the plants and a ‘slurry’ that could be used to augment agricultural soils,” Scott says. “It will also produce a substantial amount of heat.”

Indeed, so much heat will be produced by the bioreactor and the HPS lighting that Scott expects much of it will be vented. “A bioreactor of this size is capable of heating the entire building, but because the HPS lights in the hydroponics area also produce excess heat when they are on, the heat from the bioreactor will only be used up to 25 per cent of the time,” Scott explains. “This opens up the possibility of using excess heat to support flocks of meat birds in addition to the structure during the spring and the fall.”

Temperatures will be carefully managed by a computer-controlled heating, ventilation and air conditioning (HVAC) system, which will redistribute warm air throughout the building or vent it to the outside. All air exchanges to the hydroponics area will be run through a filter to prevent any contamination and through a dehumidifier to recover as much excess water as possible. “Because the building will have a very strong vapour barrier built into its envelope, it’s expected that water consumption can be reduced by as much as 95 per cent compared to a conventional hydroponic operation,” Scott explains.

Wallington says the 200 hens will have the same amount of space as they would in any other free-range housing set-up, with access to the outside in the summer. The eggs will be graded at the Polar Egg grading station (accredited by the Canadian Food Inspection Agency) with the rest of the company’s production. The “poultryponics” eggs could be marketed separately in the future, however, as free range eggs, if Polar Egg completes plans to modify one of its barns to free-range production with an outdoor enclosure.

At press time, the base structure was slated to be built in March, and the AgriDome was to be moved from Whitehorse to Hay River by the end of March. The chickens were scheduled to arrive by the end of April.

EGG PRODUCTION IN CANADA’S NORTH
In 2015, Canadian Poultry reported on Polar Egg, owned by Hay River Poultry Farms. Hay River and its sister operation, Choice North Farms, produce about 37 million eggs per year at a single site and send them south for grading and distribution. In 2012, Polar Egg, with its grading station, was created specifically to produce eggs for NWT consumers. Production totals about 203,000 dozen per year.

In terms of new developments, Wallington says, “We are preparing to move forward to a half-carton package for single people, seniors and people who are here working for a week and staying in a hotel with a kitchenette. Last year, we began selling bagged feed to local backyard poultry producers, made by our feed provider in Edmonton, and sales are going well. We are excited about both of these initiatives and about some new building we’ll be doing, now that a long-time temporary quota allocation has been made permanent.” Another possible development concerns the common packing area shared by Polar Egg, Hay River Poultry Farms and Choice North Farms. It’s currently heated with propane, but this will likely change to wood pellet heating once a large local biomass project is operational. The barns are not heated, as the chickens provide their own heat.