2016 saw the 10th consecutive year of growth in retail egg sales and this year may be even better. 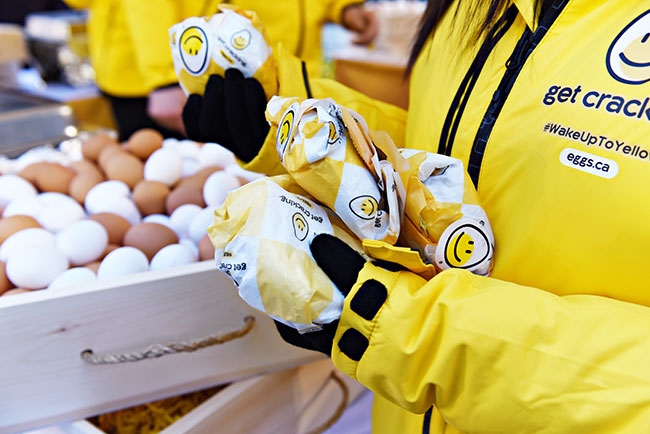 Last year marked a spectacular achievement for the Canadian egg industry. “It was the 10th consecutive year of growth in retail sales of eggs,” says Bonnie Cohen, Egg Farmers of Canada’s (EFC’s) long-time director of marketing and nutrition. “In addition, our end-of-year data for 2016 shows that retail sales increased 5.6 per cent over 2015, which translates to an increase of 16.8 million dozen.”

Indeed, retail sales are going up in every category – regular white or brown, organic, omega-3 and every other type.

“About 85 per cent of sales right now are regular white or brown and we think that, mostly because of all the other specialty eggs now available, omega sales have decreased from 12 per cent about 16 years ago to about eight per cent of current national sales,” Cohen says. “Organic/free range/free run eggs have increased to a little over seven per cent. Eggs are a quick purchase, with consumers tending to pick up the same eggs that they’ve purchased many times before. There is certainly a fantastic variety of choice now, but most sales are still regular white or brown.”

Marketing efforts by EFC and the provincial boards over many years have had a lot to do with this degree of success, but a number of strong recent trends are also boosting egg sales across the country.

It’s a perfect storm in reverse, if you will – and one that’s likely going to keep egg sales strong far into the future.

Here’s a closer look at the factors making more cartons fly off the shelves.

Change in perception
Increasingly, consumers see eggs as a very natural food, Cohen says. In an era where trust in the food system is historically low and concerns abound over genetically modified food products, artificial colours and flavours, additives and more, eggs are widely perceived as an unchanged and natural dietary choice that people can count on.

Hunger for protein
Staff at both EFC and Agriculture and Agri-Food Canada (AAFC) note an increased consumer demand for protein-rich food in recent times has also boosted egg sales. Protein is perceived these days as very important in helping a person feel full for longer periods of time, thereby assisting them in weight loss or weight maintenance.

Affordability
Cold cereal has been a very popular breakfast choice for many years in Canada, but steadily higher prices have caused many consumers to seek alternatives. “Boxes of cereal are smaller than ever and cost always seems to get bigger,” Cohen says. “Many parents also perceive some cereals as a poor nutrition choice with little protein and lots of undesirable or unnatural ingredients. Eggs are the direct opposite.”

However, while eggs are a much more economical protein choice in every meal, Cohen notes most people aren’t replacing meat with eggs at supper or lunch. “Most eggs are eaten at breakfast, and that’s where we promote it the most,” she says.

Interestingly, the McCormick 2017 Flavour Forecast (a highly anticipated annual food industry prediction of the hottest new spice trends) has a large focus on eggs. McCormick forecasts egg yolks will be very popular in dinner and luncheon dishes this year, with the use of heady spice blends like shakshuka, an exotic mixture of smoked paprika, cumin, pepper, cayenne, turmeric and caraway. The popularity of the Flavour Forecast – and perhaps eggs – is also tied into the fact that more Canadians are cooking at home to save money and explore exciting new flavours and ingredients with family and friends. Many experts have noted that this trend began with the recession of 2008, but it’s still going strong.

Demand for egg whites
AAFC identifies increased demand for products containing only egg whites, such as yolk-free omelettes and breakfast sandwiches, as another factor in increased egg sales. However, EFC regularly purchases data on restaurant sales, which Cohen says shows “there has been an increase in sales of egg salad sandwiches at Tim Horton’s over the last several years and the Egg McMuffin at McDonald’s, and these contain the whole egg.” This increase in whole egg products may be related to the current understanding among consumers that cholesterol in egg yolks is nothing to be worried about (see more below).

Marketing
For about the last decade, EFC has focused much of its marketing efforts on debunking the myth that eggs are high in cholesterol. “The cholesterol myth was still strong several years ago, but our physician education program was very successful, along with educating dietitians and doing media campaigns,” Cohen notes. “All of it contributed to the success. We went directly to medical professionals and educated them about the nutritional content of eggs and the science behind dietary cholesterol and once they understood, their recommendations to their patients on how many eggs to eat per week rose dramatically.”

Several years back, EFC also had concerns about the labelling for cholesterol on egg cartons: it’s listed in milligrams and looks like a very large number compared to the number for fat, for example, which is stated in grams, but this isn’t a big concern anymore. “There is no daily value associated with cholesterol and it’s measured in milligrams all over the world,” Cohen explains. “In addition, cholesterol claims for other foods were changed quite a while ago, and while it’s taken time to fully sink in, it’s also been a positive development.”

In addition, brand new guidelines from Health Canada, the Canadian Paediatric Society, the Dietitians of Canada and the Breastfeeding Committee for Canada all now state parents can begin feeding eggs to their babies starting at six months of age in order to reduce the risk of developing an allergy. Cohen believes this will also help egg sales stay strong or even grow in 2017.

As for the marketing plans going forward: “The cholesterol thing was a huge issue for us and we spent a lot of time and effort on that directly with doctors,” Cohen says. “As that issue has subsided, we’ve really started to focus on reaching out to consumers through social media and having conversations with them about things that they are interested in. More and more people want to know where their food comes from and who better to hear it from than egg farmers?”

Indeed, farmers are the new Canadian egg celebrities. (This is a switch from years ago, when EFC employed two famous women hockey players to promote eggs as a high-quality protein and energy source.) In 2016, EFC held “Wake Up to Yellow” events in Toronto, Montreal and Vancouver, where Canadian egg farmers handed out free egg sandwiches amid giant daffodil motifs. This campaign comes back to the “natural” food source message, Cohen says, and farmers are the most natural choice to convey that.

However, she notes there’s still a lot of work to be done to connect farms with everyday people. “The provincial boards do a great job – they go to agricultural fairs, to shows, to classrooms,” Cohen says. “In Quebec and Ontario, they take trailers to events, and Burnbrae [Farms] was at the [Calgary] Stampede with Egg Farmers of Alberta last year.”

In late January, EFC began further connecting farmers to consumers through a TV ad campaign, and Cohen says based on EFC’s research, it will be the most successful ad yet.

“We’ll also be focusing this year on feeding egg to your baby by six months of age to avoid allergy risk,” she says. “One other focus is helping Canadians eat more eggs in the morning. Some people eat them during the week for breakfast, but many only do so on the weekends because they feel they’re too busy during the week. We’re trying to get a better understanding there and give them tactical ways to eat eggs on weekday mornings. As part of our research, we’ve had women videotaping themselves and their families.”

Cohen notes that there are still a number of people concerned about hen welfare, but that she and her colleagues at EFC, along with their provincial counterparts, have done a lot to show Canadians they can trust that hens are being looked after in a responsible manner. “Due to a variety of factors, the Canadian egg industry has made commitments to move completely away from conventional cages,” she says. “That is very positive. People have seen things online that aren’t pretty and we’d like to, ideally, get every Canadian out to a farm so that they can see how things work, but through social media and talking to farmers in person, we are using many avenues to help people to feel good about where their food comes from. Our research shows that there are a few things in production that consumers are really concerned about relating to the egg itself, and we had a very successful national radio campaign educating the public on how eggs have no added hormones or steroids, and why people can trust eggs as a safe and natural, high-quality food source.”

According to AAFC, over the last 30 years, only the years from 1980 to 1986 posted higher per capita egg consumption than 2015. Almost 22 dozen eggs were eaten per Canadian in 1980, compared to 19.4 dozen in 2015. This trend towards higher egg consumption due to affordability, demand for protein and other factors is expected to continue in the medium to long term, says Jalila Soudari, market information officer with AAFC’s market and industry services branch.

Cohen concludes that affordability and other factors have certainly made a big difference in egg sales, but that the marketing is “really big.”

“It’s all about accessing great research and then targeting messages based on that research,” she says. “We also work with the U.S. egg folks and they are also seeing growth.”