A major genetic breakthrough could spell an end

A major genetic breakthrough could spell an end to the coccidiosis problem facing Canadian poultry producers. But since that isn’t likely to happen any time soon, producers will have to use other methods to deal with the disease. 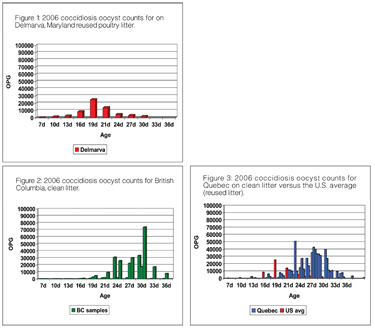 A major genetic breakthrough could spell an end to the coccidiosis problem facing Canadian poultry producers. But since that isn’t likely to happen any time soon, producers will have to use other methods to deal with the disease.

Dr. Linnea Newman told attendees a poultry producer forum sponsored by the Ontario Ministry of Agriculture, Food and Rural Affairs (OMAFRA) that if birds were ready for market in 25 days coccidiosis wouldn’t have time to emerge. But failing a breakthrough, producers are going to have deal with the problem the old-fashioned way with vaccines, drugs, chemicals and good animal husbandry.

Newman, technical services consultant with Schering-Plough Animal Health, said that in Canada coccidiosis is peaking at 31 to 34 days.  “The processing age and the cocci challenge  are on a collision course,” she said.

In her presentation, Newman spoke of four different coccidial species (E. tenella, E. acervulina, E. mivati and E. maxima) and how different chemicals, antibiotics and vaccines work against each of the four.

While the symptoms are hard to notice it can have a big impact, especially when combined with clostridial bacteria that are everywhere in rural and barn atmospheres. The result is a “perfect storm” of necrotic enteritis, she said.

Ionophores are popular with producers because they not only knock back coccidiosis, but have also worked as an antibiotic against clostridial bacteria and therefore necrotic enteritis. But they are not 100 per cent effective, she said.

Ionophores upset the osmotic balance of the cocci cell and arrest or kill sporozoites or early trophozoites. In effect, the cocci cells pop like balloons, she said.

The problem is some of the parasites will survive and the survivors may slowly develop immunity. Research indicates that cocci populations rise rapidly beginning about day 20 and peak at day 30 and 31.

Although very few of the bacteria are resistant, those few survivors can propagate rapidly and resistance spreads quickly, creating a barn full of resistant bacteria for the next flock.

Newman recently surveyed the coccidiosis situation in Canada and was surprised to learn that coccidiosis and necrotic enteritis are a bigger challenge in Canada than in the U.S.

The Canadian practice of cleaning and disinfecting barns between flocks results in the number of coccidial oocytes in fecal material peaking at higher levels in the Canadian flocks and at a later stage of growth, she said.

Surveys in British Columbia and Quebec show that coccidiosis counts in Canada begin to jump at 19 to 20 days, which coincides with withdrawal periods for ionophores or chemicals; Canadians can’t use these anti-coccidiostats precisely when their flocks are under peak pressure, she said.

U.S. producers see the same thing in recently cleaned barns, but they clean less often and will raise five or six flocks on the same litter.

In the U.S., in barns where the litter is being re-used, coccidiosis counts are higher than in Canadian barns at day 19, but they then drop dramatically.

When there is a coccidiosis outbreak, producers often look at their feed mills. But Newman said the problems aren’t the feed mill’s fault.

All of the anti-coccidiostats are old and recent trials indicate none of them are very effective. With no new ones under development, the poultry industry is relying on rotating among the various older products, she said.

The most effective one in the U.S. is an old chemical that has only recently been re-introduced, she said, yielding up to 81 per cent control. But some of the others are only three per cent effective, she said.

“There’s a lot of resistance out there,” she said.

Newman also cautioned farmers to be careful about switching feed companies. Each one will likely be rotating among the anti-coccidiostats, and if a farmer happens to switch from one mill to another that’s using the same product that was in the feed from the previous supplier, the coccidial strain attacking the flock could be highly resistant to that product.

Canadians are unlikely to follow the U.S. practice of raising more than one flock on litter because ammonia will be a bigger challenge in our colder climate and tighter barns which raises a host of potential problems.

Vaccines can work either alone or in combination with the other control measures, she said. Both Schering-Plough and Embrex have live anti-coccidial vaccines.

Newman recommends farmers rotate vaccines so that any coccidial oocytes that have resistance and have survived in a barn can be effectively countered by the different vaccine, applied to the next flock.

Rotating the vaccines seeds the barns with oocysts that are more sensitive to in-feed treatments. These oocysts were isolated before currently used coccidiostats were developed. In effect, these oocysts take over from current resistant strains.

The result is the vaccine changes resistant populations into sensitive populations that are extremely sensitive to both chemicals and ionophores and are not as virulent as some of today’s resistant strains.

While the vaccines are very effective, they have no antibiotic effect and it can help to use them in combination with an antibiotic, she said.

Newman also pointed to financial gains of $2,718 per flock of 50,000 broilers in trials comparing vaccinated and unvaccinated birds. At six flocks per year, it’s enough to buy a couple of season’s tickets to home games for the Toronto Maple Leafs, she said.