Darkling Beetles: Cause of chick mortality?

Cause of chick mortality? 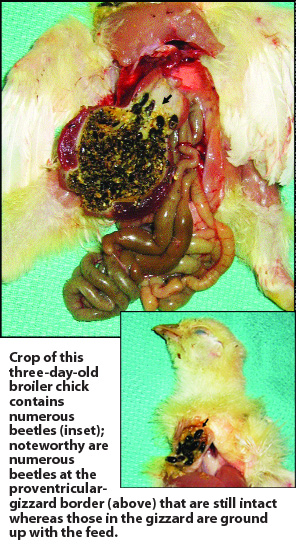 Beetle infestation is an ongoing, worldwide problem of the poultry industry.  Although some beetle species may parasitize poultry and pigeons, they are not significant poultry parasites.  Yet, their mere presence in the barn can cause significant problems.  The developmental biology of the various species is similar.  All species of beetles undergo complete metamorphoses.  An adult beetle lays eggs which after four to 19 days give rise to the fast-moving larvae called mealworms. Larvae consume large amounts of feed and undergo anywhere from 9 to 20 molts before becoming a dormant pupa.  After two to three weeks the pupa transforms itself into a beetle. The full cycle lasts about one year.

There are several different species of beetles in the poultry environment.  In Canada, darkling beetle (Alphitobius diaperinus) is the most common, and problems associated with the infestation of poultry houses are well recognized by producers.   Beetles are attracted by the barn’s warmth, abundance of feed and shelter, and once they take up residence in the barn, a complete elimination of darkling beetles from a poultry house is very difficult, if not impossible.

Undoubtedly, darkling beetles are a nuisance, but they can cause considerable economic losses.  The significance of this problem stems from at least three reasons.  Firstly the beetles are possible vectors of viral, bacterial, and parasitic disease. Secondly they rob the industry of feed volume and quality. Thirdly, by their lifestyle and behaviour they contribute to the structural deterioration of the barns.

However, in addition to the above defined problems, we recently discovered that darkling beetles may be a direct cause of chick mortality.  The cases presented here add yet another harmful effect of beetle infestation, namely apparently lethal toxic effect on poultry.

The present investigation was prompted by unusual post mortem presentation in an otherwise normal flock of three-day-old broiler chicks.  The owner submitted several mortalities for examination to Prairie Diagnostic Services.

On routine external evaluation, the chicks appeared unremarkable, their yolk sacs were properly absorbed and fading, there were no signs of any infection and the carcasses were well hydrated.   Upon necropsy it was discovered that the crops and stomachs were filled with large quantities of dark brown, partially crushed beetle and mealworm parts (Figures 1 and 2).  In view of these findings, and in the absence of other lesions, the unexpected deaths of these birds were speculated to have resulted from some yet-to-be-identified toxic effect associated with the ingested beetles.

POST-MORTEM VALUE
The experience from this investigation illustrates the value of routine necropsy examination of all mortalities.  By doing such examination, even in a cursory way, the producers may continuously learn about emerging and often potentially costly problems.  In this particular case the producer was unaware of the scale of the beetle infestation, so the diligent scrutiny of unusual trends in mortality helped to uncover the cause of the problem.  This incident underlines the need for thorough examination of all mortalities.