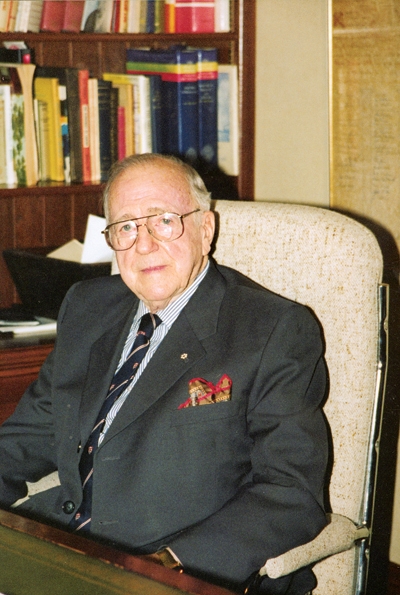 Don Shaver at his home in Cambridge, Ontario. His contribution to the poultry industry has been recognized in many ways.

One of the highlights of last year’s World’s Poultry Congress in Montreal was the presentation by Dr. Donald McQueen Shaver at the opening ceremony.  This took the form of an eloquent plea for action in the field of germplasm conservation, which has become one of Don Shaver’s important crusades since his retirement from the commercial industry. In this case his cause was helped considerably by having Canada’s Minister of Agriculture and Agri-Food sitting right in the front row!  At the end of the ceremony, Don later told me he couldn’t get out of the auditorium because of well-wishers wanting to say “Hello” and recall past meetings and associations.

When Don Shaver retired from active participation in Shaver Poultry Breeding Farms Ltd., in 1985, the company had R & D facilities in Canada, the US, and France, and did business selling grandparent or parent stock in more than ninety countries.

Don first became interested in poultry at the tender age of 12.  He kept a few breeding hens in the backyard of his parents’ home in Galt (later to be incorporated into Cambridge. In 1935, he entered a pen of pullets in one of Canada’s Laying Tests, and it won the award for best layers of the year! At this time, poultry genetics was in its infancy, and nobody, least of all Don, knew exactly how he had accomplished this victory.  His progress in poultry breeding was interrupted by military service in World War II.  Don emerged as a commanding officer of his regiment, one of the youngest to accomplish this.

He then set about re-establishing his poultry breeding business.  He bought stock from almost anyone who would sell it to him.  At this stage, most breeders would sell hatching eggs or even mature cockerels, so Don soon accumulated a wide range of strains and began to systematically evaluate them and, more importantly, crosses between them.  The principle of heterosis or hybrid vigour had been well established for corn, and it now became obvious that it could be used in the same way with chickens.  Of course, the costs and time required to evaluate chicken crosses were much greater. In addition, there was the problem of scientific advice: the business at that stage was much too small to support a professional geneticist.  Only a very few breeders anywhere could do so.  So Don found help, formal and informal, from geneticists conducting research at universities and government institutions.  Among these were the late Professor Fred Jerome, from the University of Guelph, Dr. Rob Gowe from Agriculture Canada, and two very famous names from Cornell University, Professors F.B. Hutt (who in fact was Canadian born) and Randy Cole. Dr. Cole’s association with Shaver lasted well into the 1980’s.

Success came in 1954 with the identification of a highly successful White Leghorn cross, named Shaver Starcross 288 (for the number of eggs it laid in one of the initial tests).  When first introduced, this layer could out-produce any competitor by a significant margin.  In Canada, it quickly demonstrated superiority over domestic rivals, but the market was small.  And Shaver operated only in Ontario, which, while the largest market in Canada, didn’t offer a huge prospect.  So Don began the process of setting up distributors who would purchase his breeding stock and sell the Starcross 288 in other parts of Canada, and eventually around the world.  In many cases, this meant the distributor giving up an existing program to take on the Shaver product.  But its superiority was unquestionable, and many smaller breeders and hatcheries quickly realized that they possessed neither the stock, the skills nor the resources to maintain an independent breeding program.  Among the largest of these was Demler Farms of Anaheim, CA, which became a Shaver distributor in 1967.

The first independent hatchery appointed as a franchise was Greider Leghorn Farms, in Mount Joy, PA who began selling Starcross 288 in 1958.  A major accomplishment in developing the distributor network, even before this time, was the acquisition of Swift’s as a customer in 1952.  This large company had a hatchery in Stratford, Ont., but more importantly, they owned other hatcheries in various parts of the US.  So Shaver became international.

The business expanded rapidly in the 1950’s and 1960’s, and the need for capital injection became pressing.  Don Shaver eventually reached an agreement to sell a large part of the company to Cargill, the privately held grain and commodities conglomerate in Minneapolis.  While Cargill provided little or no direct investment, they enabled Shaver to secure lines of credit for its rapid expansion.  Research and production facilities were built in the US and France.  A subsidiary company already existed in the UK and this was expanded, and its research capability greatly increased.  The great majority of these investments were made out of the company’s revenues.

Another benefit of the Cargill association was their international reach.  In many countries, Cargill managers were able to guide Shaver into new markets, establish joint ventures, and so on.

Early in the development of the company, Don realized that a single product could not be expected to support the production and marketing team involved in distributing it.  So expansion took place, first into brown egg varieties, and soon after, into meat chickens.  By the mid-1960’s Shaver offered a full line of products to an ever-expanding distribution network.  The research, administration, sales and marketing efforts were also expanded.  This writer was the first professional scientist to join the company, in 1967.  Soon, a veterinarian was appointed, along with more genetics staff, and later, technical support staff.  But Don still relied heavily on consultants to augment the technical service offered both in-house and to the customers at home and abroad.  Nutritionists included Professors John Summers and the late Stan Slinger from the University of Guelph.  They traveled the world for Shaver, along with veterinarian Dr. Art Ferguson, from the same university.

Don also began a beef breeding business, based on the same genetic principles he had so successfully applied to poultry.  The beef enterprise was not part of the deal with Cargill, and is still continuing as a family business, currently managed by Donald Shaver Junior.  Under the trade name Beefblend, semen, frozen embryos and live animals are exported to countries in four continents.

Don Shaver’s contribution to the poultry industry has been recognized in many ways.  He was awarded the Ontario Poultry Council’s Award of Merit in 1969.  Since then, he has received a host of honours, both within Canada and internationally. Perhaps the most cherished is his membership in the Order of Canada since 1978, and as an Officer since 1990.  He has honourary doctorates from both McGill and Guelph Universities. He was one of the first to be recognized in the International Poultry Hall of Fame, in Nagoya, Japan, in 1988.  Don is an honourary life member of the Poultry Science Association and the Ontario Institute of Agrologists.  He has served on the Board of Governors, the President’s Council and as Entrepreneur-in-Residence at the University of Guelph.  Both the Ontario and Canadian governments have recognized his immense contributions to agriculture at home and abroad.

Since his retirement from Shaver Poultry Breeding Farms, Don Shaver has taken a major interest in gene conservation, and this was the main thrust of his address at the World’s Poultry Congress.  He was named Honourary Chair of the Canadian Foundation for the Preservation of Farm Animal Genetic Resources.  As a practical example and contribution to conservation, Don maintains, at his own expense, five pure lines of egg type poultry at his home farm near Cambridge.  These lines are held as closed populations and are individually recorded for egg production, egg weight, etc., just like a commercial breeder would do, although on a much smaller scale. This fits perfectly with Don’s lifelong passion for chickens, but serves a deeper purpose as well.  The genetics of these lines are most likely unique in the world, and while none of the breeders has expressed an interest in acquiring them, Don feels that they may one day have commercial potential.

Dr. Shaver has made it his business to know and to meet others with an interest in conservation of animal genetic resources.  The United Nations’ Food and Agriculture Organization (FAO) has undertaken to describe and catalogue all livestock and poultry in the world which are used to provide human food, fibre or draft power.  The head of this project, Australian-born Dr. Keith Hammond spoke with Dr. Shaver at a meeting in Cuba last year and found much common ground.  One of the major constraints to conserving poultry is the absence of any method of holding stocks, other than as live birds.

The technology exists to freeze semen, but ova and embryos defy this technique due to the large amount of yolk material associated with them. While it is possible that genetic research may yield possible methods for conservation, this has not yet reached a point of practical application.

Meanwhile, since his retirement from active participation in the poultry breeding business, Don has led an active corporate life in a variety of fields.  His most challenging position is Chair of the Canadian Development Investment Corporation.  In this capacity, he has been involved in privatizing a variety of Crown Corporations previously under government control.  He has also participated in a number of private corporations in several roles.  One thing you can say about Donald Shaver: Even at the age of 80, when many would be slowing down, very little grass grows beneath his feet!