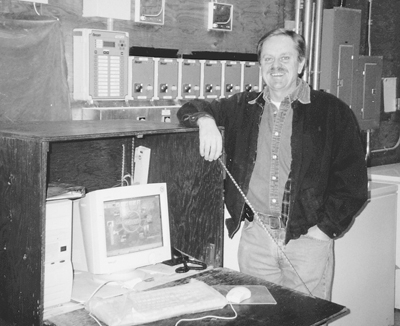 “What I’m doing is just from a farmer’s point of view, using trial and error. I want to improve my bottom line and I found that adding whole wheat to complete feed did that,” John Bartel told me. He added, “As one nutritionist in Germany told me, ‘We sometimes do not know why some things work … but one thing for sure the farmers here in Germany and Holland have proven to us that it does work’.”

Later, Bartel said that he’d found that he shouldn’t fluctuate the wheat percentage up and down. “Don’t jump around unless you have a good reason.”

John Bartel was a dairy producer in the Chilliwack, B.C. area for 23 years until he sold out seven years ago. He now holds a 42,000 roaster quota, although he also manages a 1,600 head, free range, white veal calf operation. When his transitional quota is added in, it means he grows around 50,000 birds per cycle on average. To date his experience with feeding whole wheat has produced results better than he originally expected.

About three years back Bartel came across references to the addition of whole wheat to chicken rations in an effort to improve bottom line results. He found some references to the practice on the Internet and also talked to some Alberta chicken producers who had been using the strategy for a couple of years. One source was an article by Carlyle Bennett, a poultry specialist with the Department of Animal and Poultry Science, University of Saskatchewan, now with the Manitoba Department of Agriculture. Some information from his most recent report and his contact information is shown at the end of this article.

Then, while accompanying his daughter on a school trip to Europe, he spent a free day visiting farms. One of them had been using wheat added to complete broiler feed for some time with excellent results. Bartel reported that some European processors pay a premium for birds that were not over-fat and that the addition of whole wheat to the ration helped meet that goal.

“The genetics of modern birds produces fast growth but a higher rate of ‘flips’,” Bartel said. “But I was told that restricted feeding reduced mortality by 1% as well as reducing feed wastage, which improves the feed conversion.”

He said that he started using wheat quite tentatively, starting with 6% on day 10, increasing by one-half percent per day to a maximum of 20%, continued right through to marketing. He’s used various different programs since then, even starting the flock with wheat at five days—which didn’t seem to provide much benefit for him. He has increased the percentage of wheat by as much as 1% per day, but this is dependent upon the quality of the broiler ration. When the percentage of additional wheat reached the 45 to 50% level he found that the feed conversion suffered, providing no net benefit.

With a mixed roaster flock the pullets are shipped first and the males later. He was advised to cut the wheat off early because of the stress caused by loading the pullets. However, he now feeds the wheat straight through without any adverse affect on his contamination rate.

“I’ve found that I get the best results by starting the flock at 10% additional wheat at 10 days of age, increasing this slowly up to a maximum of 35% wheat and continuing at that level straight through to slaughter.” However Bartel cautioned, “But I must stress that this is what I’ve found suits me based on my trial and error process. If anybody else intends to try adding whole wheat to their chicken ration they would be well advised to start at a more tentative level and build up their own experience before using the higher rates.”

In Case Of Health Problems

I asked Bartel if he has a pre-planned strategy ready for use if his flock encounters a health problem—such as enteritis. He replied that he monitors his flock closely and although he’s never found it necessary, he is always prepared to back off from the addition of wheat by 20% immediately. He said that he’s found that the addition of wheat to his ration has actually reduced his wet litter problem significantly. “I haven’t encountered an enteritis or cocci problem during the 2-1/2 years that I’ve been adding whole wheat to the complete roaster or broiler ration.”

Flock health has improved during his trial of the addition of wheat to his chicken ration, “You know the difference when you walk in to the barn,” he said.

Bartel admits that growth rate slows when wheat is first added, “But their legs are stronger, mortality is lower and the growth rate catches up after about two weeks.” He added that the flock’s feed conversion may be slightly poorer, but is more than offset by the lower overall feed cost. “The odd flock seems to be a day behind in weight, but when the feed conversion stays about the same, what is one day? And the litter is so much drier.”

Bartel adds his wheat using a computer controlled, in-line weigh scale supplied by Fancom. The Fancom FWBU.e computer can be programmed to start adding a specific percentage of whole wheat to the complete feed on a specific day and to increase that percentage at a specific rate per day. Both complete feed and whole wheat fall in to the Chore-Time auger feeder hopper simultaneously. No special mixing paddles are required to provide a good mix.

Each floor of Bartel’s 400’ x 40’ double deck barn is equipped with 13 Shenandoah natural gas brooders per floor. Each has two lines off Chore-Time feeders and four lines of Chore-Time nipple waterers. One waterer line is equipped with ordinary nipples, the other three lines with button nipple drinkers. Lights are controlled by a Fancom dusk to dawn dimmer. The Fancom computers control fans, heat, the vent openings as well as the feeding system. Of course, using both complete feed and whole wheat, he has two feed bins, a 32 ton bin for the complete feed and the 16 ton bin for the wheat.

Aside from the cost of the extra bin and supply auger, Canada Poultryman understands that the cost of computer control and galvanized in-line weigh scale is under $8,000. Bartel summarized, “Results have been beyond expectations and investment pay-back has been much quicker than the two years I expected.”

That talk re-inforced John Bartel’s recommendation of caution when trying wheat addition strategies. Bennett reported that in the UK and The Nether-lands, broiler rations have been diluted with up to 20% whole wheat. He said that the digestion of whole wheat requires a larger, more muscular gizzard, which can only be deve-loped over time–possibly as much as six weeks for optimum development. In the interim, some loss in performance occurs until the gizzard does develop. The question is: does the early slaughter of broilers provide sufficient time for the bird to develop the larger gizzard and gain back the lost performance. Bennett states in his article: “…broilers should not be fed over 30% whole grain.”

However, Bennett’s summary states that University of Saskatchewan trials show statistically significant reductions in leg and skeletal problems in one broiler trial and one tom turkey trial. In those trials, early growth rates were slowed and the most noticeable benefit was fewer valgus varus leg deformities.

Some references to other research into the use of whole grains provided by Bennett included a report by Forbes and Covasa of Leeds University (UK) (World’s Poultry Science Journal, Vol. 51. July 1995). This report indicated that high fibre diets reduced the incidence of coccidiosis.

However, they were unable to demonstrate why a muscular, active gizzard was able to reduce the incidence of oocysts. Carlyle Bennett has advised that he is prepared to send this 16 page article by “pdf” file attached to an e-mail message to those who request it.  A “pdf” file requires you to have Adobe Acrobat Reader–a freely available program from Adobe’s website.

John Bartel alongside his computer controls in his barn. His home computer is also able to monitor barn operations by modem. The galvanized, in-line Fancom weigh scale is fed by augers from his broiler ration and whole wheat bins. Specific percentages of wheat and complete feed are dropped into the supply hopper below and automatically mix as they are augered away to the feed lines.