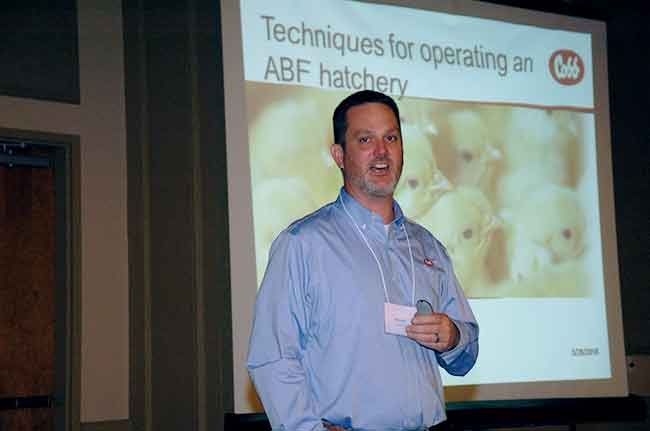 The end of antibiotic use in hatcheries is taking its toll on hatchability and chick quality. To offset that, both hatcheries and hatching egg producers need to pay greater attention to detail, says Cobb-Vantress hatchery specialist Ben Green. It starts with the eggs.

Canada and the U.S. are set to severely restrict and even eliminate the non-therapeutic use of antibiotics in poultry and livestock production by the end of 2017, says Elanco Animal Health regulatory affairs director Randy Bogg.

Both Health Canada’s Veterinary Drugs Directorate (VDD) and the U.S. Center for Veterinary Medicine are proposing to disallow the use of antibiotics to improve performance and require veterinary oversight will be required for therapeutic use, he told the B.C. Poultry Symposium in Abbotsford, May 26th.

“All labels are to be changed by the end of 2016,” Bogg says, noting it will impact over 160 products with growth promotant claims.

The Canadian Animal Health Institute (CAHI) is committed to working with the VDD to develop new labels which define the terms and duration of use. Even though drugs are nationally regulated, usage may still vary among provinces as veterinarians are provincially regulated.

The end of antibiotic use in hatcheries is taking its toll on hatchability and chick quality. To offset that, both hatcheries and hatching egg producers need to pay greater attention to detail, says Cobb-Vantress hatchery specialist Ben Green. It starts with the eggs.

“If (producers) send us junk, how can we make good chicks?” he asks.

Producers should stop sending or at least isolate dirty and floor eggs so hatcheries can handle them separately since “they’re not going to do as well.”

Green says using a low-volatility electrostatic sprayer to spray eggs with chlorine dioxide increased hatchability 4.39 per cent. Cobb is also trying to identify hairline cracks in eggs. While they get an 89.6 per cent hatch from good eggs, cracked eggs only have a 66.4 per cent hatch and chicks are generally weaker.

He also stresses the need for eggs to be right side up when they go into the incubator, claiming 75 per cent of chicks die if they start upside down.

Once hatched, chicks have to be fed right. DSM Nutritional Products technical support manager April Levy says growers should no longer rely on the 1994 National Research Council recommendations as they are based on 1970s and early 80s genetics.

“Today’s broilers are twice as efficient and turkeys three times as efficient,” she points out.

She also advocates biotin and added zinc to reduce footpad lesions in turkeys but admits it won’t help if litter is too damp.

“Most litter is 6.5 to 7.5 pH,” he states, saying the higher the pH the more quickly bacteria will replicate.

He notes all litter has benefits and drawbacks. Wood shavings increase pathogen loads while straw and grass are less absorptive. Sand is good but too much ends up in the crop.

While Gibson recommends a moisture content of 10-20 per cent, CEVA Sante Animale poultry range manager Kobus Van Heerden wants to see it at 25-35 per cent if growers are vaccinating birds against coccidiosis. To be effective, the vaccine needs to be applied at the hatchery, then sporulated on-farm and reingested 2-4 more times.

“Each time it cycles, the immunity gets better and better,” Van Heerden says, saying the damper litter (and a temperature of 26 to 36°C) is necessary to facilitate sporulation.

While many growers start their birds at one end of the barn, then open up the rest of the barn when the birds have grown, Van Heerden encourages them to start the birds in a narrow lane along the full length of the barn, then widen the lane as birds age. That way, vaccine is spread through the whole barn, resulting in more uniform recycling.

The experts not only disagree on the right moisture content for litter, but the right amount. Gibson wants litter to be at least 10-15 cm deep (higher in barns with concrete floors and on second floors and lower in barns with a soil base), saying birds use it to regulate their temperature. However, Martin Roshoj Jensen of Skov A/S suggests starting with only 1-5 cm of litter on a concrete floor, saying a shallow litter allows excess moisture to evaporate.

“We tried it by accident and it worked,” he says, adding a shallow litter also got rid of darkling beetles “because birds can dig them out and eat them.”

Jensen suggests peat moss as a litter, saying many Northern European poultry farms now use it. Before the litter is spread, the floor should be heated to 30-32°C. Birds should be started at a room temperature of 34°C until they reach 175 grams.

RWA Production
Phibro Animal Health nutritionist Mike Blair suggests growers consider using Nicarb as a feed additive instead of vaccinating, calling it “most efficient” at controlling coccidiosis. Nicarb should be added to starter feed at 125 ppm and to grower feed at 100 ppm and used until birds are 28-29 days of age.

Blair claims some American ABF and organic farms use Nicarb year-round but one B.C. producer says he is not allowed to use it in his RWA (raised without antibiotics) chicken.

While some antibiotics may still be used therapeutically, many products have been completely withdrawn. As a result, says retired B.C. Ministry of Agriculture poultry veterinarian Dr. Bill Cox, there is no longer any drug to treat blackhead in turkeys.

To avoid blackhead, growers need to keep the birds as healthy as possible. Barns should be completely cleaned and disinfected between flocks to eliminate histamonids and sealed to prevent entry of earthworms, a primary vector for parasites. Just having a concrete floor is not a solution, the floor needs to be higher than the ground around it.

“Birds on pasture are the greatest risk,” Cox says.

To achieve good C&D, growers should do more than just blow down or air out their barns, says Merial Canada technical services veterinarian Louis Colulombe. He notes a dirty barn has up to 3,000,000 CFU (colony-forming units) of bacteria/square inch. Even after airing out the barn, 2,000,000 CFU’s remain. He advocates washing the barn with detergent and following that with a disinfectant to reduce the bacteria load to less than 1,000 CFU’s/sq. in. He encourages the use of a foaming detergent, as it sticks to walls longer and clearly shows the extent of the coverage.

Concerns over the use of antimicrobials in food animals is driven by fears this will lead to resistance in humans but it is not just humans which could suffer the consequences of unbridled antibiotic use.

“Using antibiotics is a selection process for E.coli,” says Zoetis veterinary services manager Babak Sanei. While E.coli can’t be eliminated in poultry, only a few are pathogenic. The most common result is cellulitis, now the number one reason for condemns in Canada.

Another issue of concern is salmonella enteritidis (SE).

“SE doesn’t make birds sick but it will make people sick,” says B.C. Centre for Disease Control (BCCDC) public health veterinarian Melissa McLaws, claiming B.C. has the highest incidence of SE in the country. The BCCDC is working with the B.C. Ministries of Agriculture and Health and the poultry industry to develop a strategy to remove poor quality eggs from the marketplace. It is also adding SE-training to its FoodSafe program for food preparers and handlers.