The case for insulating poultry houses in all climates. 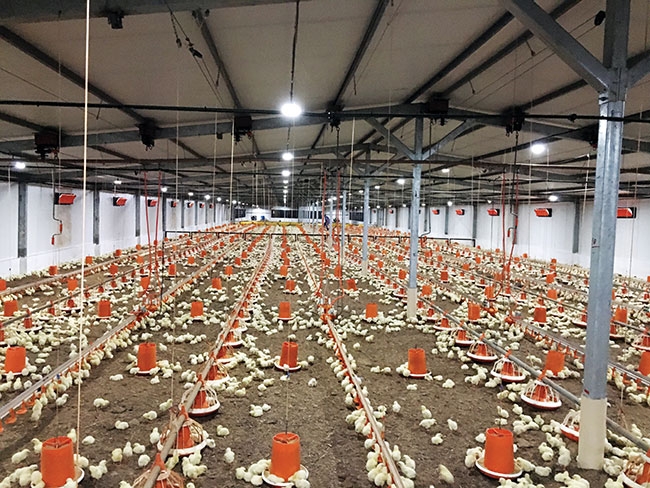 Ceiling insulation and enclosed houses with multiple insulation methods are crucial to the efficient operation of a poultry house.

Good insulation minimizes heat intake in the summer and heat loss in the winter, reduces condensation levels and litter moisture problems and increases the life of a house. With a wide variety of insulation materials available, producers must decide which type works best for them.

Each type of material offers a different level of insulation capacity to meet producers’ needs, which is expressed by a resistance value (R-value). The higher the R-value, the more effective the material is at preventing heat transfer.

One of the most common misconceptions about poultry houses is that, during hot weather, most of the heat that causes heat stress enters the house through the ceiling. Those who have ever been on the roof or in the attic of a poultry house on a summer day can understand why people make this assumption. Studies have shown that metal roofs can get as hot as 160°F, and attic temperature can easily exceed 130°F in hot southern climates.

However, under most circumstances, the number one source of heat in a poultry house is the birds. As birds digest feed, they produce heat. The bigger the bird, the more feed it eats and the more heat it produces. A bird will produce about five BTUs (the amount of heat required to increase the temperature of a pound of water one-degree Fahrenheit) of heat per hour for every pound of body weight. So, a 1.4 kg bird will produce 15 BTUs of heat and a 2.7 kg bird will produce 30 BTUs of heat each hour with no caloric stress. This may not seem like a lot of heat until you consider that there are usually close to 20,000 birds in a 40-foot (12 meters) by 400-foot (121 meters) house, bringing the total BTUs of heat produced each hour to 500,000 BTUs or more.

When air enters a house, it is warmed by the heat produced by the birds and the heat coming through the ceiling. How much the air heats up is determined by the total amount of heat produced in the house and how long the air remains there.

Having quality ceiling insulation is of significant benefit to poultry producers year-round. During cold weather, hot air produced by the brooders, furnaces and the birds quickly rises toward the ceiling. If the ceiling is not properly insulated, this valuable heat will pass through it, resulting in lower temperatures and higher heating costs.

Conversely, during summertime, ceiling insulation keeps the amount of heat entering the house through the ceiling to a minimum. On a hot summer day, attic temperatures in dropped-ceiling houses can easily exceed 130°F. If a ceiling is not properly insulated, heat from the attic space will enter the house, leading to higher house temperatures and lower bird performance.

The most common problem with blown cellulose insulation is its tendency to “slide” away from the peak of the ceiling, which can leave that area with little or no insulation. The movement of the cellulose insulation away from the peak of the ceiling is generally caused by the fact that most dropped ceilings are sloped, the plastic used to support the insulation is relatively slick and constant cycling of exhaust fans can cause the ceiling to vibrate. Additionally, if the eave openings into the attic space are too large, strong winds have a tendency to blow the insulation away from the sidewall. For the most part, this problem can be adequately handled by minimizing the size of attic eave openings.

Insulation shifting can be a difficult and costly problem to solve. Traditionally, many producers simply blow more cellulose in the areas that have thinned over time, while others may place 10-foot-long fiberglass batt insulation at the peak of the ceiling. And now there is a third option: blown stabilized fiberglass insulation. This is a product with special binders that causes the fiberglass insulation to stick together after it is installed. Originally, this technique was developed for use in ceilings in residential houses with slopes as high as 45 degrees where it is challenging to get a blown insulation to stay in place. Over the past few years, it has been installed in a number of both new and existing poultry houses and the results look promising.

For producers with simple, older houses and no financial means to improve the housing structure, we suggest planting trees or installing nets to shade the sides of the house. Even this simple fix can create better conditions for the birds.