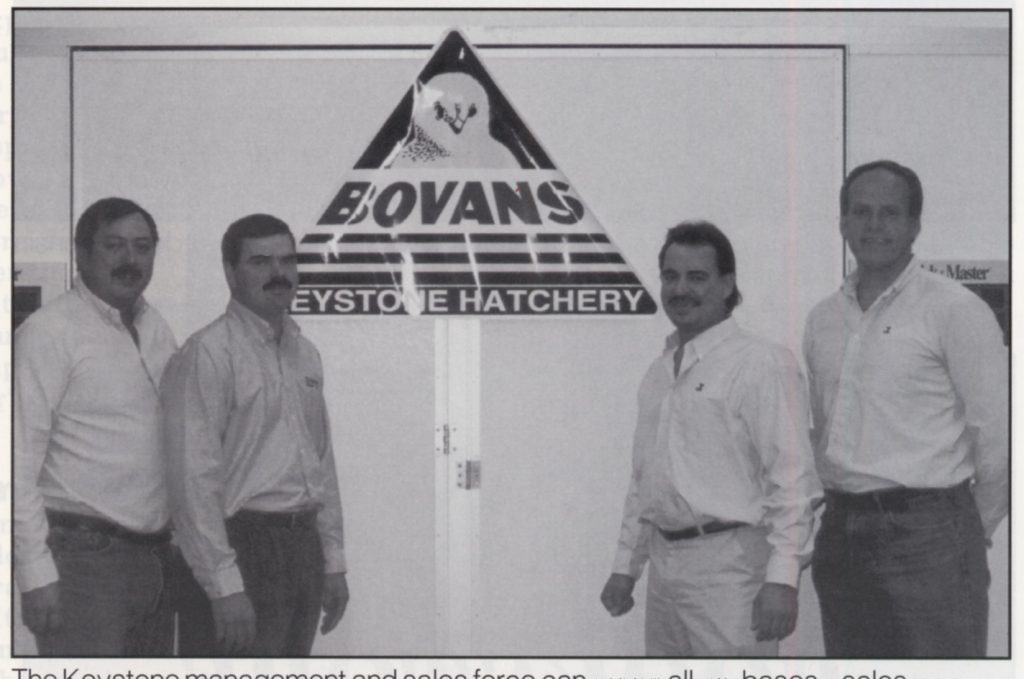 The Keystone management and sales force can cover all the bases—sales, production, and financial management. Left to right are: Calvin Egg, Gilbert Therrien, Larry Klassen and Kevin Duddridge. U.S. sales rep. Gillie Dedrick was unable to be present.

Keystone Hatchery is located right in the town of Niverville, south and slightly east of Winnipeg. From that location they have supplied layer type chicks as far east as Sudbury, west to the Rockies and as far south as Denver, CO.

Larry Klassen, Keystone’s plant manager said that their recent expansion has doubled square footage to 16,000 and increased capacity from 102,000 to 379,000 eggs per week, “and we have the ability to grow even further in our current location,” Klassen added.

The older Chick Master incubators have been replaced with new, state-of-the art machines, each with a capacity of 102,000 eggs. The hatchery layout allows for the operation of two, totally separate sections, each section isolated in a pressurized area. As each array of incubators allows egg sets and hatches twice per week, there are up to four hatch days per week.

Keystone had been working closely with the Chick Master incubator company and were, in fact, the first North American hatchery using the new Chick Master PX hatchers.

Klassen explained, “We’ve found that our Chick Master setters and hatchers give us just what we want and allowed us to use computer software so that monitoring their operation and even controlling them can be done from my office, or even from my home via modem.”

Klassen is extremely proud of his staff.

“They are extremely well motivated with excellent morale and are very willing to work extra long hours.”

Klassen’s father was Plant Manager for Keystone Hatchery from 1962 to 1991. Larry worked at the hatchery for many years, first helping his father. He has been plant manager for the last nine years.

Keystone Hatchery selected the Bovans bird in 1995 and have found it popular with their customers. Kevin Duddridge, Keystone’s General Manager said, “We selected the Bovans White layer because it enjoys the fastest growing market share in North America. This European bird has redefined production excellence and also user friendliness.”

Keystone’s sales area—from Thunder Bay to the Rockies—now extends south into the northern tier states of the U.S. midwest with sales building quite nicely in that area. Duddridge explained, “By broadening our sales area we can attain the necessary volumes needed to optimize production efficiency and price advantage.” Keystone maintains 60,000 breeder hens on two isolated farm locations, each within an hour’s drive of the hatchery.

Keystone prides itself on being an innovative company, conducting at least one production or equipment trial at any given time. They claim a first in Canada with robotic hatchery processing and with field trials on artificial insemination of breeders and they are the first to do research on breeder cages within Canada.

In fact, while doing the interview at Keystone, Plant Manager Klassen took me to one of their breeder farms where they are testing breeders in colony cages in the same barn as breeders in a conventional layout.

Farm manager Klaas Geisbrecht explained that the Specht colony cages had been in use for seven weeks at that time and hatching eggs produced in the cages were first set in early February.

The breeder barn is 172’ long, but split into two sections by a mesh partition. One row of Specht colony cages takes up about 1/4 of the west side of the barn. There are 44 females plus four breeder males in each cage which are stacked three tiers high.

“If we converted this breeder barn to all colony cages, we could install five rows and double the barn capacity to over 11,000 breeders, compared to the 5,800 it could hold with a slatted floor” Geisbrecht said.

Born in England but raised in Canada, Kevin Duddridge has been a Keystone employee for the past 16 years, the last nine as General Manager. Hired in 1983 with a degree in Poultry Science, Kevin was sent back to school in 1989 on a part-time basis, to earn a business degree, which he completed in 1995.

Duddridge explained that Keystone’s sales force is headed by Calvin Egg. “He’s been Keystone’s Sales Manager for the last 13 years. Having a built-in competitive advantage in the form of his surname, Calvin has successfully positioned Keystone as the largest leghorn hatchery in Canada in terms of volume. He and his sales force deserve special recognition for getting us to this point.”

Working under Calvin’s direction are Gilbert Therrien and Gillie Dedrick. “Gilbert has been serving us in Canada for the past nine years and Gillie has looked after our interests in the upper Midwest states for a number of years.”

Having people able to cover all the bases as they do, including sales, production, and financial management, Keystone feels that they are well positioned with a young, aggressive and well trained management team.

Kevin Duddridge stated that the Keystone team is committed to customer excellence and defined that by saying, “If our customers are not realizing the birds’ full genetic potential in the form of bottom line financial performance, then we don’t deserve their business. The job of our sales technicians is to facilitate this objective.” Duddridge added, “We are working towards continued improvements in: customer performance, genetic excellence, production efficiency and lower prices.”

His final comment during our interview was, “The status quo is never an option for us.”