Since airports were already effectively using lasers to scare off wild birds, Dutch researchers thought they could also be effective at protecting poultry barns. They were right. all Photos: Wageningen University & Research

Farmers could soon have a new tool in the fight against the spread of avian influenza. Researchers at Wageningen University and Research in the Netherlands have found that lasers make an effective deterrent for keeping wild migratory birds from landing in the free-range area of poultry farms.

Coupled with other biosecurity strategies, this could be an effective tool as Canada’s poultry producers move to cage-free production.

Activity was almost always isolated for the period between sunset and sunrise, especially from November to February when migratory birds are most active.

Wild birds are known to be a natural reservoir of the avian influenza virus. Experts believe that poultry become infected through oral pick up of contaminated feces from wild waterfowl or through feces-contaminated drinking water. Therefore, it is of the utmost importance to keep wild waterfowl off farm, especially during migration.

Since the outbreak of 2003, the European Union has established an intricate reporting and sampling system that tracks the introduction and movement of low- and high-pathogenic avian influenza (LPAI and HPAI, respectively).

Examining bird movements
Using data tracked on these farms, Dr. Armin Elbers, epidemiology researcher, WBVR, could see that the farms that were within 500 metres of wildlife reserves or bodies of water were the ones that had a higher probability of introduction of LPAI virus, of which some forms can quickly mutate to the high-pathogenic variety.

The data also revealed that 75 per cent of introductions of LPAI virus in the Netherlands were on free-range farms with outdoor access. One farm was hit 10 times. It was important, therefore, to ensure that wild birds be kept off of these farms.

In the first phase of their research, Elbers and his team monitored the farm that was hit 10 times with video camera equipment, recording for 24 hours a day for an entire year. It was an incredible amount of work reviewing the footage, but Elbers says it was well worth it, as he got some very good insight into the types of birds that were visiting this farm.

While gulls were the main visitors in the winter period to the farm during the day, at night, flocks of mallards would come in to settle in the open areas and water pools where the poultry moved throughout the day. Mallards are known to be vectors of infectious animal diseases, especially avian influenza, Elbers says.

Lasers as deterrents
Airports were already using lasers to scare off wild birds. So, it was an obvious choice for farmers. But no one had conducted a study on-farm. Thus, the researchers were uncertain it would work.

Virtually no wild ducks visited the farm when the laser was operating. In fact, the laser prevented introduction 99.7 per cent of the time, Elbers says. Visits from other wild birds were also effectively reduced by the laser.

But is a laser a safe and effective solution? Steinar Henskes, founder of Bird Control Group and developer of the laser, believes it is. The laser has a range of 800 metres to one kilometre and covers 360°. It is projected on the area to be protected. Birds perceive the laser as a physical danger and fly away, Henskes says.

The number of lasers needed on-farm depends on whether or not there are obstacles, such as barns and trees. Typically, one to three lasers are enough, but the more obstacles there are, the more lasers will be needed.

The lasers can be solar operated or run off of grid power. It connects to the app via Bluetooth, where its path is mapped out.

What’s especially nice about the laser is that it is noiseless, so it doesn’t disturb the neighbours. And birds don’t habituate to it, like they do to other deterrents, such as noise cannons.

Bird Control Group is currently in the process of obtaining the Pest Management Regulatory Agency (PMRA) license for Canada.

Biosecurity then deterrents
While there are other deterrents available to farmers who have a migratory bird problem on-farm, Christopher Sharp, population management biologist with Canadian Wildlife Service Environment and Climate Change Canada, says enhancing biosecurity should always be the first course of action.

Initial steps should be controlling the movement of people and vehicles and eliminating access of wild birds to farm buildings and water supplies. Sharp recommends removing standing water and eliminating spilled grain that could attract wild birds.

In addition to these methods, Sharp suggests farmers use fences and movable pens to keep outdoor layer flocks from moving around too much.

Areas can be protected using netting or scaring techniques, but the latter should really be a last-ditch effort, he says.

Producers can get permits from ECCC that authorize specific activities that are designed to reduce conflict with migratory birds.

One tactic is to kill a small number of birds or to remove eggs and nests to dissuade others from using the area. These permits must be justified and are approved on a case-by-case basis. The permits are issued free of charge.

Another popular deterrent tool is a propane cannon, which produces an intermittent loud bang to scare the birds.

The problem with this option is that it bothers neighbours and birds acclimatize to it over time.

Scarecrows can also be effective if done properly, Sharp says. They need be moved around frequently, but work well when combined with other tactics. He says regions that went cage-free early have lessons to share. “Canada has the potential to get it right the first time,” he says. 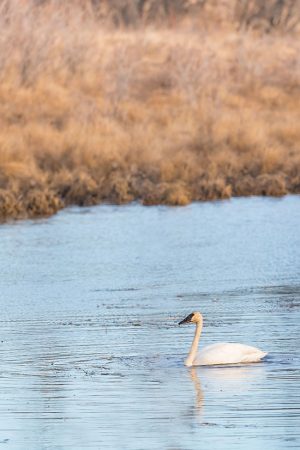 Monitoring movement
Windows of migration are fairly well defined for specific species. Hence, monitoring movement presents another opportunity to minimize interactions. Victoria Bowes works as an avian pathologist at the Animal Health Center for the provincial government in B.C.

The scientist is part of a team that monitors wild migratory birds, like the trumpeter swan.

The Animal Health Center has been monitoring trumpeter swans for 20 years and regularly tests them for lead poisoning. They’ve extended that testing to include avian influenza. In this way, the swan acts as a sentinel that alerts researchers to the movement of LPAI and HPAI.

“Our big concern right now is everything is looking identical to what happened in 2014,” Bowes says, referring to the movement of HPAI (H5N8) through Korea and Japan into B.C. “But what’s very interesting is, with that detection, it became almost a non-event because the industry had everything in place to self-quarantine.”

This story barely made a flicker in the news. What did make the headlines was when the same migratory birds moved into Minnesota in April of 2015. “But to me, the big story is how did our industry, which was the most densely populated multi-commodity poultry production area of all of Canada – how do we only get 11 cases?” Bowes says.

The answer, she explains, is preparedness. Bowes suggests that industry keep an eye on B.C.

“We’re all thinking it’s going to hit us again,” she says. “I’m eyeballing those trumpeter swans as a good source of surveillance data, as well as a possible introduction.”

By the numbers
Scientists from the Wageningen University & Research in the Netherlands analyzed data around avian influenza spread and then trialled a laser to deter wild birds from landing near poultry barns. Here are some highlights of their work.