Carrying on a decades-long tradition of providing fresh and local turkeys. 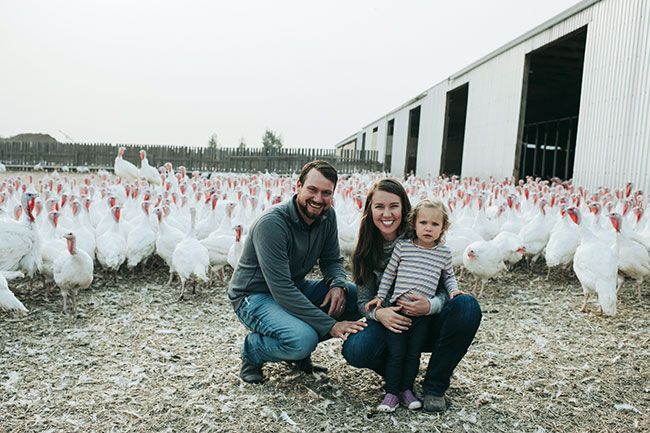 Winter’s Turkeys has been selling fresh turkeys directly to consumers in the Calgary area for over 60 years. Today, Laurel Weigum and her husband Lyle run the farm, although her parents, Darrel and Corrine Winter, are still involved with the business.

It was Weigum’s grandfather Jack Winter who saw an opportunity to add turkey to his mixed farming business, which at the time also included cattle, grain, egg, and pork production. He started selling grain-fed, outdoor birds to neighbours, friends and local meat markets.

“We were doing free-range long before it was a thing, but as the market demand continued, we’ve been capitalizing on that, including adding a certified organic flock,” Weigum says. “We still farm the same land today, but it’s turkeys that have let us stay in agriculture, so we’re thankful that Grandpa Jack had the foresight to see a future in turkey.”

Fresh turkeys for the holidays
Winter’s Turkeys raises two free-range flocks per year, one for Thanksgiving and one for Christmas. Although some sales are from the farm, most of the seven to 12-kilogram birds are sold fresh through local grocery stores, meat markets and natural food markets. A small portion of their production is dedicated to five to seven-kilogram certified organic Orlopp Bronze heirloom turkeys. As their business has grown, they’ve added a range of additional turkey products, including sausage, lunch meats, roasts and ground meat.

“Building retail relationships let us grow substantially over the years and service a wider group of people and grow more turkeys. My grandparents sold turkeys to a meat market in Calgary where today the owner’s son still buys our turkeys,” she says.

Weigum has had a passion for the farm her entire life, coming home from university in the summers. After a few years of teaching after graduation, she joined the business full-time in 2015. Originally from a grain farm north of Calgary, her husband Lyle is also full-time on the farm. He has a unique mechanical ability that “lets him fix anything”, whereas Weigum’s passion is for marketing, relationship building and advocating for the industry.

Telling the story of turkey production
That passion is behind the family’s participation in Open Farm Days. It’s an annual weekend in August where farms and other agricultural businesses across Alberta open their doors for consumers, meet the farmer events hosted by their retail customers. The family also hosts school and bus tours.

“It’s a way to help consumers see where their food comes from. There are many misconceptions about how turkeys are raised, which can drive the narrative, especially with the gap between consumers and farmers,” she says. “We have loyal customers and they become advocates for us as well, but we need to be the ones driving the narrative and letting people know turkeys are humanely and ethically raised.”

“I’ve known Laurel since she was a teenager and I’ve seen her growth from a young teen to running the farm. Now, we have a business relationship – it’s wonderful to see,” Cheah says. “The things she does and that Winters’ have always done to support small business and educating their consumers and ours are wonderful. Our organization is all about being on the farm and to be able to talk the talk and the only way to do that is to forge strong relationships with our vendors.”

“I’ve taken groups of employees out there, and it’s very eye-opening for them to see how much care and hard work goes into putting a bird on the table at Thanksgiving,” she adds. “It’s beautiful to see that care that is taken and it’s very respectful – that’s what you want to see.”

Advocating for producers
Weigum is often on the go-to interview list for media, which she says is somewhat attributable to the fact that the farm, only half an hour from Calgary, is easy to get to. But she’s also well-spoken and knowledgeable about all things turkey – and happens to now also be the chair of Alberta Turkey Producers.

It all started six years ago when she attended an Alberta Turkey meeting during her first year on the farm full-time. The work the board did was eye-opening, she says, and piqued her interest in becoming involved. She’s now in the first year of her second three-year term on the board of an organization that represents both provincial turkey producers and those regulated federally.

“It’s important to have a balanced board. We are provincial growers and market our own birds, so we have different challenges and opportunities than federal growers have, which is one reason that originally got me involved in board work,” she explains.

“But it’s also an opportunity to be an advocate for all producers in Alberta. I’m passionate about ensuring the viability of the future of our industry as turkey growers and I want my children to have the opportunity to take over (the farm) if they want – the way to do that is to become involved and educated in how to make that happen.”

Focus on the future
The rise of plant-based proteins is hard to compete with, she notes, and changing demographics mean fewer families want whole birds. What’s more, newer Canadians aren’t as familiar with turkey as a meat choice. At the same time, turkey continues to be an appealing protein that’s healthy, lean and versatile and there is a lot of opportunity for product innovation.

Winter’s Turkey’s own market development activities are focused on smaller cuts, more value-added products and ready-to-eat options that will make turkey more available and appealing to consumers outside of the festive season. There’s also year-over-year demand growth for their organic products.

“I can honestly say the turkey business has given us an opportunity to live on the farm and raise our kids here and have a future in agriculture and in feeding our community – I wouldn’t give that up for the world,” she says.

“What fuels our fire is hearing the feedback from our customers, seeing people whose parents bought turkey from my parents now come and buy that turkey from me. It is humbling being part of someone’s Christmas tradition and playing a role in their family feast.”