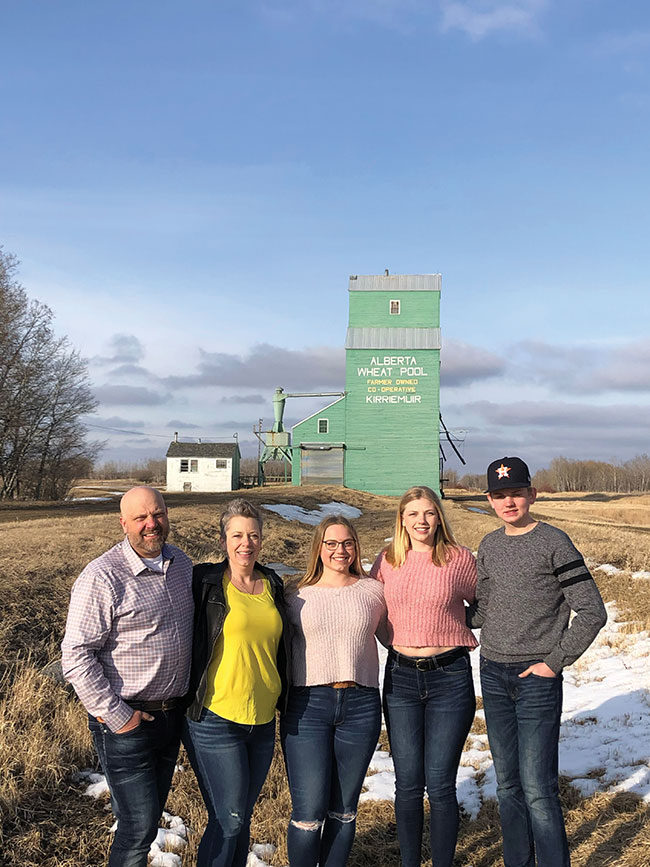 Darren Ference (first on the left) with his wife Carrie, daughters Ashleigh and Ryleigh and son Raine.

A passion for farming – and promoting it – was always there for Darren Ference, who is currently serving his third year as chair of Turkey Farmers of Canada (TFC). For many years, Ference has advocated for agriculture, and especially turkey farming, educating young people about it in a multitude of ways and mentoring them as well.

He was raised with his brothers on a mixed farm that produced grain and beef in east-central Alberta where his grandparents made their homestead. With his wife Carrie, daughters Ryleigh and Ashleigh and son Raine, Ference carries on the family farming tradition. They crop 3,000 acres and run both cow-calf and poultry operations with Ference’s brother Jason, sister-in-law Chrystal and their children Charlize, Neely and Justin.

The family purchased the poultry farm in Gibbons, Alta., in 2001 for several important reasons. For one, they already had some uncles and aunts who were poultry farmers and could, therefore, draw on them as resources if needed.

What’s more, Ference says he and his family were attracted to the stability of the supply management system as a way to help mitigate some of the risks of their other two farming operations. “Farmers get a fair return under supply management and consumers get good prices, good quality, food safety, environmental and animal welfare assurances, so everybody wins,” he explains.

“We also liked the cycle of turkeys. We thought that three flocks a year would work well with the grain farming and the cows, and it has.”

A poultry business is born
Ference and his brother decided to name their poultry farm Raeyson’s Poultry, a combined name to represent them and their parents, Ray and Rae.

Although anything new comes with a learning curve and its own share of early challenges, Ference says that with turkey farming, he applied a tried-and-true philosophy that has never let him down. “Yes, I had to learn how production works, but I don’t believe it matters if it’s crops or cows or turkeys, it’s really important to provide a good start,” he explains.

In three barns, Ference and his family produce 700,000 kg of turkey a year. Two barns have the latest in automation for feeding, watering and environmental control; the producers retrofitted one of these and built another anew after its predecessor was destroyed in a fire in 2017. The Ferences will retrofit the third barn in the future.

A reverse osmosis system treats water for all the barns. The family’s wheat is used in the feed and their canola straw is used as bedding. “We went that way about five years ago when shavings became more expensive and it’s worked well,” Ference says. “In the future, in addition to bringing our third turkey barn up to speed, we will hopefully build a chicken barn and use our chicken quota that we are leasing out now.”

Hands-on advocacy
To say Ference is heavily involved in agriculture advocacy might be an understatement. For starters, in a program run by animal science professor Frank Robinson at the University of Alberta, Ference guides agriculture students who are part of the mentorship program.

The producer also educated youth at the nearby Altario School, which includes 60 kids from kindergarten to grade 12. Ference assisted principal Kevin Van Lagen with the small-scale farm he created last year – called the Ag Learning Centre – by adding a miniature turkey barn. Alberta Turkey Producers provided a $2,000 grant for the project, which houses 40 birds for full production cycles.

Van Lagen lauds Ference’s efforts. “Darren had the idea and installed the mini-turkey barn, setting up a feeding and watering system similar to an actual commercial barn. He donates the feed and poults twice a year. When we have a new batch of birds he’s there every day. And afterwards, he’s there at least once a week and collaborates with the teachers all the time. Darren also arranged for the processing. And from our most recent batch this spring, we donated five turkeys to the local food bank.”

Altario School also runs outdoor education credit courses for high school students from its own rolls and other local schools in the spring and fall, in conjunction with Lakeland College and producers in the area. Students camp out, work in the Ag Learning Centre barn and visit farms like Raeyson’s. “Darren is really passionate about turkey and he wants to raise its profile,” says Van Lagen.

Turkey boards
In 2009, Ference joined the Alberta Turkey Producers board, later becoming chair and past-chair. He served on the board for the maximum nine years allowed. He was the Alberta member on the TFC board for seven years, and is now completing his third year as chair.

“We’ve worked hard together, producers and processors, to regain the market that turkey has lost through changing demographics,” Ference says. “As demand for whole birds has dropped, we’ve made lots of progress with cut-up pieces, ground turkey and other products.

“It’s hard to say what effect COVID-19 will have on turkey consumption,” he continues. “People may value that traditional family turkey meal more than ever, but we will continue to promote turkey in all its forms. People are starting to realize it’s leaner and healthier than chicken and just as versatile.”

Ference adds that as agriculture has made progress in educating Canada’s mostly now urban population and combating misinformation, farmers and the entire food sector needs to stay at the forefront.

“People don’t understand food production so they need to understand what it’s all about, and they also need to be able to trust farmers, that they are looking after the land for the next generations, and keep their animals so that they are happy and healthy,” he says. “People need to see our passion and respect for the land and the animals. We just have to be able to show people and find more ways to connect with people.”

As for his spare time, Ference says, “Carrie and I love to be with the kids, camping, boating and travel. The kids play a lot of sports and there’s a lot of travel with that. I believe a farm is a fantastic place to raise a family. I enjoy all the aspects of agriculture and the challenges every day, problem solving and keeping everything moving forward. It’s a challenging and rewarding career.”