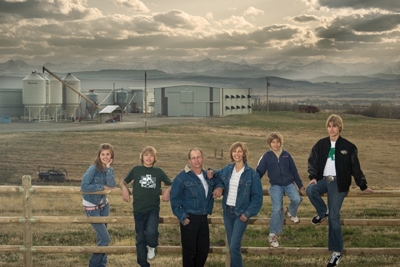 Erna Ference with her husband Reg and four of their five children) says she isn’t afraid to take on a challenge. Chicken Farmers of Canada

“It was a great transition,” says Erna Ference of the decision she and her husband Reg made more than 20 years to leave the city and begin farming.

Born in Ontario and raised north of Toronto in Sutton, Erna began her working life as a legal secretary at a firm in downtown Toronto. But commuting back and forth from Sutton to Toronto (more than an hour’s drive each way) was too tiring, and the prospect of moving downtown wasn’t for her – so she headed West to Alberta during the oil boom of the 1980s for new opportunities.

She got a job with a law firm in Calgary, and not long afterwards she was offered a position with Canadian Western Natural Gas, where she met her future husband, Reg Ference. She also began working on her accounting designation, which she continued after she and Reg married, and she left Canadian Western Natural Gas to take a position with another oil and gas company due to a marriage policy (as employees with the same company, to marry either Reg or Erna had to give up their job).

When they decided to start a family, Erna says they did not want to raise children in the city.  “An opportunity came up to buy a broiler farm from Reg’s parents, and we thought that would be a good environment to raise children.”

So in 1988 they left corporate life behind to farm in Black Diamond, just west of Okotoks in the foothills.  Erna says that the transition from working for someone else to being their own boss was a really nice change, and “that one of the biggest lessons we learned was that when you are your own boss, everything is negotiable.”

“It makes a huge difference, and I couldn’t believe how profound that lesson was,” she says.

Erna finished her CMA soon after she and Reg bought the farm, and both of them worked on the farm while raising five children – Trevor, Byron, Andrea, Benjamin and Stephen.

They lived on the farm, located on the edge of town right across from the hospital in Black Diamond, for several years until Reg’s parents, who still had a smaller broiler operation about three miles further away, wanted to expand.

Erna and Reg helped with this expansion, but given its proximity to town Erna says they opted to downsize the farm across from the hospital and expand the operation outside of town, eventually moving their family and adding a double-decker barn that can hold 70,000 birds.

Reg and Erna purchased the second farm from his parents about 12 years ago, and they now produce close to 85,000 birds at this location, and about 25,000 birds at the “town” location.  A full-time employee lives at that location, and for the past year, Erna’s second eldest son Byron has been closely involved with the management of the larger operation.

Although only 23, Erna says he seems to be really enjoying it and she can see him making the transition into ownership in the future.

Although too busy the first few years they ran the farm to even think about getting involved with marketing and regulation, Erna says Reg was asked to run for a board position with the ACP about 15 years ago, and he served as a director for six years and represented the ACP with CFC.

Not long after Reg stepped down, Erna says numerous people in the industry told her that she would be a good candidate and advocate for the industry.  Prior to making her decision, she was able to benefit from a leadership program that was instituted within the ACP (a program Reg helped develop) that gave potential board members the opportunity to understand what being a leader means “before you take the big plunge,” she says.

Now the chair (elected this year), Erna has returned to the board after taking a year off. Previously she spent seven years as a board director, serving as ACP’s national representative with CFC for four of those years. While with CFC she served on both the Finance and Executive committees, and spent three years as CFC’s representative on the Canadian Federation of Agriculture (CFA) board of directors.

Erna says she is enjoying being chair, but that she still has a learning curve even though she was only away for a year.  “It’s a different role than being a director, that’s for sure,” she says.  “It’s hard to fill someone like (former chair) Scott Wiens’ shoes because he was an excellent leader and was very well respected by many people who tried to encourage him to run for another term, including myself.”

But she’s not afraid to take on the challenge, and isn’t daunted by taking on a significant issue for her board and fellow producers.  The ACP has requested an increase in allocation from CFC, and “we are working hard with CFC to stay within the system,” she says.  “But we are adamant that there has to be a differential growth component and we strongly feel that population should be a part of that.”

She says Alberta has been growing exponentially and the province has been seeing its share of the national allocation drop with each growth in population.  “We don’t think that is very fair, or necessarily reflective of the way the system was supposed to be,” she says.

Supportive of other provinces’ growth plans – particularly those of Saskatchewan and Newfoundland and Labrador – “we have some very specific concerns that other provinces don’t share.”

The ACP proposed the increase six years ago, and Erna was the one who announced the proposal at CFC’s summer meeting in Kelowna. “We always said we wanted to work within the system and we always maintained that was our first line,” she says.

She doesn’t anticipate a quick resolution. “I think it would be nice if it was solved tomorrow but when you are working in the large country of Canada with all the different viewpoints and all of the different regions, it’s a big challenge. Nothing happens overnight.”

When she’s not busy with family and board activities, Erna says she enjoys being active with golfing and running. She only started running at the age of 40, and has since run the Boston Marathon and will be running in the Nike Women’s Marathon with her daughter Andrea the weekend after Thanksgiving.

As for the future, Erna says she sees a healthy poultry industry and her son Byron being involved with the farm.  She sees herself perhaps being involved with a non-profit organization if she could find one that “benefited a lot of things that I value,” she says.

She’s also been thinking about a statistic she heard from a colleague where 30 per cent of high school graduates will be working in an industry that doesn’t currently exist within five years.  “That is an amazing statistic, just mind boggling,” she says.  “There are a lot of changes ahead and I would like to look into something that is new, something that I don’t know.”

“I am a big advocate of continuously learning,” she says.