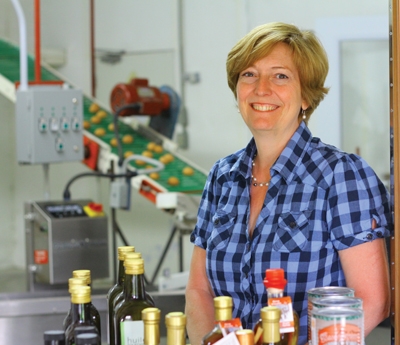 Along with her husband and sister, Martine Bourgeois runs an award-winning farming operation that has diversified beyond poultry.

“I dreamt of working in animal nutrition and I dreamt of having a farm. When one hangs on to dreams, they come true.”

Martine Bourgeois has now been working in animal nutrition for 30 years and producing eggs for 20 years. She has also raised four children, spearheaded several research projects and volunteered on several industry committees.

Last March, Bourgeois became one of five 2012 Rosemary Davis Award winners. This honour is awarded by Farm Credit Canada to women who are active leaders in agriculture and agri-food. “There are a lot of women working in agriculture. It’s important to recognize their contribution,” she says with her usual big smile.

Canadian Poultry magazine met Bourgeois at Ferme St-Ours, one of the egg farms she co-owns with her husband Serge Lefebvre and her sister Chantal Bourgeois. Located along the Richelieu River, near the village of Saint-Ours (one hour east of Montreal), the farm is well known to local residents and campers who spend the summer on the riverbank. Every morning, they can purchase day-fresh eggs, selected off the conveyor belt from the henhouse.

The family business also includes farmland, most of it under organic certification (a few acres are in transition to organic), as well as an organic maple sugar shack.

In 2010, the three co-owners received the gold medal of the ‘Ordre national du mérite agricole du Quebec,’ the most prestigious award in Quebec agriculture. “My grandparents had received the same medal in 1951,” Bourgeois says. “Fifty-nine years later, it’s their granddaughters’ turn!”

No one would have predicted back then that the family dairy farm would become a flourishing poultry operation. Bourgeois remembers the times she would find her grandfather at the sugar shack after school or when she would fetch the cows from the pasture with her father.

“When I was 14, I already knew I wanted to work in agriculture. I asked my father to consider his daughters for a farm transfer.”

Because her parents were still too young to start a transfer to the next generation, Bourgeois completed a degree in agriculture at McGill University’s Macdonald Campus, became an agronomist and started working as a nutritionist for Shur-Gain.

In 1986, she was offered a position in poultry nutrition. “I decided to take up the challenge. I went to several training sessions and to many poultry conferences abroad, where there were very few women.”

Bourgeois worked with passion, setting up new feed programs and managing research projects, all the while holding on to her dream of having her own farm. In 1993, with her husband and her sister, a daring project was presented to her parents – converting the family’s dairy farm in a layer farm. “My parents were very open and they accepted!” Bourgeois says. “That’s how our farming adventure started!”

Ferme St-Ours has grown substantially since then, standing out of the crowd with its niche productions. Ferme des Patriotes is the largest organic egg operation in Canada. Recently, sunflowers were added to the crop rotation, for the production of organic sunflower oil, also used in salad dressing. “Sunflowers are so beautiful. People from the area really appreciated the view,” Bourgeois says.

Ferme St-Ours’ shop is open every morning, even Saturdays and Sundays. Customers may purchase fresh eggs, organic maple products and organic sunflower products. “This represents a very small part of our farm income, but we do it because we like it,” she says. “It’s important to have a contact with consumers and to inform them about today’s agriculture.”

Career in nutrition
Martine Bourgeois has kept her position as full-time manager of poultry nutrition and development with Shur-Gain for Quebec and the Atlantic provinces.

The goals for every feed program are always the same – improving bird health and feed efficiency, reducing environmental impacts and improving flock profitability.

Bourgeois works with nutritionists from other provinces, sometimes from other countries. With researchers from Nutreco (the company that owns Shur-Gain) in Spain and Netherlands, she has come up with ÉCOPONTE, a program recently introduced in Quebec. The amount of crude protein in the feed is diminished, but egg production is maintained. This allows for lower production costs and less nitrogen in the manure.

Despite a double workload at both the farm and Shur-Gain, Bourgeois has volunteered on a number of industry committees, such as AQINAC (feed industry association), CRAAQ (agricultural information centre) and the Quebec Order of Agronomists. She was also deeply involved in her children’s education.

With 30 years of experience, Bourgeois now realizes that the values taught by her parents, such as being open to the world, listening, working hard and following one’s dreams are extremely important. She now wishes to transmit her knowledge to her colleagues at Shur-Gain, to encourage them to build their own networks and fetch the most up-to-date information from wherever it may be found in the world.

There will always be a place on the farm for Bourgeois’ two daughters and sons, as well as her nephews, should they wish to come back after their studies and having gathered professional experience. All have worked on the farm and some still do.

“The door is open,” Bourgeois says. “We never know what the future holds.”