Less Does Not Mean More 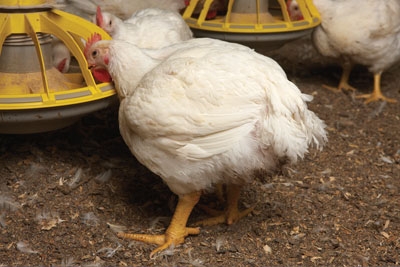 One of the most important aspects of raising broilers is keeping track of the protein content within your feed. Lowering the crude protein (CP) content of broiler diets may reduce feed cost and allow for the use of alternative feedstuffs (such as wheat and wheat by-products), but reducing dietary CP has been shown to reduce growth performance.1,2 In addition to reduced efficiency in growth, carcass composition becomes inferior in broilers fed diets in which CP has been lowered by more than three per cent, even when all known nutrient requirements are met.3-7 Nutritionists and producers should be aware of the implications of reducing the protein level below recommended levels. Reductions of broiler performance could have serious effects on the whole industry. For example, high fat levels in broiler chickens can be a problem for rotisseries as cooking trays overflow with fat, and poor flock uniformity is possible if an increasing proportion of the flock fails to achieve its growth potential, and this will affect efficiency in the processing plant.8,9

Because protein accounts for such a significant part of the total cost of feed and overall health of the animal, it affects many aspects of broiler performance and profitability. Therefore, our approach was to feed different energy and protein levels to broilers and evaluate their growth and processing characteristics as part of a large nutritional optimization study.10

The experiment
After 11 days, birds were fed metabolizable energy (ME) levels at 94, 97, or 100 per cent, as well as five levels of dietary balanced protein ranging from 85 to 115 per cent in 7.5 per cent increments of recommended protein levels based on the Cobb-Vantress recommendations for maximum growth rate and feed conversion ratio (FCR). Body weights and feed intakes were obtained weekly for 56 days, and carcass yield was measured biweekly from 28 to 56 days. The research evaluated the effects of three levels of energy and five levels of energy; however, the focus here is on the effects of reducing protein level in the diets of broilers.

Results
Our results show that reducing protein levels below the recommended levels could have deleterious effects on birds. At 42 days, reduction in protein levels significantly reduced body weight, as seen in Figure 1. At the same time, as the protein level in the feed increased, feed intake increased and FCR was reduced (Figure 2).

Of all the portions of the broiler carcass, the most highly valued is the breast muscle, which we found was highly influenced by the amount of protein present. By reducing protein levels, we observed up to four per cent reduction in breast yield (Figure 3). On the other hand, the abdominal fat pad increased up to 31 per cent when protein levels were reduced below recommended levels, as seen in Figure 4.

Farms are a business, and profitability depends on the cost of feed and the income generated from the sale of broilers, carcasses and/or portions. In this case, the cut-up scenario at 42 days is provided in Figure 5 (on page 24). Reducing protein at different levels of energy generally reduced profit, as shown by the curve patterns shows by 94 and 97 ME. The highest reduction in profit was found at 97 per cent level of recommended energy with 85 per cent of the recommended amount of protein.

The profitability of the 100 per cent ME, as seen in Figure 5, is much lower than both 94 and 97 ME until the protein value surpasses 105 per cent. This is due to the fact that the highest amount of ME results in a large increase of fat in the broilers, which can be seen in Figure 6, as seen on page 24.

Price versus profit
Reducing the protein level as much as 15 per cent below the recommended level could make feed less expensive but also reduces profitability, broiler performance, feed intake and feed conversion. n