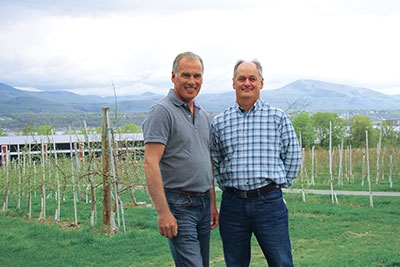 Careful debt management has allowed François (left) and Luc Turcotte to expand their operation at a rate that they can reasonably afford. André Dumont

It’s a dream setting for farming, with the St-Lawrence river down below, Mount Ste-Anne in the backdrop and a narrow country road lined with heritage homes and apple trees. Luc and François Turcotte know they are privileged to live and work on Orléans Island, the cradle of French-Canadian agriculture, minutes away from Quebec City.

Last year, the two brothers added their personal contribution to their island’s four-century-long farming history, when they reaped the first gold medal at the Concours de l’Ordre National du Mérite Agricole, the most prestigious agriculture award in Quebec.

The story of Ferme avicole Orléans began in the 1940s, when newlyweds Viateur and Rose Turcotte purchased a 1.5-hectare piece of land near the village of Sainte-Famille. To the 250 apple trees that were already standing, they added raspberries, strawberries and eggs in smaller quantities. A few years later, the couple settled for the best mix to make a good living off its small land base – chicken and apples.

In 1980, their son, Luc, finished studies in finance and business, and a company was founded to include him in the family farm. His brother François followed in 1984, after studying animal production.

During his studies, Luc turned his attention to the new marketing boards and quota production systems. His calculations showed farming under supply management could be a positive thing for his family.

“We still weren’t sure the prices would always cover our production costs, but we knew the system would bring us some security,” says Luc.

From the beginning of the 1980s, the farm was expanding. Quota was purchased and new henhouses were built, always with careful debt management.

“We have always worked very hard, limiting our debt and making sure we were able to pay,” says François.

Investing with great prudence allowed them to survive tough times without ceasing to grow.

“You have to remember the context,” says Luc. “There were 22 per cent interest rates and we were basically in an economic crisis. Then came free-trade talks with the U.S., along with a lot of uncertainty for the future of supply management.”

Uncertainty drove quota prices down, so Luc and François saw an opportunity and bought more. They calculated the risks and it turned out to be an excellent decision. Chicken consumption started growing and extra quota allocations to help meet consumer demand generated unexpected revenue.

Investments in production improvements are ongoing. “Before expanding, we maximize what we already have,” says François. Automating all the lighting, heating and ventilation controls improves both broiler and farmer well-being.

And all these improvements have a direct impact on the farm’s technical performances. ‘”When our chickens are well treated, it reflects on their growth performance,” Luc says.

“We are proud to provide good products to the consumer. We do everything to achieve top quality.”

The farm has one full-time and three part-time employees, with Luc’s son, Marc-Antoine, soon to become co-owner.

Luc is a board member of his local chapter of éleveurs de Volailles du Québec (poultry farmers’ union) and of the Coopérative des Horticuleurs de Québec (Old Port Farmers’ Market).

For the two brothers, there are no disadvantages to island farming – all agricultural services and slaughterhouses are only 90 minutes away.

“We are 20 minutes from Quebec City, in a protected historical district. We are able to show our neighbours and all the tourists that drive by that poultry production respects the environment and that farmers are good citizens,” adds Luc.