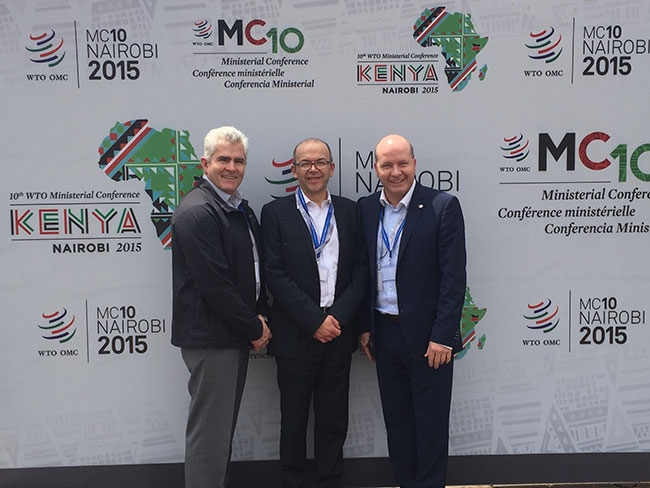 When you think about the connection between chickens and history you might think about how feed efficiency has increased or how birds have changed through genetic selection. But for Benoît Fontaine, his version of the connection of poultry to history goes a lot deeper than that.

Fontaine, a second-generation turkey and chicken producer, was at one point in his career a Canadian history teacher. For 10 years after graduating from the Université du Québec à Montréal in 1998, he taught high school, rising to become the principal for two years while still actively farming.

This Quebec poultry producer is now the chair of the Chicken Farmers of Canada (CFC), elected in November 2016, only the second chair to hail from La Belle Province.

Now, whether he’s at a poultry industry gathering or talking to politicians, he is able to connect by talking history and entertaining. As a history buff, he manages to find a local story to tell wherever he goes.

Youth on the farm

That green carpet is a long way from his farm where he grew up in St-Ignace de Stanbridge. Benoît’s chores after getting off the school bus included feeding and watering turkeys at their home farm, cultivating an appreciation of both birds and work involved with farming. His parents had been raising turkeys since 1970. Thus, when he later found himself with an empty barn and an opportunity to obtain quota it was an easy decision to go ahead.

When Fontaine stepped down from his teaching job he began farming full time. Ferme Avicole B. Fontaine Inc. is nestled in the winery region close to Lac Champlain, an area Fontaine claims is the warmest spot in Quebec. One farm in Notre-Dame de Stanbridge, that Fontaine purchased in 2005, sits so close to the American border that he can see the U.S. from his window; another farm, purchased in 2010, is in nearby Pike River.

With the help of seven employees he will produce 1.8 million chickens per year and one million kilograms of turkey in a total of eight three-storey barns. With no family of his own, Fontaine relies on one 24-year-old manager, Pascal Monnier, to look after the farm while he’s on the road. “He has his diploma in agriculture and has his own quota,” says Fontaine, who rests easy knowing that the farm is in good hands while he may spend up to 150 nights a year away from home as the CFC chair.

That may seem like a lot of time to spend on the road, but Fontaine does enjoy travelling. In addition to the CFC miles, this year he will visit Finland; last year it was Kenya for the World Trade Organization (WTO) Ministerial Conference, where he got to visit the house used in the filming of Out of Africa. Before that it was Hawaii on Trans Pacific Partnership (TPP) business, allowing him to visit Pearl Harbor, an experience that helped him to understand the involvement of the U.S. in World War II. “Everything is linked with history,” says Fontaine, who is already eyeing up retirement trips that will involve the study of human history.

Back at home Fontaine will talk to his parents, his mentors, Marcel Fontaine and Lucille Gagné, once a week. Their answers will guide him in questions of what to say or not to say or how to   manage the farm. As he humbly admits, “You cannot buy experience. I have some, but my father has more.”

The farm issues they both face have changed, with Fontaine listing animal welfare along with the new ways of rearing chickens, with the ‘new norms’ involving issues such as changing bird density or new water systems.

His rise through the ranks of industry boards began six months after he bought his first quota, starting with his local district, moving quickly through to first vice-chair, then provincially to second vice-chair in 2012. Fontaine has been heavily involved in the Union des producteurs agricoles since 1999 and has served on both CFC’s policy and production committees.

Now, as CFC chair, he knows he must remain neutral, speaking on behalf of all Canadians, not just Quebec. He also knows that policy discussions will always go down better with a good story. Fontaine’s command of the English language is already good but he continues to improve through taking courses. With his teaching background he brings communication and teamwork skills to his board positions; his two years as a school principal taught him leadership skills and how to bring forth new ideas with an open mind and an open ear.

At the national board level, he sees free trade as the number one issue. Fontaine points to 14 free trade agreements that have already been signed with 51 countries as proof that supply management is stronger than ever. “They haven’t touched supply management yet; even with the TPP we got a great deal. The government was listening to us.”

As he looks to the future he predicts the greatest challenge will be for chicken to remain a Canadian favourite with consumers. With Olympic enthusiasm, he says he wants poultry to remain on the top step of the podium. “Keep the flame burning; keep the love of Canadian products. As long as we stay there, we succeed.”