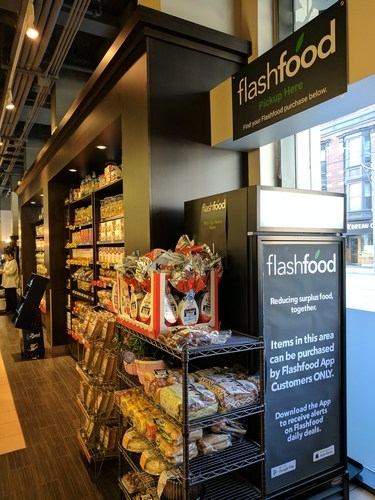 May 24, 2017, Toronto, Ont. – Flashfood, a mobile app allowing grocery locations to sell surplus food directly to consumers at a massive discount prior to discarding, has partnered with Longo’s in downtown Toronto for a 3-month beta to reduce their food waste.

Flashfood users see deals on perfectly good surplus food on their phone, usually with 3 days to a month until the best before date, at massively reduced prices.

Users get notified on their phone when new deals are available, pay through their phone, and pick their purchase up at the Flashfood zone in store – same day. Flashfood users then check out just like they normally would while at the store.

Flashfood launched in January with Farm Boy at their Beaverbook location in London, which is still running. Farm Boy has plans to add more stores with Flashfood in the next few weeks in London Ontario.

To date, if you annualized Flashfood’s top shoppers savings, they would have an additional $5k in the bank at year-end by using Flashfood.

A lot of people don’t realize this, but when food gets thrown out, it ends up in a landfill, gets covered by other garbage and rots without oxygen. This produces methane gas, which is a leading cause of climate change.

If International food waste were a country, it would be the third leading cause of GHG emissions behind the US and China.

In their partnership with Flashfood, Farm Boy and Longo’s have diverted over 1,500 meals from landfill – the equivalent GHG emissions to driving more than 1,800km.

‘We want to fundamentally change the way grocery chains are viewing their surplus food. Right now, perfectly good food is being thrown out well before the best before date. We’re providing our partners a profitable, seamless way to reduce the amount of food they discard while also making food more affordable for our users’ founder & CEO Josh Domingues.