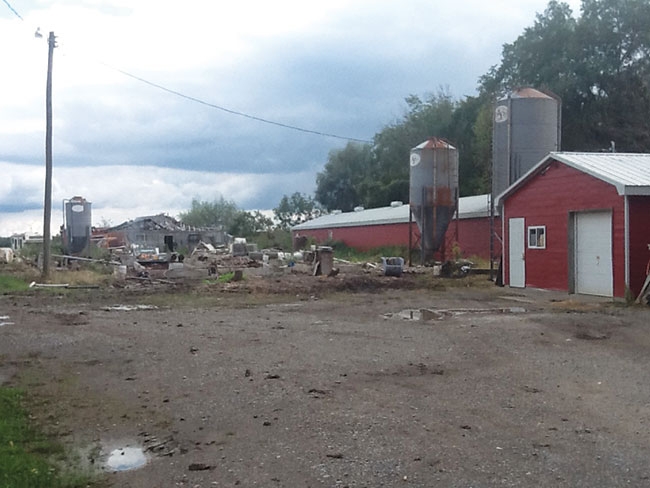 The site of our forthcoming enriched colonoy barn is presently being cleared. It was a farrow-to-finish swine operation that has been empty since 2013.

My name is Cindy Huitema and I’m a proud egg farmer from Haldimand County, Ont., situated between Dunnville and Cayuga. I grew up near Kitchener, Ont., on a mixed farm including 2,200 laying hens.

In 1997, my father decided to sell his quota. My husband Nick and I decided this would be a good opportunity to diversify. He had been pig farming for over two decades, but the industry had been unstable for many of those years.

So, we built a barn to house close to 5,000, but only put in one row of Farmer Automatic conventional housing units to fulfill the 2,200-quota allotment. The following year, in 1998, we purchased another 2,000 units. In 2004, we built a new cooler room, added on to the front of the barn and expanded again. In 2013, we added on to the rear of the barn, making room for 8,864 laying hens. We have always gathered by hand at the front of the barn on packing tables.

We have four children – Stephanie, 27, Nicole, 25, Charlotte, 22, and John, 20. Since they’ve all helped grow the business we had a family meeting last year to discuss whether there was interest in building a new barn and growing once again.

We also composed a wish list of various needs and features we would like to see in a new barn. All of us were set on having an enriched colony barn, as we did not wish to work in a free-run or free-range facility. After getting some quotes on various needs, we decided to wait until this year to begin. Completion is now set for next April.

When we had a rough idea of the various costs, I was shocked by the amount of money we’d have to spend. I found it to be a little scary that we would be in debt for a new housing facility. Also, waiting another year gave us more time to investigate barn particulars. We chose enriched housing because, while there is uncertainty as to where the demand for egg type will go in the future, we feel that this type of housing gives us more control when it comes to animal care and the amount of time we will spend in the barn.

Our journey to a new system began with looking at various companies’ systems at the London Poultry Show and the Outdoor Farm Show. We also toured enriched barns and asked many questions as to why things were done in certain ways both inside the barn and packing room and outside the barn and loading area for when the eggs are picked up.

We decided to use Farmer Automatic, as we had a good long standing relationship with them. What’s more, their head office is a half hour away, and we liked the various features in the enriched system. We also had to get financing in place prior to going too far with the project. We chose TD Canada Trust based on good references from other farmers and my past relationship with them. We have an existing farrow-to-finish pig barn that we thought we could take down, using the foundation for the new chicken barn. We had an architectural engineer investigate this to be sure this was a feasible possibility. They confirmed that it was, indeed, doable.

One of the major things you have to have first in Ontario is a nutrient management strategy, and we applied for this last March. According to the Ontario Ministry of Agriculture, Food and Rural Affairs (OMAFRA), it is supposed to take 30 days to get this, but we were warned of a backlog and to expect three to four months. We got the nutrient management pass in August, and could then apply for a building permit.

In their free time, Nick and his hired man have been dismantling the old barn to prepare for breaking ground for the new building in late September. We are still at the clearing of the site stage, but have made a lot of progress.

I hope that by documenting this process in my new blog on canadianpoultrymag.com, it will help others who are deciding what to do with their future hen housing.

CLICK HERE  to read more about Cindy’s experience transitioning from a conventional to an enriched layer barn.