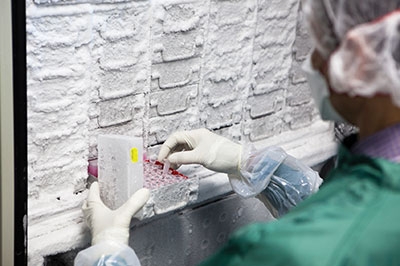 In 1946, there were about 300 Canadian commercial chicken breeders, and most or all Canadian research institutions conducting poultry research maintained their own genetic lines.  By the 1980s there were only two primary breeders based in Canada – Shaver and Hybrid – as well as 13 middle-level breeders of chickens, turkeys, and waterfowl, and 119 populations kept in 11 research institutions.

Today, two breeders dominate the international market for layers, broilers (90 per cent) and turkeys.  As well, there are hardly any middle-level breeders left in Canada, and until recently, five Canadian institutions conducting agricultural research kept 38 populations of chickens and Japanese quail.

The Pacific Agri-Food Research Centre in Agassiz, B.C,, has recently terminated its poultry unit, including nine lines of chickens and nine lines of Japanese quail.

It is clear that avian researchers and the poultry industry have experienced a massive loss of genetic resources. Maintaining live flocks is impractical and very costly, and economical methods of preserving poultry genetics for future use are badly needed, as genetic resources continue to narrow.

In the recent past, the only effective method of conserving poultry germplasm has been in living animals. Alternative options have been attempted over the years, but results have not been very promising. Fertility obtained from cryopreserved chicken semen is unpredictable and the structure of the avian egg prevents its cryopreservation. Embryonic cells can be stored and used to generate germline chimeras (organisms with a mixture of cells from different embryos), but this requires complex procedures and results in very low efficiency. Over the past century, chicken ovarian transplantation has been attempted with limited success.

Successful development of techniques for cryopreservation and transplantation of ovaries and testicles of birds can provide the means of maintaining the genetic variation needed for full differentiation of markets for poultry meat and eggs. Dr. Fred Silversides, formerly of Agriculture and Agri-Food Canada, together with Drs. Yonghong Song (Dubai), Jianan Liu (USDA post-doctoral research fellow) and Kim Cheng (UBC), has been working on optimizing cryopreservation and transplantation of avian gonadal tissue.

The first step in this research, which was Dr. Jianan Liu’s PhD project, was aimed at simplifying the storage process for cryopreserved genetic material by using vitrification, which converts liquid to a glass-like substance instead of ice crystals, and has several advantages over slow-freezing procedures in preserving tissue.

A vitrification protocol was developed to preserve Japanese quail ovarian and testicular tissue, using cryoprotective agents and acupuncture needles to facilitate tissue handling. Rather than using cryovials typically used for cryopreservation, a simpler straw system was tested and found to be an ideal storage medium, as it has the advantage of fitting into existing systems for storage and transport.

Also, because gonadal transplantation is critical to functional recovery of cryopreserved tissue but can be limited by tissue rejection, the researchers used thymic tissue to improve the efficiency of immunological acceptance. Donor thymic tissue was implanted into recipient embryos, and gonadal tissue from the same donor was transplanted under the skin to the recipient after hatching. Transplant viability and histology were also examined.

It was found that thymic implantation might improve survival of gonadal transplants from chicken to chicken, but not transplants from quail to chickens. Investigations into avian ovarian transplantation led to intriguing additional observations: donor-derived offspring were produced from transplanted adult quail ovarian tissue, although delayed age at first egg and reduced reproductive longevity were observed with the transplants. As well, offspring with chimeric plumage coloration were produced from cryopreserved and transplanted chicken ovarian tissue, indicating chimeric folliculogenesis.

This project provides a successful model of cryobanking avian gonadal tissue using a simple vitrification method and suggests future directions in improving transplantation tolerance and using gonadal transplantation in avian research. This is good news for the poultry industry, as cryobanking of germplasm is both economical and ensures availability of genetic resources for years to come. To read more about this research project, please visit www.poultryindustrycouncil.ca.

The American Egg Board Research Award is given to increase the interest in research pertaining to egg science technology or marketing that has a bearing on egg or spent hen utilization. The award is given to an author for a manuscript published in Poultry Science or The Journal of Applied Poultry Research during the preceding year.