Will they pay? Consumers polled on alternative housing systems 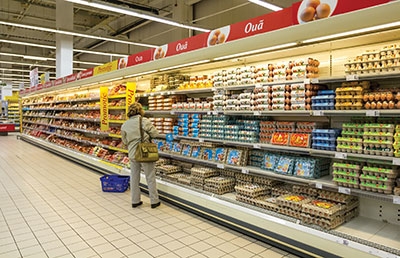 Consumer acceptance and willingness to pay for eggs from enhanced animal welfare production systems is still poorly understood in Canada, so UofG researchers developed a project to gain more understanding

Increasing consumer awareness of animal welfare issues is impacting how eggs are produced and marketed. Some jurisdictions have passed legislation prohibiting the use of conventional cages and requiring that hens be housed in alternative systems, while a growing number of food retailers and manufacturers require eggs they sell/use to come from alternative housing systems.

For this reason, Yiqing Lu, former MSc. student in the Department of Food, Agricultural & Resource Economics and advisors Dr. John Cranfield and Tina Widowski developed a project seeking to generate new economic knowledge that helps to inform industry stakeholders regarding consumer acceptance and valuation of eggs from enhanced animal welfare production systems, and the potential size of the market for such eggs.

The effect of information on consumers’ purchase behaviour towards eggs from enhanced animal welfare production systems was also investigated by including two information treatments in each choice experiment. In treatment 1, a description of the housing systems from whence the eggs came was provided. In treatment 2, the same information was provided, plus additional, scientifically based information regarding the consequences of each housing system on: hens’ health, hens’ ability to exhibit natural behaviours, affective states; and the impact of housing systems on environment. Structured this way, the two information treatments will reveal whether scientifically valid information affects consumer WTP, and if so, how. Note that WTP is not the price for the product, but rather the premium associated with that attribute.

An on-line survey was undertaken, using Ipsos’ i-Say on-line panel. The sample was representative of the Canadian population in terms of demographic characteristics. Respondents were generally concerned about animal welfare, but did not consider animal welfare among the top issues when purchasing food. Of the three aspects of animal welfare, namely basic health and functioning, natural behaviour, and affective states, “basic health and functioning” was viewed as most important. Respondents’ knowledge of animal production was limited, and they believed that scientific evidence, rather than ethical or moral considerations, should be used to determine how farm animals are treated.

Consequently, it is concluded that information on the consequences of each housing systems on hen health and welfare reduces consumer valuation of eggs from free-run and free-range systems (and their valuation of the absence of cages generally).

Although consumers have limited knowledge about animal production system and animal welfare, they are sensitive to information about housing systems. It is important for egg producers to communicate well with consumers. Providing detailed information about the consequences of the housing systems on hen health and welfare reduces consumer valuation of eggs from free-run and free-range. And while respondents value the absence of cages (or discount eggs from systems that use cages), this value is also reduced when information on the consequences of the system on hen health and welfare is presented to subjects. An important lesson from this is that use of the word cage (e.g. enriched cages) should be avoided lest the price consumers would pay will be reduced.

Related
Will They Pay?
From the Poultry Editor: May 2014
PIC Update – January 2014
From the editor: October 2015
Editors’ Picks
Digital Edition