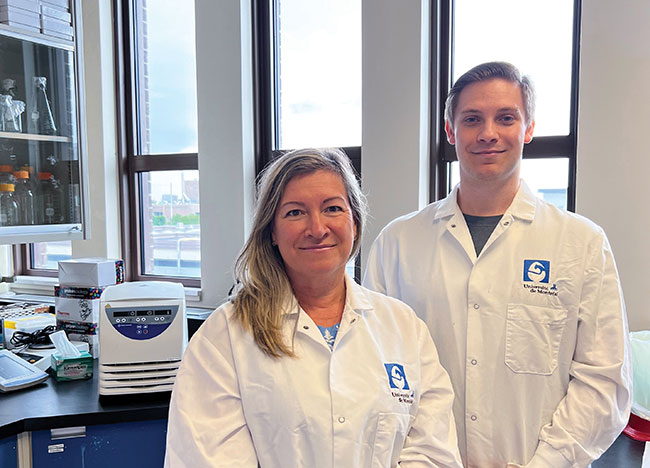 Canadian broiler farmers need to be on guard against necrotic enteritis (NE), a devastating poultry disease that can wipe out a young flock. It’s a threat they traditionally manage with the use of preventative antibiotics — a practice the industry has committed to ending in the near future, in its continued commitment to reduce antibiotics. Preventative use of category I and II antibiotics has already been banned since 2014 and 2018, respectively.

Dr. Martine Boulianne, poultry research chair, Faculty of Veterinary Medicine of the University of Montreal, is leading a research team to develop a vaccine against NE, by first understanding various strains of Clostridium perfringens, the naturally occurring bacteria that leads to the disease. This fall, her research partners at the University of Calgary will use Boulianne’s work to develop in ovo vaccines using genes of interest her team has identified.

“The key to vaccine efficacy is to understand the exact mechanisms of the pathogen,” Boulianne says. “When and how does it attach itself, and when does it start to produce the toxins that are so deadly?”

Seven hours from administration to lesions
C. perfringens is part of the normal microbiota of chickens, but with thousands of strains, not all of them lead to NE. “Often if you’ve had a case of NE on the farm, it will re-occur if you have a pathogenic strain as well as the presence of risk factors,” says Boulianne. “C. perfringens strains persist for years in their environment – we even find it in the cracks on a floor.”

But she says even if a pathogenic strain is present on a farm, producers who are extra diligent at eliminating risk factors may be able to prevent the pathogen from multiplying in the bird’s gut. Among the mitigation practices, producers would need to maintain good control of coccidiosis outbreaks, and pay particular attention to feed – ensuring it is not too high in protein and easily digestible.

Using an experimental model with adequate risk factors and the right C. perfringens strain, Boulianne says it takes as little as seven hours for NE to set in, creating telltale intestinal lesions that ultimately lead to poor growth or death in young birds.

Not all bacteria strains are created equal
As part of the research project, Boulianne’s team categorized a total of 79 C. perfringens strains from different geographical regions, and from healthy and diseased poultry birds. They tested each strain in repeated models to determine whether it was pathogenic (harmful, leading to the development of lesions) or commensal (not harmful).

“Deciding what is pathogenic and what is commensal – and then cracking the genetic code – is essential to compare both types of strains. It is only then that you can find out which genes are different and involved in the pathogenicity,” Boulianne says.

By taking this approach, she notes the team has made discoveries that open up a new understanding of C. perfringens. A gene that the scientific community knows as “netB” is largely considered to be the signature for pathogenic strains — but Boulianne’s team proved that wasn’t necessarily true.

“Our analysis showed some strains that are netB positive that don’t cause lesions, and others that will. We also found some netB negative strains that created lesions in our models. It opens the door to finding another gene of virulence,” she says.

“If we want to make a vaccine, we need to consider the first thing the bird comes into contact with on the bacteria — the bacterial surface,” says Boulianne. “If the genes are located in the cytoplasm, inside of the bacteria, it won’t stimulate the immune system the way we need.”

Next steps
After identifying 10 genes of interest, the team is generating protein from each gene, to be used in the next step of the project – delivering proteins in ovo to test whether they generate an immune response. When that work is done, Boulianne hopes to challenge birds from inoculated eggs with an NE infectious model in early 2023.

“We are starting to see some resistance to the antibiotics we currently use to control NE, and there’s no way of knowing how long the in-feed antibiotics will be effective,” says Boulianne. “If we want to remove the use of category III antibiotics, we need to plan for the future, and that means controlling NE with as many tools as possible.”

Boulianne is working closely on this project with Drs. Joshua Gong and Dion Lepp at Agriculture and Agri-Food Canada, Dr. Faizal Careem at the University of Calgary, and her University of Montreal PhD student Nicolas Deslaurier.

This research was funded by the Canadian Poultry Research Council as part of the Poultry Science Cluster, which is supported by Agriculture and Agri-Food Canada (AAFC) as part of the Canadian Agricultural Partnership (CAP) program. Additional support was received from the Natural Sciences and Engineering Research Council of Canada (NSERC) and the Claire and Jean-Pierre Léger Foundation.