Intestinal health – these two words are presenting a big hope in modern
animal production. Today, it seems as though intestinal health is the
key to solving a lot of existing as well as future problems that will
occur due to new legislative requirements and consumer pressures, such
as reducing or eliminating antibiotic use. 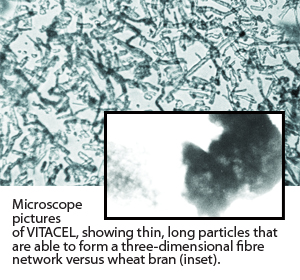 Intestinal health – these two words are presenting a big hope in modern animal production. Today, it seems as though intestinal health is the key to solving a lot of existing as well as future problems that will occur due to new legislative requirements and consumer pressures, such as reducing or eliminating antibiotic use.

We are educated by advertisements of market-leading yogurt manufacturers, who propose that good intestinal health makes us more resistant to diseases. These health claims also belong to animal nutrition.

With little doubt, it can be believed that the same ingredients used in human nutrition must be good for our animals. Intensive discussion surrounding the use of probiotics and prebiotics as feed ingredients is a direct result of this belief.

Influence of Fibre
Like probiotics and prebiotics, fibre influences the intestinal microflora, and consequently intestinal health. But, not all fibres are alike, and not all of them have positive effects on animal performance.

Most fibre sources used in animal nutrition are byproducts of the food manufacturing industry.  These can be locally sourced and they reduce costs, but the fibre content can vary dramatically.

They can also contain unwanted substances that hinder animal health and performance, such as mycotoxins.

Types of Fibre
Crude fibre includes all the insoluble, structure-building components (cell walls) of plant material. This is mainly cellulose, insoluble hemi-cellulose as well as lignin.

Because they are insoluble, crude fibres are not (or only slightly) fermented within the intestinal tract and are also responsible for the “mechanic” fibre work – bulking effect and stimulation of the gastrointestinal tract.

Raw fibre, such as that found in byproducts, is comprised of both insoluble and soluble fibre. However, it is difficult to determine which type and concentration of each of fibre is present in feed ingredients. This is important because soluble fibres can negatively impact performance, causing reduced nutrient digestibility, while insoluble fibre can be beneficial, reducing feather picking and helping create more solid droppings.

In order to compensate for this, the German company J. Rettenmaier & Söhne (JRS),  developed a new basic raw fibre material,  known as raw fibre concentrate (RFC).   This concentrate is marketed in Europe as VITACEL® R 200 (see box) and has demonstrated an ability to increase nutrient digestibility.

Research Results
Studies were carried out at the University of Mexico City to investigate the effect of the raw fibre concentrate on the development of the intestinal villi.  Most clear results were achieved in the duodenum – the first part of the intestine in which most of the digestive enzymes are produced. The analysis showed not only a clear tendency but also significantly longer intestinal villus in the VITACEL group.

The major portion of finest fibres are stimulating the blood flow inside the intestinal villi, allowing better digestibility of nutrients.

As an additional effect, the fibre network cares for a certain “drainage” effect in the colon – thus the water is removed more easily in the colon, while feces are drier. Furthermore the water stays inside the bird, which should help nicely against heat stress.

Feeding Trials
To prove the influences of VITACEL R 200 on animal performances and slaughter results, several feeding trials were performed utilizing more than 100,000 Ross and Cobb broilers (refer to Table 1).   The fattening of the male broiler took place in the poultry stable of the Academy of Technology and Agriculture in Bydgoszcz, Poland. A control group without the application of VITACEL R 200 and an experimental group with the addition of VITACEL R 200 were fed.

The feeding of the broilers was divided into three phases. 0.3 % VITACEL R 200 was included in the starter, 0.4 % VITACEL R 200 in the grower and 0.5 % VITACEL R 200 in the finisher. The decrease of both the energy and the protein content in the test feed was compensated by a slightly increased content of soy oil (+0.2 %) and soy meal (+0.2 %). Thus the feed rations of the control and experimental groups were identical concerning its energy and protein content.
The higher weight can be explained by higher intestinal villi and thus better digestibility. The lower mortality is most likely caused by the drier litter and thus more stable climate.

Slaughter Results
Additional evidence of VITACEL promoting better digestibility, especially of protein, is based on slaughter results observed in the Netherlands – here a strongly improved amount of precious parts (breast and leg muscle) could be observed (refer to Table 1).

Canadian Trials
On-farm trials for VITACEL R 200 will commence in August 2007.  The product will be distributed by L. V. Lomas Limited.

From European and Mexican studies, VITACEL R 200 seems to be an ingredient that can increase performance and safety in poultry production at the same time.

Due to its strong effect on litter quality, the product seems to be especially well- suited for extreme conditions like high heat and/ or humidity in the barn where normally only reductions in the amount of birds per square meter help to prevent extraordinary big losses.