Egg farmers across Canada are giving back to their communities 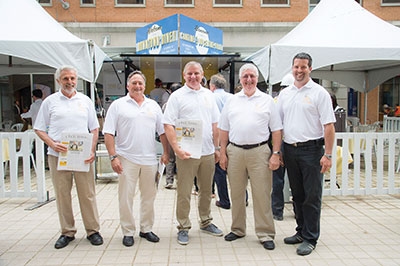 Geneve Newcombe and her husband Craig, egg farmers in Port Williams, Nova Scotia, feel strongly about teaching their children about the value of giving back to the community.

So when Geneve heard that Egg Farmers of Canada was a sponsor of the Canadian Breast Cancer Foundation CIBC Run for the Cure, she didn’t hesitate: she and her three children, all in their late teens and early 20s, signed up to take part in the run in Halifax.

The family has done the run twice now — happy to do something for others, and pleased that Egg Farmers of Canada is a sponsor of the event.

Tradition of Agriculture
“I believe that social responsibility is rooted in our traditions as an agricultural industry,” says Peter Clarke, chairman of Egg Farmers of Canada. “When egg farmers came together in the 1970s to develop a self-regulating supply management system, they were demonstrating a willingness to work together for the common good of consumers and farmers. They also understood there was a need to earn the trust of their stakeholders by operating in a socially responsible manner.

Research has confirmed this. Through donations, fundraising, sponsorship, volunteering and taking part in events, nine out of ten farmers are giving back. Across the country, they are strong contributors to their communities.

Deep Roots
“Because most egg farms in Canada are family-owned and have often been operating through several generations, our farmers are deeply rooted in and committed to giving back to their communities,” adds Peter Clarke.

Egg boards are also strong community supporters. Egg boards and EFC contribute more than $1 million a year to causes through donations, fundraising and sponsorship of community events and organizations. Collectively, they support close to 200 community programs, causes, charities and events.

EFC has been collaborating with Food Banks Canada for more than two decades, and over the years it has donated millions of eggs to the organization — more than one million last year alone.

At one of its recent events in Ottawa, Egg Farmers of Canada hosted a successful Downtown Diner near Parliament Hill. EFC served egg sandwiches created by Marc Doiron, a chef and owner of the local restaurant Town, to parliamentarians, their staff and the public; in return, the organization encouraged donations to Food Banks Canada and added their own donation. As a result EFC was able to present Food Banks Canada with a $10,000 cheque.

Earlier this year, Egg Farmers of Canada announced a new partnership with Breakfast Club of Canada, an organization that gives children access to a nourishing breakfast.

Supply Management
Geneve Newcombe says the system of supply management is part of the underpinning of egg farmers’ commitment to their community. By giving egg farmers an income they can count on, the system brings stability to the industry and enables farmers to think about more than just the future of their farm.