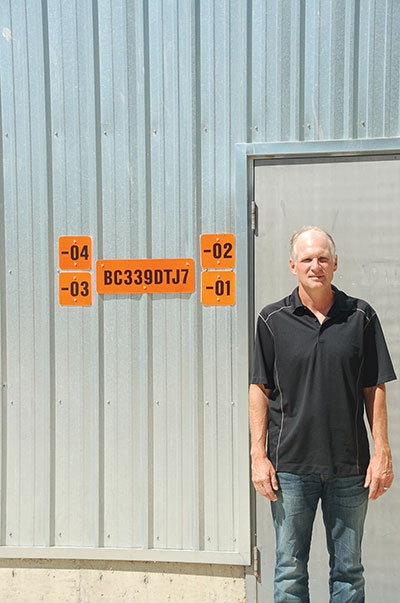 In B.C., each building that houses poultry has an identification number. David Schmidt

Unlike the rest of the country, where adoption of biosecurity protocols is voluntary, British Columbia’s poultry biosecurity program is mandatory for all commercial table egg, hatching egg, chicken and turkey producers in the province.

B.C.’s four poultry marketing boards and commissions used their regulatory authority to make the industry-developed biosecurity program mandatory, but received little negative reaction because producers were keenly aware of the economic and mental devastation caused by the avian influenza (AI) outbreak in the Fraser Valley in 2004. That outbreak shut down an entire industry and led to the depopulation of about 18 million birds.

A chicken, turkey and egg producer with multiple farms, Nickel felt the trauma personally as his layer farm was one of the infected flocks. Although the farm was outside the five-kilometre zone established around the initial infected farm, “we were in line with the wind currents.”

At the time, it was believed the AI virus was too heavy to be airborne, but Nickel’s experience suggested that it could move with the wind. The 2004 situation was exacerbated by a complete lack of biosecurity protocols: few farms had gates, workers wore no special clothing, there were no visitor logs, no protocols for service staff and few restrictions on human and vehicle movement among farms.

Although it took only “a few days” to depopulate the 60,000 birds in Nickel’s barn, it took two crews working full time a month to do the cleaning and disinfecting (C&D) the Canadian Food Inspection Agency, required.

Since the industry could not restart until all the infected barns had been cleaned and disinfected, “much longer” was not an option. To ensure the C&D was done at full speed, industry picked up the C&D costs for the infected barns (including Nickel’s).

For Nickel, the C&D was complicated by the fact that his 1960s-era barn used a post-and-beam design with raised floors.

“We have changed the way we plan, build and retool our barns based on what happened in 2004,” he says, noting it took “less than a week” to hot wash his new 30,000-bird layer barn.

In what has become common practice in B.C., Nickel now uses a manure belt system with exterior manure storage in his layer barns (which makes cleaning easier) and cleans all his short-cycle barns, both broilers and turkeys, after every cycle.

One of the greatest benefits of B.C.’s mandatory biosecurity program is that it ensures that “everyone’s doing the same thing.” Important elements include managing access points (gates or other methods to limit site entry and anterooms at entries to bird holding areas), tracking (each building housing poultry has an identification number and each individual bird holding area within that barn has a subsidiary number) and surveillance (all farms except broilers are sampled regularly).

The IDs are linked to a database, which includes complete contact information for each premise and can be accessed by any of the marketing boards, the B.C. Ministry of Agriculture (BCMA) and/or the CFIA. The BCMA animal health centre in Abbotsford has also been upgraded since 2004 and is now one of only two laboratories in Canada accredited as a full-service (Level 3) veterinary diagnostic lab. If a disease is suspected, it can be typed very quickly so that officials quickly know what they’re dealing with.

On Nickel’s own farms, his biosecurity measures include wearing separate boots and coveralls or smocks in each barn and limiting staff travel between farms.

In addition to developing biosecurity protocols for their farms, producers developed protocols for the feed companies, equipment dealers, catching crews and other service sectors. Since marketing boards have no enforcement authority over allied trades, it is up to producers to ensure the protocols are being followed. While initially reluctant, the allied trades have become much more compliant in recent years.

As an example, catching crews are much more vigilant because they “don’t want to be affected,” Nickel says, noting several crews went out of business as a result of the 2004 outbreak.

To make the program work, producers have agreed to open disclosure within the industry. “If you don’t have that, you’re operating in darkness,” Nickel stresses, “you can’t have confidentiality if you have a disease threat which could affect the entire industry.”

As well, an emergency protocol and an incident command structure have been developed, with three people, including both producers and marketing board staff, available round-the-clock.

Although it was formed as a response to the AI outbreak, the structure is being used to manage outbreaks of federally and provincially reportable diseases, in addition to even non-reportable diseases. Although group members may change, whoever is atop the command structure at the time of an outbreak takes control, regardless of where it occurs. If the lead is a chicken board staff member, he or she is in charge even if the outbreak occurred in turkeys or table eggs and affects only that sector.

As soon as an outbreak is identified, the entire industry is immediately notified not only of the disease but exactly where it is. Nickel recently had an infectious laryngotracheitis (ILT) outbreak in one of his broiler flocks. Because his is a double barn with two floors in each barn and each floor has a separate ID number, he was able to specify exactly which of the four flocks was infected.

“Since the other three flocks tested negative, I was able to ship them as normal,” he notes.

The system has proved its efficacy several times since its inception. For example, when routine surveillance uncovered instances of low path AI on a local duck and goose farm, surrounding farms were immediately alerted and took heightened action to protect their farms. As a result, the industry carried on without little or no interruption.

When a case of low-path AI was detected at a turkey farm in 2009, almost no one outside the industry was even aware of it. All farms within the three-kilometre zone were immediately tested and the appropriate permits obtained to ensure they could carry on business as usual.

However, unlike the 2004 outbreak, those farms had to absorb the cost of C&D themselves.

“Because we had a system in place, we didn’t have to shut down the entire industry. That took the pressure off to get those farms cleaned up as quickly as possible. Not having to do C&D in a panic also meant the farms could go about it in the most cost-effective way for them,” Nickel says.

Although the marketing boards are actively involved in the program, Nickel stresses producers must not rely on them to manage biosecurity.

“Producers and their associations need to take responsibility for what’s taking place on the ground.”