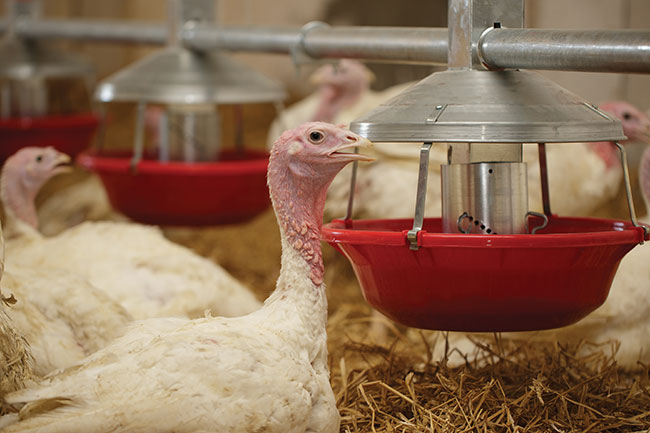 Adding trace mineral complexes to poultry diets is simple, as they can be included through premixes. PHOTO CREDIT: Zinpro Corporation.

Research shows that trace minerals can play a crucial role in setting young turkeys up for a healthy, productive life.

The starter phase is a stressful one for poults – they’re growing rapidly while also dealing with environmental stressors and challenges to their immune systems. And that’s where trace minerals like zinc, copper and manganese can make a difference in their long-term health and productivity, according to Dr. Leonardo Linares, global poultry nutritionist with Zinpro Corporation.

He spoke at the Midwest Poultry Show this year about how trace minerals improve performance and bone health in turkeys. He also discussed how supplementing trace minerals from amino acid complexes can positively impact bird efficiency and welfare.

Faster-growing birds have more bone problems
The change in turkey growth over the past almost 60 years has had a significant impact on the birds’ skeletal development, Linares noted, which has led to an increase in bone health issues.

“They (the birds) are three times heavier than they were 60 years ago. They lean more upfront, as the breast is heavier, putting pressure on the femur,” he explained. “After 14 to 16 weeks of age, femur fracture is becoming more common, so you lose all the investment you have put into the turkey.”

Positive impacts of trace mineral supplementation
Most recently, Linares completed two studies looking at turkey performance when birds are fed trace minerals. Zinc, manganese and copper trace minerals from both amino acid complexes and inorganic sources were fed to breeder hens and then to their offspring in the starter phase.

“The bones of poults fed sulphates and not given performance minerals have wider growth plates, so more chance to develop lameness,” he said.

Even if only the breeders or the poults were fed trace mineral complexes, the outcome would still result in homogenous growth and a lower risk of mobility issues.

Overall, the research showed that if producers supplement breeder rations with zinc, manganese and copper complex-derived trace minerals, their offspring will have both better bone health and feed conversion.

At the same time, noted Linares, if those same trace mineral complexes are added to poults’ diets, their performance and feed conversion improved by four to seven points, with a positive 2.2 to 1 return on investment over sulphates until the birds hit 13 weeks of age.

Applying research outcomes in the barn
Linares says it is important for producers to pay attention to skeleton development and to adjust turkey diets to avoid structural problems with leg bones as the birds mature and gain weight.

That means balanced nutrition that includes calcium and phosphorus, vitamin D3 and trace minerals like zinc, copper and manganese to support the healthy development of bones as well as tendons and cartilage.

“The recommendation is for a partial replacement of the inorganic trace minerals with 40 ppm of zinc, 40 ppm of manganese and 7 ppm of copper from amino acid complexed metals,” he added. “This is essential to increase absorption rates of these vital elements to support formation and maintenance of the skeleton and avoid important losses on performance and mortality due to leg issues.”

Adding trace mineral complexes to poultry diets is relatively simple. That’s because they can be included through premixes either at the feed mill or on-farm for producers mixing their own rations. The key is to ensure the correct minerals are added in the proper amounts to avoid deficiency or toxicity problems, Linares cautioned.

Partially replacing inorganic mineral sources with amino acid complexed trace minerals will come with added costs, but that will be offset by better bird performance. Linares estimated that better feed conversion ratios, less lameness and fewer late-life mortalities due to leg issues are expected to offer producers a minimum two to one return on investment.

“With genetic improvements, we have seen big increases in performance but also decreases in welfare traits in birds, leading to issues with bones. You can get improvements on progeny skeletal development if you feed the breeders with trace minerals,” he concluded.

“There is benefit on performance and welfare improvement and there is economic support for producers on the return on investment when you feed both breeders and birds in the grow-out phase.”

A turkey’s weight at 20 weeks of age: