Features Producers
The Brightside of innovation 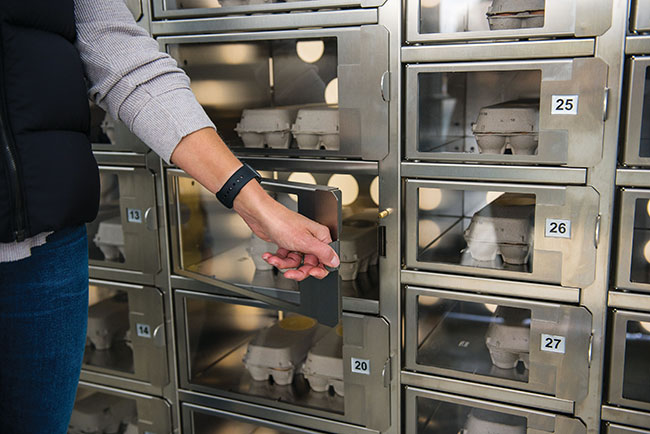 The egg vending machine, made by Roesler Vending from Germany, is fully automated and configurable to expand capacity.

Most people stop in at Brightside Poultry, an egg farm on a busy B.C. highway, to buy eggs. And while they might marvel at being able to buy those eggs from a fully automated vending machine using their credit card, they’re likely unaware of the many other innovations that are also part of Richard and Jacqueline Boer’s layer farm.

The Chilliwack-based producers call their entry into the egg business a happy accident. Jacqueline is the third generation on her family’s dairy farm, where both she and Richard are still actively involved. In 2013, they won the new entrant broiler quota lottery, which was their start into the poultry industry – and when some layer quota came available in 2016, they jumped at the chance to expand their business yet again.

“When we won the new entrant lottery, we didn’t know anything about chicken farming – when they dropped our first flock, I had never held a chicken before,” says Richard, whose main responsibility is day to day management of the dairy and poultry farms. “But it was a way to diversify into another supply managed commodity and, since we know the basics of supply management, it seemed a pretty safe investment.”

“We are raising generation four – we have four kids and my brothers have kids, so this was a good business for another income stream,” adds Jacqueline, who handles business development, corporate finance and marketing. “Broilers weren’t a primary income source, so when some layer quota came for sale, we jumped at the chance. Animal care and husbandry is a passion of ours as a family so another business with livestock seemed like a good fit.”

New entrants
The Boers started with 4,000 free-range laying hens in 2017 and have rapidly doubled their flock to around 8,000 birds since then, transitioning into organic production in the process. They built new layer and pullet barns in 2019, giving them room for up to 16,000 birds, and added the egg vending machine so they could manage the whole process from chick to table egg.

“From an animal health standpoint, it was important to start the birds and see them through their entire life cycle – being in animal agriculture for a long time, we know that proper nutrition and husbandry is so important,” Jacqueline says.

Before building their state-of-the-art new barns, the Boers went to Europe in the fall of 2018, taking in the large Eurotier trade show in Germany and visiting farms there and in the Netherlands with equipment supplier Big Dutchman to see their systems in action. Their goal was to ensure long-term profitability and the highest animal care standards.

“We spent a lot of time researching equipment and making sure we are confident in what we bought,” she adds.

Brightside Poultry’s Richard and Jacqueline Boer are egg and broiler farmers who’ve kept ahead of the innovation curve from the beginning of their poultry careers.

First layer barn
Their first layer barn was a free-run facility that they had to renovate to meet the increased space requirements demanded by their transition to organic production; that original barn has since been converted for broiler production.

“We wanted equipment that was easy to maintain and keep clean, and a barn where our birds would have the best climate available,” Richard says. “Everything we did was first and foremost about the birds and how they would act.”

The Boers installed a Big Dutchman aviary system to accommodate the needs of their cage-free organic production, one that distributor Tyler deBoer (no relation) of AgPro West Supply Ltd. says is designed for both bird and people comfort.

“It’s one of the lowest systems, with steps and perches that are easy to get up on to see the birds and manage them,” he says. “The Boers adopted things they saw in Europe – they really wanted to be ahead of the curve.”

Brightside’s barns include a Skov ventilation system that was designed by engineers in Denmark based on local B.C. weather patterns and climate data. In the summer, the barn’s air is completely exchanged every 30 seconds.

The windows and doors are by Scan-Air, built specifically for livestock use; the windows have their own built-in dark-out features that make it possible to control interior light directly with the windows.

“We live on a road that has 33,000 cars pass by the farm a day, so we are always looking for a way to capitalize on that traffic and make use of our location to get product to consumers,” says Jacqueline, adding dairy wasn’t an option because of the level of processing required.

Their on-farm vending machine is located inside a temperature-controlled building they call the Egg Shack. Customers walk in, select what they want, tap a card to pay and take the product out of the machine. Eggs sell for $7.00 a dozen, which is competitive with other free-range organic egg prices in the area, and are restocked in the machine once or twice a day.

According to deBoer, the unit itself ranges in price from $15,000 to $30,000 depending on size, and is fully configurable with modules that can be added to expand capacity.

It can also accommodate other products like fruit, vegetables, honey or preserves, but at the moment, Brightside is sticking solely to egg sales.

“Feedback from customers as been great; they’re used to self-checkout technology and are happy to have something so fresh, so we are excited about the potential this has,” Jacqueline says.

It also takes advantage of a growing trend towards direct sales to consumers who are interested in knowing where their food comes from and how livestock is raised. According to the Boers, it’s an ideal technology for farmers in highly populated areas to get product directly to consumers without needing a traditional retail set up.

The producers’ next goal is to ramp up layer production to fill their barn’s capacity; after that, they say, the sky’s the limit.

“If you had asked us four years ago if we would be layer farmers, we would have said no,” he says.

Learning to lead
Every year, Egg Farmers of Canada (EFC) brings a cohort of young egg farmers with an interest in the future of the industry together as part of its national young farmer program. The goal is to teach them about the egg industry provincially, nationally and internationally while fostering their leadership skills and letting them build networks in the industry.

As someone who doesn’t come from an egg farming background, Richard found the program a great way to learn about the sector as he and Jacqueline started building their free-range organic egg farm.

His experience included trips to EFC’s annual meeting in Ottawa, the National Young Farmers’ Forum in Toronto and the EFC summer meeting in Yellowknife.

“It was a great program. You end up forming a network of friends across the country while learning how EFC works at the national and international level, how they protect our supply managed system and how quota is allocated,” he says.

An unexpected added bonus was meeting a couple having trouble finding an organic aviary pullet grower in their home province of Saskatchewan; Boer now grows their pullets for them in B.C.

As part of the program’s fifth anniversary, Boer was also one of four grads to travel to Africa to visit EFC’s Project Caanan in eSwatini (formerly Swaziland).

“It was a pretty awesome experience to be able to go into the community there and deliver eggs,” he says.

Related
Nobody does it better
From the editor: Poultry innovation on display
Enriched Cages Make Cents
Barn Spotlight: The Gras Family