The Latest on Ethanol Co-products

An Update on Dried Distillers Grains and Associated New Products for Poultry. 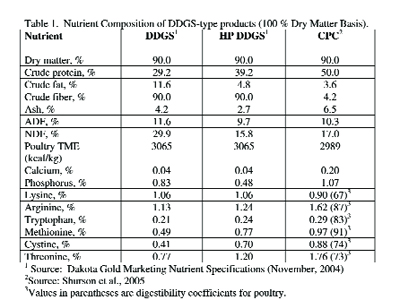 No other grain has been developed and used to produce so many other co-products than has occurred with corn.  Corn can be processed to concentrate starch and sugars, oils, and protein for human or animal consumption.

As a result, there is a large variety of corn co-products are available for use as ingredients in animal feeds depending on the type of milling process used. The wet milling process is used primarily for the production of starch and will produce four different feed ingredients: condensed corn fermented extractives (corn steep liquor), corn germ meal, corn gluten feed (wet or dried), and corn gluten meal.

Corn gluten meal will be used primarily for protein and as a source of xanthophylls for providing pigmentation in poultry carcasses and egg yolks. Dry-grind milling is used for production of ethanol after fermentation of the corn or other grains. The two co-products produced are: corn distillers condensed solubles (liquid), and distillers grains (wet or dry) or dried distillers grains with solubles (DDGS).

As with any growing industry, ethanol production is rapidly evolving to capture both the technology needed to improve yield of ethanol as well as decreasing the fuel costs associated with the production of ethanol and co-products.  These changes will ultimately affect the feeding value of any co-products. 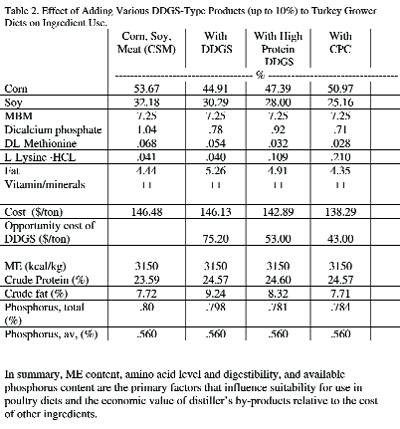 Nutrient contributions of corn DDGS in poultry diets
DDGS can contribute to the dietary content of protein, energy, phosphorus and pigments. Conventional ethanol production processes have minimal impact on the protein and amino acid composition of the product but do impact amino acid digestibility. Similar to corn, protein in DDGS is limiting in lysine, arginine, and tryptophan.1,2 Digestibility of lysine, threonine, and cystine seem to be the most affected.3

Phosphorus (P) content was found to average 0.73 % in DDGS and represents an economic source of available phosphorus.4  Previous studies have indicated the phosphorus availability of DDGS to be greater than that of phosphorus in corn the availability of which is estimated at 28%. 5

Relatively high availabilities were determined for P in excess of 85% for DDGS using a turkey poult bioassay.8,9 Additions of phytase and citric acid in a diet containing 40% DDGS was found to release additional P, improving P availability of the DDGS from 62 to 72%.10

The metabolizable energy (MEn) content of DDGS has been somewhat controversial as the NRC (1994) assigns a relatively low energy level to the ingredient (AMEn of 2480 Kcal/kg). Turkey research feeding trials at Minnesota have used energy assignments in the range of 2810-2850 without any effects on feed efficiency in comparison to a corn-soy control diet. A recent trial tested the assignment of a metabolizable energy value to DDGS.11

Metabolizable Energy Values and DDGS
A grow-finish trial was conducted with turkeys to confirm the appropriate energy value of DDGS to use in diet formulation. Commercial male turkeys (Large White, Hybrid strain) were fed diets varying in level of DDGS (10 or 20% DDGS) and formulated using different levels of MEn assigned to the DDGS during 6 to 19 wks of age. The ME assignments were (kcal/kg): previously determined TMEn in young growing turkeys of 2980; previously determined AMEn with young turkey poults of 2760; and, the NRC (1994) book value of 2480.

The basal diet was composed of primarily corn, soybean meal, poultry byproduct meal and 0.05% supplemental threonine. Diets were formulated on a digestible amino acid basis. A control diet with no DDGS was included. Each diet was fed to 10 replicate pens of turkeys (10 birds/pen). Cumulative 6-19 wk feed efficiency (feed/gain) was poorer for turkeys fed 20% DDGS diets in comparison to 10% DDGS (2.552 vs. 2.522) but neither dietary treatment was different from the control (2.53).

Diets varying in ME assignment did not affect turkey body weight. When the TMEn value was used in formulation, cumulative 6-19 wk f/g was poorer as compared to the NRC value (2.56 vs. 2.52) (P<.05). Determination of energy by TMEn resulted in an overestimation of the energy value of the DDGS when using feed efficiency as the response criteria. While there was no difference in response for the NRC or AMEn energy value, use of the lower NRC energy value could have a large effect on diet cost.

Depending on the desired marketing characteristics, pigmentation of egg yolks and/or carcass may be desirable. A 2005 study examined the inclusion of DDGS at 0, 5, 10, 15% in diets of older laying hens in two trials during 48-56 wks of age and 57 to 62 wks of age.12

New DDGS products
In an effort to develop new value added products and/or improve the efficiency of ethanol production, many new processes are in development or in use. These modifications may be made prior to fermentation or after production of the mash and solubles. Fractionation of the corn to remove some of the fat (degerming) and fiber is being used or considered.

Use of DDGS or extraction of oil from the solubles as a fuel source is also under consideration. The removal of the solubles is particularly troublesome as the syrup or solubles contains significant portions of oil and phosphorus. Recent work has examined the influence of fractionating the corn to remove the germ and pericarp fiber through a modified grinding process or soaking the corn prior to milling (Quick germ/Quick fiber).

The modified DDGS products were higher in protein and lower in total dietary fiber.15

A 2004 study examined a high protein dried distillers grain produced as prototype. Hydrolyzed distillers dried grains (HDG) were obtained from the National Renewable Energy Laboratory. The sample was submitted for chemical determination of proximates, amino acids, and minerals. For digestible amino acid determination, cecectomized chicken roosters were used. Growing turkeys were used for the determination of TMEn. HDG was evaluated for feeding value by inclusion into a poult starter basal diet at 0, 5, 10, 15, and 20%.

An increasing level of HDG was associated with a significant linear decrease (P<0.01) in average daily gain (ADG) during 3-11 day of age and a cubic effect (P<0.02) in ADG during 11 to 18 days. The increase in protein content of the product resulted in less of the critical amino acids (lys, arg, try) in relation to its  protein content.

Information on other potential products has also been provided in a 2005 study. Some high protein products are currently being produced, resulting from modified ethanol production processes. The nutrient composition of these products is shown in
Table 1 compared to a convention product. Again, they are substantially higher in protein than typical DDGS, but lysine and other amino acids are not increased proportionately. The TME value for poultry appears to be overestimated because of the high crude protein content of these products and the low fat content. In fact, the high crude protein: lysine ratio may likely be detrimental to energy utilization because of the additional energy that will be expended by the pig or chick to remove excess nitrogen.

Determining Possible DDGS Inclusion Levels
A turkey grower tom diet (8-11 wks of age) was formulated with least cost software using the nutrient profile of the ingredients as listed above to determine possible inclusion levels and value. Diets were formulated to contain 3150 kcal/kg ME (1428 kcal/lb) and a minimum digestible amino acid content for lysine (1.15%), methionine + cystine (0.74%), and threonine (0.74%). Digestible amino acid values were not available for the Dakota Gold products so average amino acid digestibility coefficients previously obtained from a survey of corn DDGS were used.

Calcium and inorganic phosphorus levels were set at 1.12 and 0.56%, respectively. Inclusion levels of the various products were limited to 10% of the diet. Supplements of lysine and methionine were available for use in all diets. Price of corn, high protein SBM, fat and DDGS products were set at ($/cwt):3.50, 10.50, 17.00, and 4.00.

The conventional DDGS had the highest value based upon the opportunity cost assuming the energy values that were assigned to these ingredients are appropriate, and that a 10% dietary inclusion level results in similar performance (Table 2).
However, the high protein products when priced at $4/cwt lowered total diet cost.

In all diets containing distiller’s by-products, the usage of dicalcium phosphate and the total levels of phosphorus were decreased. Usage of supplemental fat increased in the diets containing the DDGS products and decreased in diet with CPC. The decrease in supplemental fat in the latter diet was probably due to the high ingredient ME value and the concentration of protein allowing for a higher amount of corn in the diet, and a larger decrease in the amount of soybean meal needed.

In summary, ME content, amino acid level and digestibility, and available phosphorus content are the primary factors that influence suitability for use in poultry diets and the economic value of distiller’s by-products relative to the cost of other ingredients.

This article was presented at the 2006 MidWest Poultry Federation Convention in St. Paul, Minnesota. For further information, contact Sally Noll, University of Minnesota.