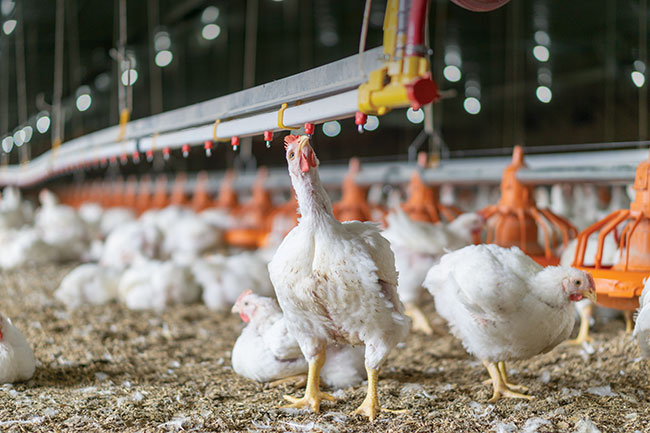 The versatile group of organisms living inside your waterlines could be having a detrimental impact on the vitality of your birds. PHOTO CREDIT: big dutchman

When you enter a poultry barn, how often do you walk to a water line and open it? Have you ever had the water tested for minerals or bacteria? Do you see the birds at the drinkers and assume that all is well? That incorrect assumption can have a significant impact on your bird’s performance and, ultimately, your bottom line.

The problem is, even when you open the water line and look inside, it doesn’t look too bad. So, what exactly could be happening in there? Much more than you realize!

Think of the water line as its own world with entire communities living there. These communities are made of living organisms that have jobs and neighbors. They use the available resources to replicate and thrive. They even have defense mechanisms that protect them and those around them. This versatile group of living organisms could be having a detrimental impact on the vitality of your birds.

Microorganisms can arrive via the litter, through the ventilation, from rodents in the barn, from the birds themselves and even from us. Whatever is in that barn, be it a bacteria, yeast, mold, fungi, algae or virus, it can become airborne. And when they land on the drinking system, microorganisms have multiple methods of movement. They move up and down the water line, often carrying a “friend” with them, like a mold spore, for example.

Some of these organisms move so well that they can actually travel backwards in the system, against the flow of water. They can get into the filters and work their way back to the well. Several times, we have seen a well contaminated not by run-off from the surrounding land but by microorganisms that have worked their way from the barn backwards into the well.

Microorganisms take hold
Once these microorganisms have gotten into the water line, they will then use their flagella and something called “pili” to attach to the waterline, rubber seals or regulator diaphragms. These are hair-like structures that allow them to cling to a surface while they produce a polymeric layer to more permanently affix themselves to the waterline and to protect them from environmental factors.

Here, in this polymeric layer (the beginning of the biofilm), they begin to multiply.

If you do not have a water treatment program, it is at this point that you can begin to lose the battle against microorganisms in your water line. A biofilm can start within 18 hours of bacteria attaching to the waterline.

They then begin to signal to other bacteria by using something called cell-to-cell signaling. This communication can go on between all different types of bacteria, creating a diverse community that includes Salmonella, E.coli, Pseudomonas or Campylobacter, just to name a few. Even molds, algae, yeasts and fungi can contribute to this community.

These organisms are especially good at producing copious amounts of organic material in which bacteria can easily join for protection, then colonize and thrive. This biofilm can attach in small deposits along the line or, if left alone to grow, it can completely cover the inside of the water system. Over time, the biofilm grows and pieces of it will begin to slough off releasing microorganisms back into the flowing water.

At this point, birds can consume the microorganisms as they drink. The microorganisms can also move in the water system to reattach and begin a new section of biofilm. Some bacteria produce a hard, clear biofilm that may not be visible, similar to the plaque on our own teeth. Sometimes, the only way to know that biofilm is present is to have a bacteria test of the water done.

Hope is not lost
There are several factors that you, as a producer, have control over when it comes to the environment inside the water system. Controlling minerals can be a good first step, as all of our source water contains minerals, even municipal water.

These minerals can impact bird health – magnesium, for example, can cause birds to flush. These minerals can seal over drinkers, deposit in the water line creating scale and they can be a great source of food for some bacteria as well.

E. coli, for example, can actually use iron as a source of energy. The mineral scale in a water line creates a rough and uneven surface that becomes an easy grabbing ground on which the bacteria can stabilize itself and begin to produce the polymeric layer that creates the biofilm.

Therefore, reducing minerals in the water can have multiple positive effects not only on the functioning of the equipment but also on the health of the birds and the reduced ability for microorganisms to thrive.

Our intention is to improve performance, but at the same time we may be inadvertently helping entire communities of microorganisms to flourish. Even supplements that kill some of the microorganisms in the water line, such as iodine, copper sulfate or organic acids can allow other groups of organisms to survive.

There are acid loving bacteria called acidophiles and then there are the bacteria that can adapt to the acidic environment such as E. coli. These acid-loving and adaptable microorganisms can overtake the flora of the water system in the absence of the competing bacteria. Molds and algae are particularly good at this and tend to clog a line quickly with their effusive production of organic material.

There is valid evidence that numerous types of supplements, including organic acids, can improve bird performance. We just have to make sure that after the use of these supplements in the water system, we have a planned water treatment program to combat any growth we may have promoted inside the water line.

Vital times
There are three vital times to pay attention to and treat the water.

The first is during the initial few weeks of the bird’s life. During this time, the water is warm and moving very slowly with the birds continuously hitting the drinkers and “re-inoculating” the water line. This environment is ideal for microorganism growth.

The second vital time is following the addition of a supplement or 24 hours after the completion of a vaccination program through the water line.

The third vital time, but definitely not the least important time, is when the facilities are empty. This is your chance to properly clean the water lines and begin the next grow-out with a water system you would take a drink out of! I emphasize properly here – read instructions, get the proper tools and be prepared to do a good job of cleaning the lines when the birds are gone.

Throughout the life of a flock, every producer should have ongoing water treatment or a plan that occurs at least on a weekly basis for 48 hours. It should include cleaning the lines with a proven water line cleaner when the facility is empty.

Think every day where you want your birds to use their energy. If they are having to use it to fight bacteria every time they get a drink, they won’t be able to use that energy for feed conversion and growth rate.

Everyone needs to have their water tested for minerals and bacteria and set up a water treatment program. The plan should include treating water while birds are in the barn and a thorough cleaning of the water lines when the facility is empty.

Mary Katherine Foy is the director of technical services for Proxy-Clean Products of Melissa, TX. The Water Smart Program is a step by step plan of action for providing quality water to animals on the farm. It is an initiative developed by Weeden Environments of Woodstock, Ont., who is the manufacturer’s representative for Proxy-Clean in Canada and Jefo Inc., of Saint Hyacinthe, Que., who is the national distributor.