It’s going to be an interesting year ahead for the Chicken Farmers of
Ontario as new staff and leaders grow into their roles. Last year saw a
high turnover of people at the organization, an issue that made some
producers at the 2007 Annual General Meeting uncomfortable. 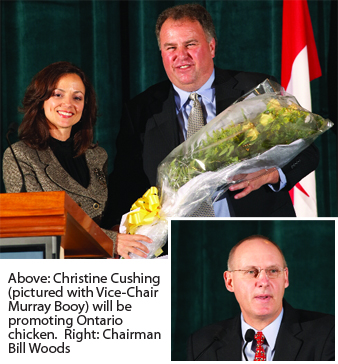 It’s going to be an interesting year ahead for the Chicken Farmers of Ontario as new staff and leaders grow into their roles. Last year saw a high turnover of people at the organization, an issue that made some producers at the 2007 Annual General Meeting uncomfortable. New general manager Roelf Woldring, who called his tenure so far a “learning 20 months,” explained that the reasons for the staff rollover are not black and white. Some retired, some left for other reasons and three people were fired, but he’s “not planning on having those type of discussions with that many people this year.”

Instead Woldring will be focusing on the road ahead. “I’m not a farmer,” explained Woldring, but he does bring 40 years of business experience to the table, he does pay taxes and he does eat food. And that, he says, qualifies him to lead from a taxpayer and consumer perspective. Supply management has benefits for both of these groups and he hopes to rephrase the dialogue that will help to clarify and promote supply management.

Strategic Planning
Woldring outlined an external strategic plan that included providing collaborative leadership in order to maintain effective government, industry and processor relationships. It’s not an easy process, he explained, especially when people don’t feel that their particular point of view is being heard.

The concept of working together echoed through several presentations, including the keynote evening address
of Minister of Agriculture Leona Dombrowsky. She summarized that future success will depend upon two
factors: the ability of producers to supply processors and the ability of the industry to pull together for collaborative, not imposed, solutions.

She strongly suggested that with growing global competition the industry needs to work as a united team to keep pace and she challenged industry leaders to build a winning strategy, pledging that the ministry will be there to support it.

NFPC Report
Gordon Hunter spoke as the new vice chair of the National Farm Products Council. Hunter, who is admittedly still getting up to speed on issues, grew up on an egg farm in New Brunswick before supply management so he knows what life was like without it. He called supply management a “system developed on co-operation and collaboration, not conflict and confrontation.”

As a Queen’s Counsel lawyer, Hunter has concerns with the legal challenges in the supply management system, although he noted that the CFC has been more successful than other commodities. The dispute resolution council that was put in place has only had limited success and Hunter acknowledged that maintaining the strength of the supply management pillars at the WTO negotiations, “would be more successful if less time was spent on differences amongst ourselves.”

Hunter has temporarily become acting chair of the NFPC, one of the major changes at the top of the organization along with two other vacancies in the nine-member council. The terms of four other members are set to expire at the end of the year. When these changes are compounded with changes to administration, Hunter, whose term expires in January 2008, stressed the need for steps to be taken to manage the transition to ensure the flow of activities within the organization.

David Hope, chair of the Ontario Farm Products Marketing Council, is well aware of the strength of the co-operation between producers, processors and government that built the system, and with pressure from the WTO talks, this co-operation has now extended to all supply managed industries. He warned that internal challenges from regional pressures and differential growth are a significant threat to the success of the industry and cannot be ignored. “Regulations do not solve problems, people do,” voiced Hope. “Our ability to solve problems will decide our future. More finger pointing will not get us anywhere.”

Board Changes
Murray Booy announced that he has chosen to step down to spend more time with his family and he would not seek re-election as the chair of the CFO. Domestically, Booy noted the challenge not to undersupply the market and pointed to the challenge of interprovincial marketing as a frustrating issue. The board is awaiting the results of a comprehensive study on the dynamics of Ontario/Quebec live chicken flow to determine a course of action and meanwhile he urged producers to support their provincial processors.

Internationally, despite the lack of progress in the WTO talks, which will not likely see any progress until after the U.S. presidential election in 2008, Booy urged members to keep up the pressure and continue take every opportunity to promote supply management to their elected officials and within their communities.

It was also announced at the meeting that Henry Bos is stepping down from the board of directors in District 5. Henry Zantingh of Smithville, Ont., will take over the position.

Change of Focus
As far as continuing to tackle the biosecurity issues that dominated in 2006, Roelf Woldring was proud of the efforts of all of the feather boards across the country. “Viruses don’t understand human forms of organization; viruses don’t care,” he said as he reminded the conference that we must remain vigilant and prepared to respond in a co-ordinated manner should the need arise.

To that end, the CFO has launched a chicken disease emergency line: 1-877-SOS-BYRD as part of their Keep It Out, Keep It In disease prevention and containment program. Farmers are encouraged to use this hotline if they suspect they have an infectious poultry disease on their premises. CFC Chair David Fuller, stating, “There will be a next time,” cautioned producers to continue to use strict biosecurity to keep disease out, and if it gets in he advised quick and effective action to keep it in.

Fuller acknowledged that financial compensation is critical to ensuring early disease reporting and praised the value of OFFSAP certification. In seven provinces there are 100 per cent of farms audited at present with nearly 80 per cent compliance nationwide. The goal is to have full compliance by the end of 2007.

Woldring, when answering a question regarding the safety standards for imported chicken, commented that once everyone is OFFSAP certified they can press the CFIA more to tighten import standards.

But the media coverage surrounding avian influenza has subsided for now so the CFO will shift its attention to promoting food safety in the upcoming year with the motto, “Safe, Nutritious Chicken: Meeting Consumers’ Needs.”

With this in mind the newest member of the CFO family is celebrity chef Christine Cushing, who will be the official spokesperson and ambassador for Ontario chicken. Her media tour across the province will feature some new original tasty chicken recipes and take the message of food safety to the public. This initiative will replace the Chicken Lover Magazine.

The average live price in 2006 was 113.09 cents per kilogram, 4.6 per cent lower that the 2005 average of 118.32 cents per kilogram, mostly attributed to lower feed costs in the first half of the year. Canadian chicken consumption per capita rose last year to 31.2 kilograms from 30.1 kilograms in 2005.n